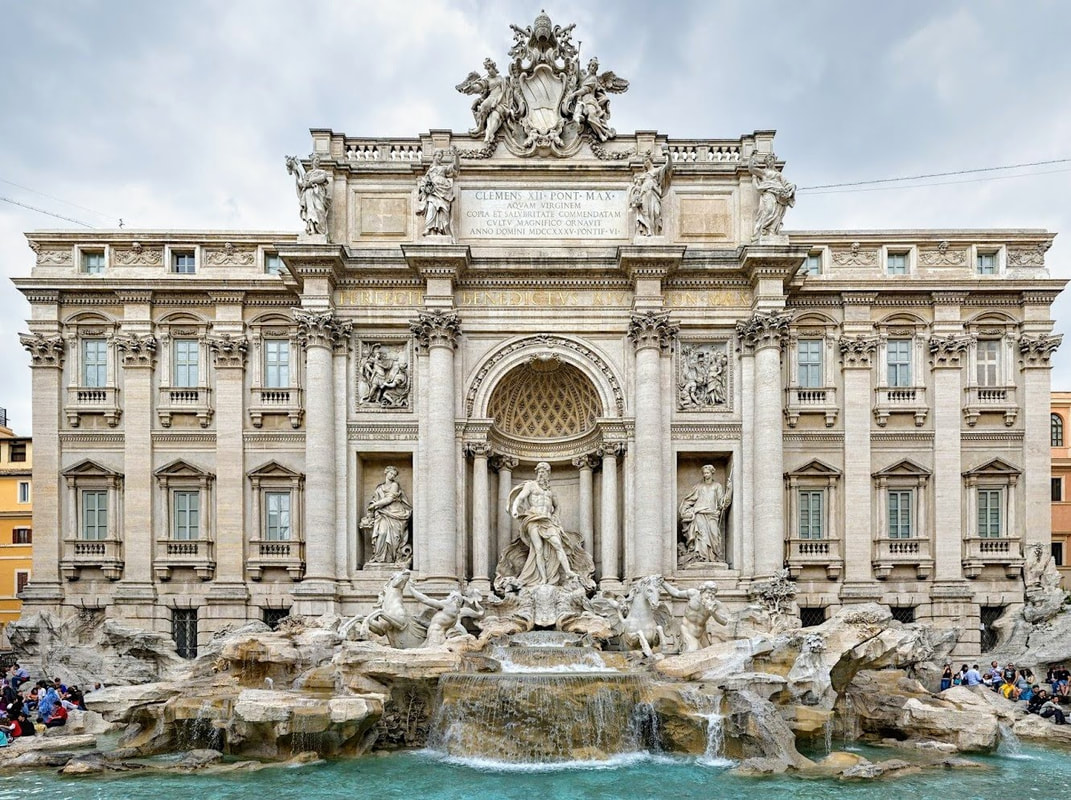 ​The building of the Trevi fountain was partly funded by a tax on wine, which led one wag to quip: ‘He taxed our wine to give us water!’.

The focal point of the fountain is the statue of Oceanus by the Roman sculptor Pietro Bracci (1700-73). The colossal personification of water in all its many forms stands on a shell-shaped chariot, which is being drawn by two sea-horses led by a pair of Tritons, also the work of Bracci. Oceanus holds a sceptre as a symbol of his authority over all water.

Oceanus is flanked by allegorical statues of Abundance and Health, the work of the Florentine sculptor Filippo della Valle (1698-1768). The statues are surmounted by two reliefs: Agrippa Approves the Design of the Aqueduct by Andrea Bergondi and A Young Woman Indicates the Spring to Some Soldiers by Giovanni Battista Grossi. The four allegorical statues that adorn the attic storey of the fountain illustrate the benefits of water to nature: the Abundance of Fruits (Agostino Corsi), the Fertility of the Fields (Bernardo Ludovisi), the Gifts of Autumn (Francesco Queirolo) and the Amenities of Meadows and Gardens (Bartolomeo Pincellotti).

The Trevi is more than just a fountain; it is what is known as a mostra terminale, a display point marking the arrival of an aqueduct into the city, in this case the restored Acqua Vergine Antica (Aqua Virgo in Latin). The aqueduct was originally constructed in 19 BCE by Marcus Vipsanius Agrippa (63-12 BCE), general and right-hand man of the emperor Augustus, to supply water to his recently constructed set of baths near the Pantheon. The aqueduct drew water from the springs at Salone, which lies 9 miles/15 km from Rome.

The fountain is crowned with the coat of arms of Pope Clement XII. The inscription proclaims: CLEMENS XII PON MAX / AQVAM VIRGINEM / COPIA ET SALVBRITATE COMMENDATAM / CVLTV MAGNIFICO ORNAVIT / ANNO DOMINI MDCCXXXV PONTIF VI (Clement XII, Pontifex Maximus, embellished with splendid refinement the Aqua Virgo, esteemed for its abundance and wholesomeness, in the year of the Lord 1735, the sixth of his pontificate).

At a lower level, there are two additional inscriptions: PERFECIT BENEDICTVS XIV PON MAX (Completed by Benedict XIV, Pontifex Maximus) and POSITIS SIGNIS ET ANAGLIPHIS TABVLIS IVSSV CLEMENTIS XIII PON MAX OPVS CVM OMNI CVLTV ABSOLVTVM A DOM MDCCLXII (With the placing of the statues and reliefs by order of Clement XIII, Pontifex Maximus, the work was completed with every refinement in the year of the Lord, 1762).

When the Trevi Fountain was unveiled to the public on May 22nd, 1762, it instantly became one of the marvels of Rome.

The backdrop to the fountain is the 16th century Palazzo Poli, which was reworked in the 18th century by Luigi Vanvitelli (1700-73), an erstwhile pupil of Nicola Salvi.

The practise of throwing coins into the fountain only dates back to the 19th century.

The Trevi Fountain has played a starring role in many films, most notably in Fellini's La Dolce Vita (1960). In one of the movie's most famous scenes, Anita Ekberg takes a midnight dip in the fountain, soon to be joined by Marcello Mastroianni. Following the death of the great Italian actor, on December 19th 1996, the fountain was temporarily turned off and draped in black.
Gallery 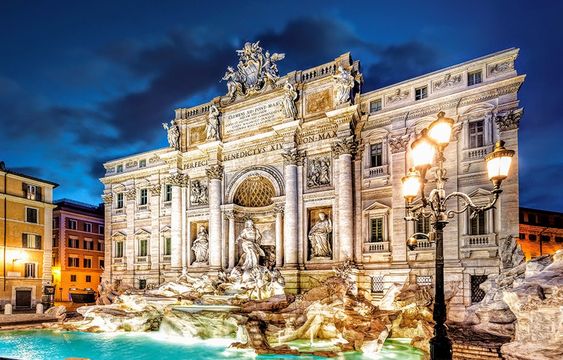 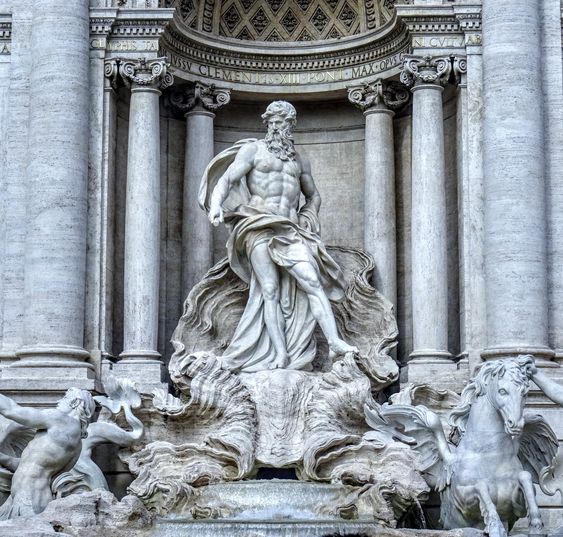 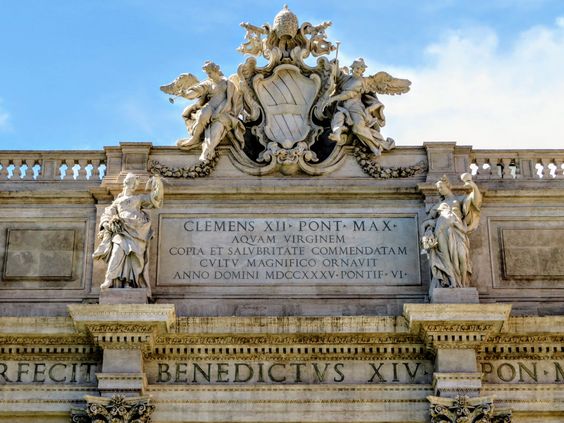 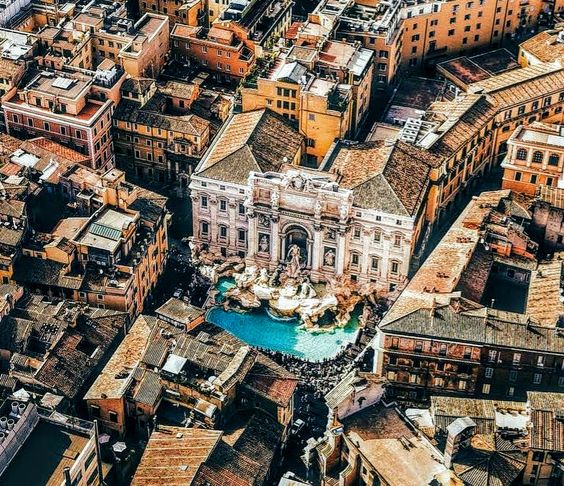 Aerial view of the Trevi Fountain 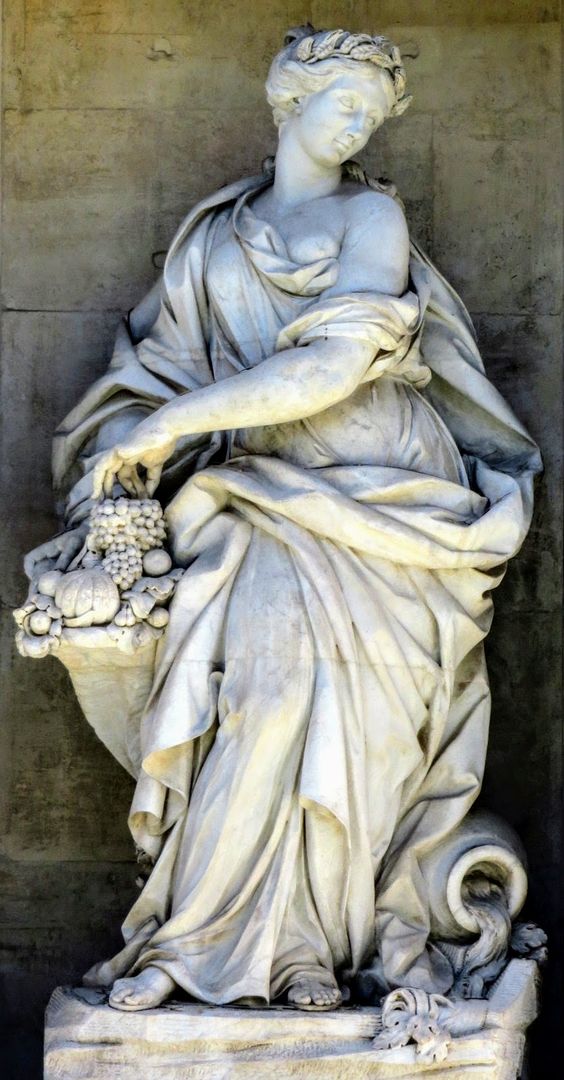 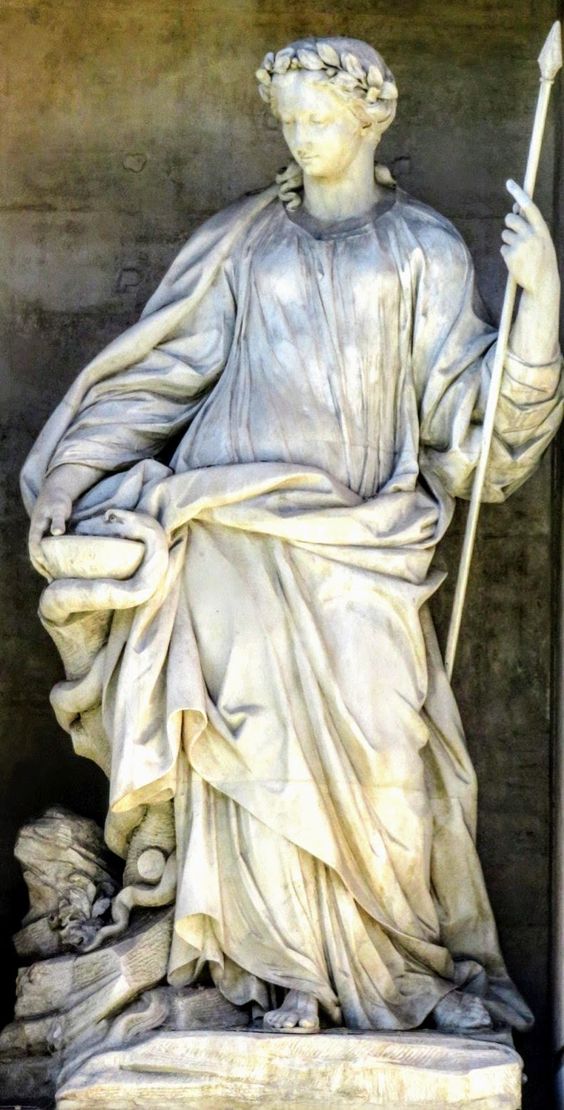 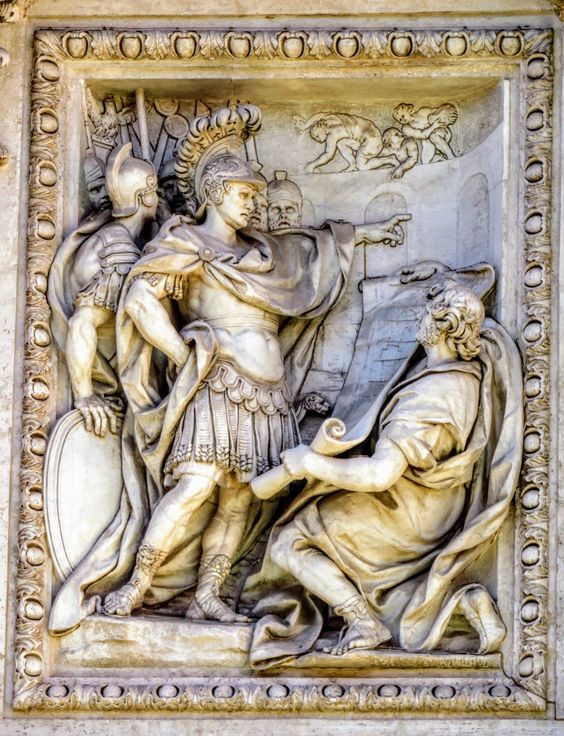 Agrippa Approves the Design of the Aqueduct, relief by G.B. Grossi 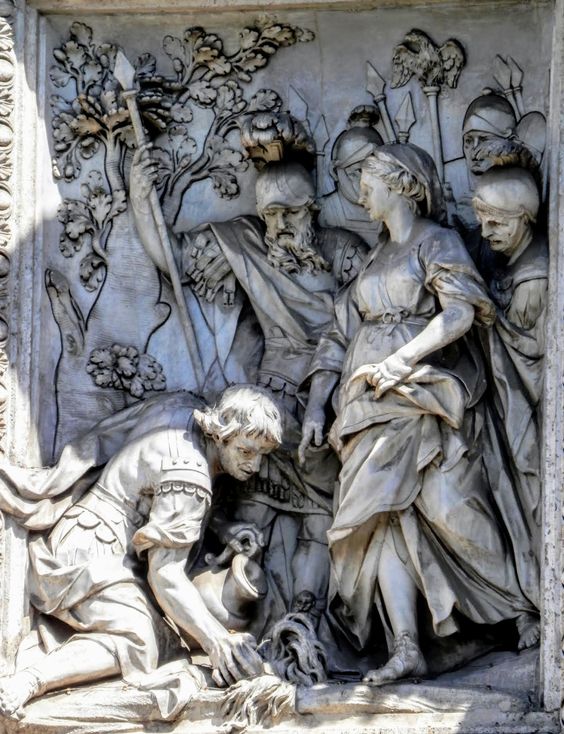 A Young Woman Indicates the Spring to Some Soldiers, relief by Giovanni Battista Rossi 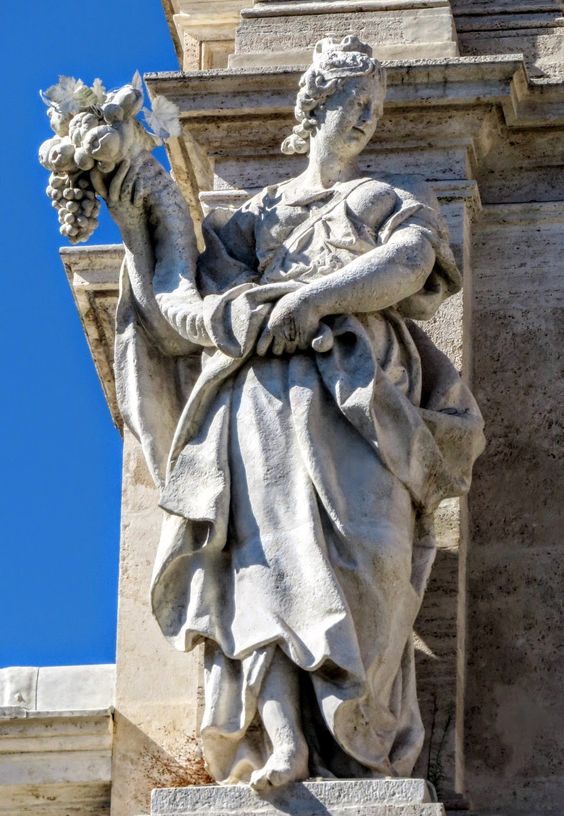 The Abundance of Fruits by Agostino Corsi 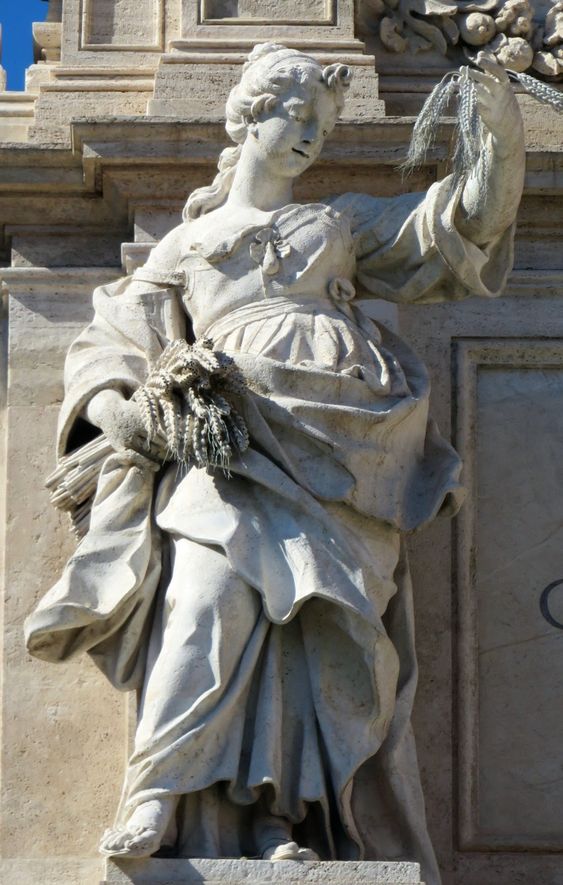 The Fertility of the Fields by Bernardo Ludovisi 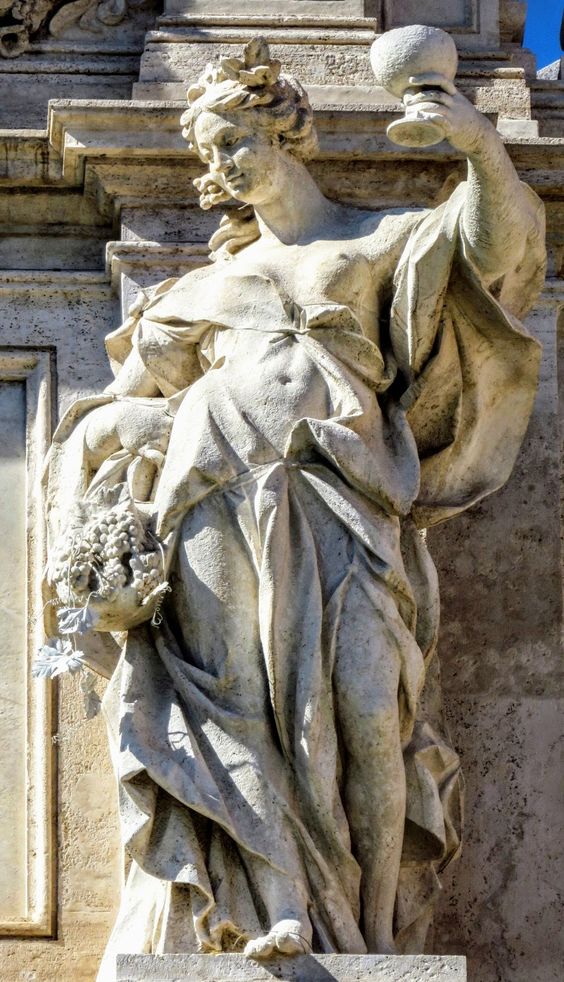 The Gifts of Autumn by Francesco Queirolo 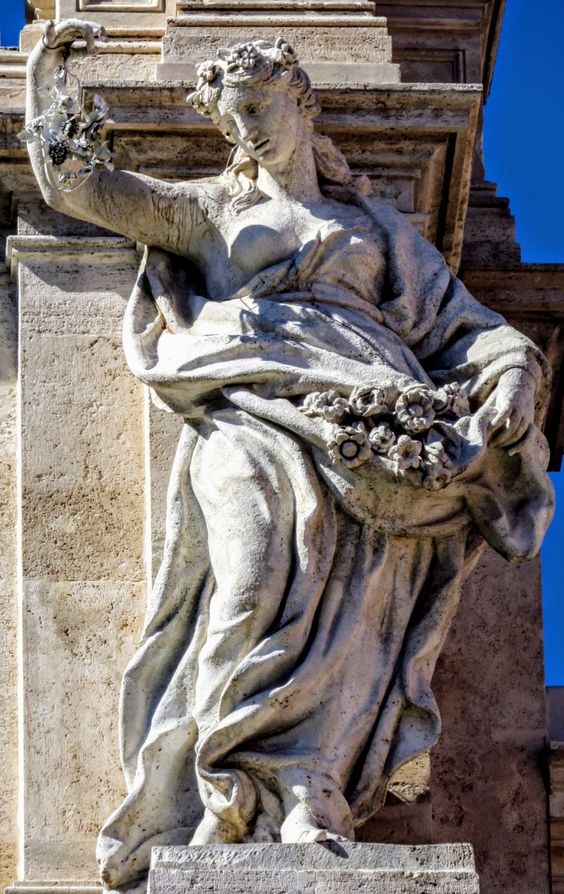 The Amenities of Meadows and Gardens by Bartolomeo Pincellotti 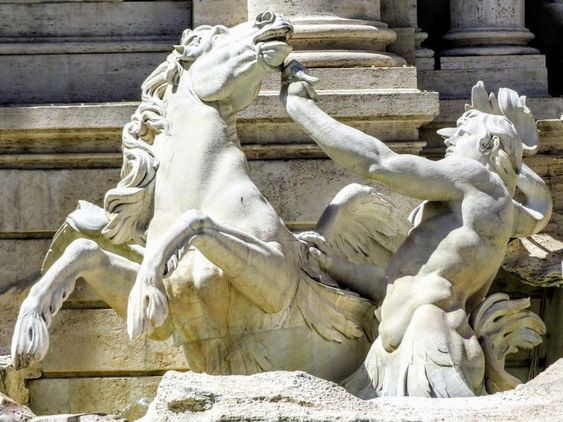 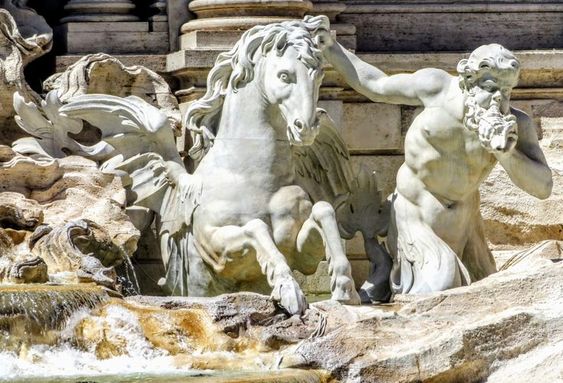