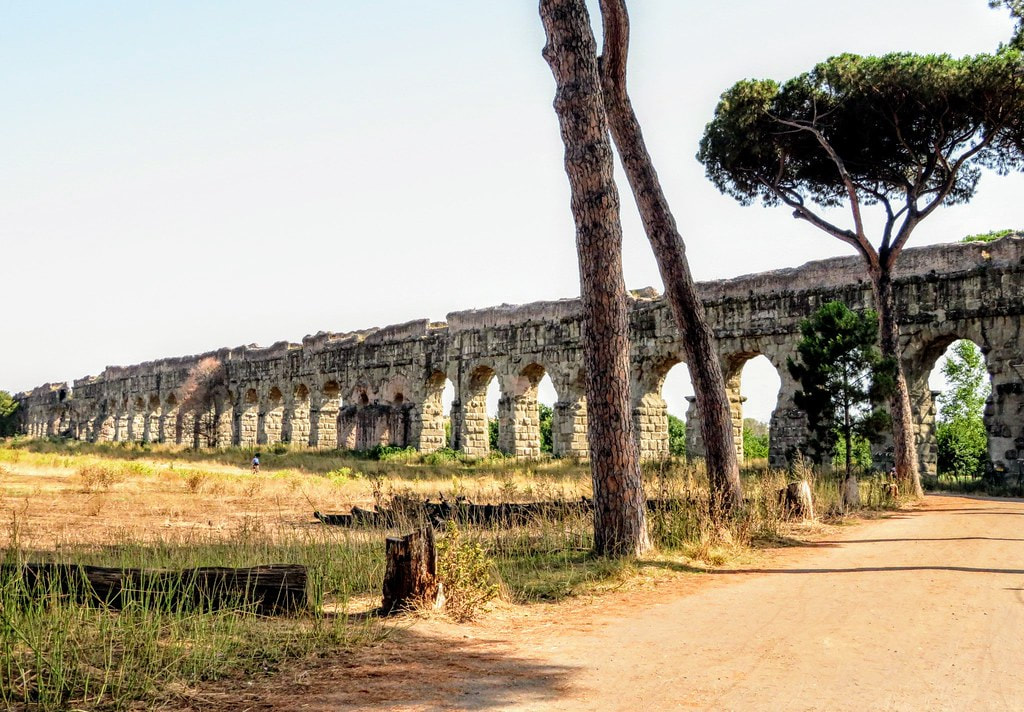 Park of the Aqueducts (Parco degli Acquedotti)
The aqueduct, one of the great achievements of ancient Roman engineering, was an artificial channel that was built to bring water from outside sources into cities or towns. The water flowed along a conduit, which, depending on the terrain, ran underground or was carried over arches. Marcus Vitruvius Pollio (flourished 1st century BCE), in his famous multi-volume treatise on architecture (De Architectura), recommended a fall of 6 inches every 100 feet to obtain a steady flow in the supply.

To keep the water cool and free from any impurities the specus (channel) was covered and numerous small apertures or lumina were inserted at regular intervals to induce the circulation of fresh air. On arrival in the city, the water was distributed by a series of lead or earthenware pipes from the main castellum or water tower.

To supply water to the city of Rome, a total of eleven aqueducts were built, delivering an estimated 317 million gallons of water per day.

1. Aqua Appia
The Aqua Appia was built by the censor Appius Claudius Caecus and completed in 312 BCE. It was 16 kilometres long.

3. Aqua Marcia
The Aqua Marcia was built between 144 and 140 BCE by the praetor Quintus Marcius Rex. It was 91 kilometres long.

4. Aqua Tepula
The Aqua Tepula was built in 125 BCE and was 18 kilometres long. It drew its warm waters (16/17 degrees) from a spring at the foot of the Alban Hills, between Grottaferrata and Marino.

5. Aqua Julia
The Aqua Julia was built in 33 BC by Marcus Agrippa and was 22 kilometres long.

6. Aqua Virgo
21 kilometres long, the Aqua Virgo was completed in 12 BCE by Marcus Agrippa. The aqueduct largely supplied water to the set of public baths that Agrippa had built in the Campus Martius.

7. Aqua Alsietina
33 kilometres long, the Aqua Alsietina was built circa 2 BCE. The water, however, was not suitable for drinking, and the emperor Augustus used the aqueduct to feed the naumachia that he had built in Trastevere.

8. Aqua Claudia
The Aqua Claudia was started in 38 CE by the emperor Caligula (r. 37-41), but was completed in 52 CE during the reign of his successor, the emperor Claudius (r. 41-54). 69 kilometres long, it was fed by springs near the town of Subiaco.

The remains of six of the aqueducts (Aqua Anio Vetus, Aqua Anio Novus, Aqua Marcia, Aqua Tepula, Aqua Julia, Aqua Claudia) can be seen in the Parco degli Acquedotti, which lies five miles to the south-east of the centre of Rome.