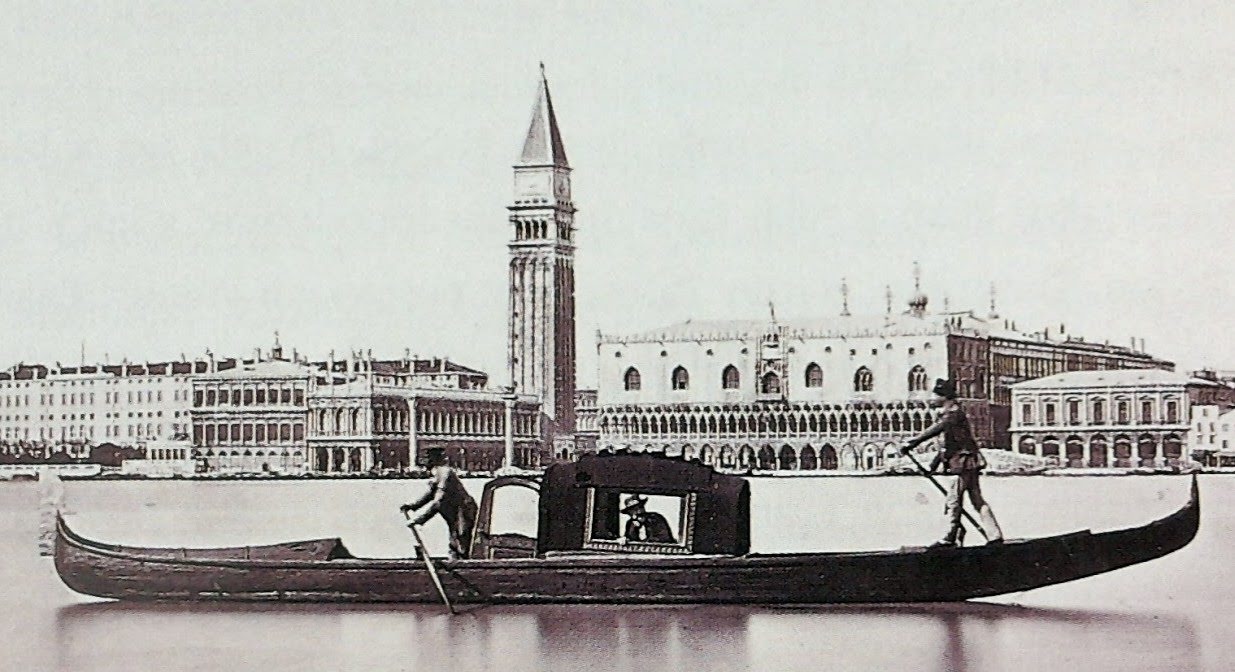 A gondola in Venice, photograph by Carlo Naya
"Though there are some disagreeable things in Venice there is nothing so disagreeable as the visitors." The great American novelist Henry James (1843-1916) made this observation more than a century ago. What on earth would he say if he visited the city today!

James paid his first visit to Venice in 1869. Over the next four decades he would return many times, paying his last visit in 1907. The novelist’s biographer, Leon Edel, called Venice "one of the greatest topographical love affairs of James' life."

Between March and June, 1881, James rented rooms on the fourth floor of the Pensione Wildner where he worked on completing his novel The Portrait of a Lady. “I lodged on the Riva, 4161, quarto piano. The view from my window was 'una bellezza'.”

In 1887 (February to March), James stayed at the Casa Alvisi, the guest of Mrs Katherine de Kay Bronson. He wrote: “Casa Alvisi is directly opposite the high, broad-based florid church of Santa Maria della Salute--so directly that from the balcony over the water-entrance your eye, crossing the canal, seems to find the key-hole of the great door right in a line with it; and there was something in this position that for the time made all Venice-lovers think of the genial padrona as thus levying in the most convenient way the toll of curiosity and sympathy.”

He returned to the city in June and stayed for the first time at the Palazzo Barbaro, the guest of Daniel Sargent Curtis and Ariana Wormeley Curtis. In 1885 the Curtises had bought the second piano nobile and the upper part of the palazzo. James completed his novella The Aspern Papers, which is set in Venice, while he was staying in the Palazzo Barbaro.

In July, 1892, James stayed again at the Palazzo Barbaro, but this time as the guest of Isabella Stewart Gardner, who had rented the property for the summer from the Curtises. As the house was full of people, a bed was made up for HJ in the 'divine old library’.

In the spring and early summer of 1894 James stayed at the Casa Biondetti, which lies on the Grand Canal. James had returned to Venice to work, in his capacity as literary executor, on the papers of fellow novelist and friend, Constance Fenimore Woolson, who had taken her own life on January 24th.

In June 1907, after an absence of more than half a dozen years, James paid what would be his last visit to both the Palazzo Barbaro and to Venice, itself.