Venice:
​The Old Lady of the Mortar 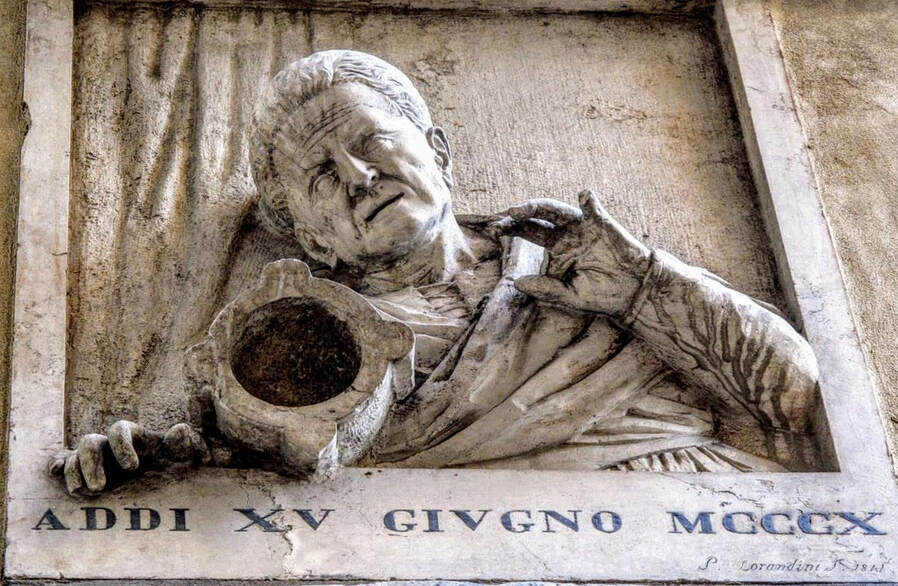 Bas-relief of Giustina Rossi by Pietro Lorandini
The Merceria is the main thoroughfare which links Piazza San Marco to Ponte di Rialto. It is invariably crowded and yet I wonder how many of the people who amble up and down the narrow street notice the image of an old woman on the wall above the first archway on the left (on leaving the Piazza).

She seems to be in the act of emptying a chamber pot into the street below, not an uncommon practise in days gone by. However, the vessel she is holding is not a chamber pot, but a mortar, as in mortar and pestle.

The bas-relief recalls a critical moment in Venetian history when the action of a certain resident of the Merceria, an old lady by the name of Giustina Rossi, saved the Most Serene Republic from a coup d'état.

On June 15th 1310, Bajamonte Tiepolo, a disgruntled nobleman bent on seizing power, was marching with his troops along the Merceria in the direction of the Doge's Palace. Just before the insurrectionists burst into Piazza San Marco they paused. This would prove to be a fatal mistake.

Signora Rossi, curious to see what all the fuss was about, opened her window and looked out. She had been busy grinding herbs and had taken her mortar with her to the window. As she leaned out she dropped the mortar (no one knows whether it was by accident or design) onto the head of Tiepolo's standard-bearer, killing him outright. Tiepolo immediately took fright, retreated and the rebellion was over. And all thanks to the woman who came to be known as la vecchia del mortaio (the old lady of the mortar).

The Republic asked how it could reward her and she asked for two things: the freezing in perpetuity of her rent and the right to display the banner of St Mark, patron saint of Venice, on the Feast of St Vitus (June 15th). She was granted both requests.

The building in which Giustina Rossi lived was demolished in the 19th century and the bas-relief, the work of Pietro Lorandini, was erected in her memory.