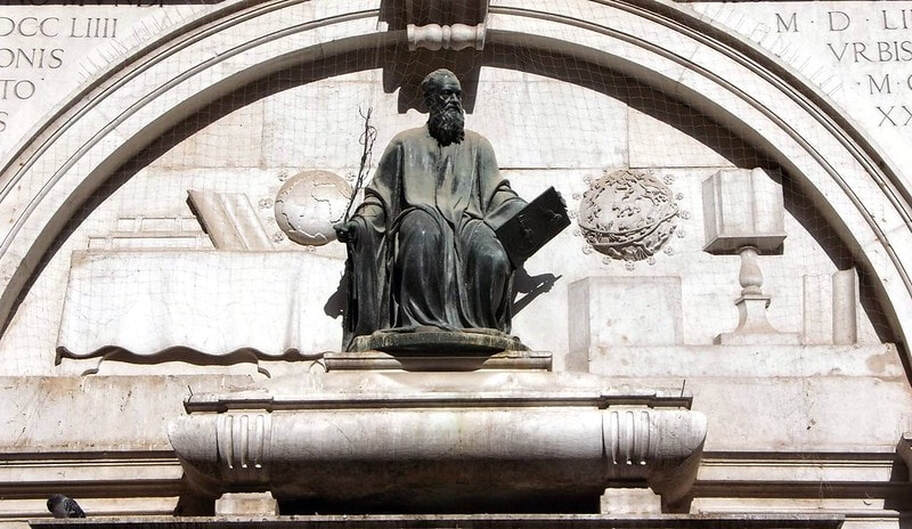 Physician, philologist, astrologer and patron of the arts, Rangone was born in Ravenna in 1493; his original name was Tommaso Giannotti (or Zannotti). The young Tommaso studied medicine and philosophy at the university of Bologna, graduating in 1516. After a spell teaching at the university of Padua he entered the service of Guido Rangone (a count from Modena) as a physician and astrologer. He would later ask permission to adopt the count's surname as his own.

In 1534 Rangone settled in Venice, where he became a highly influential figure. He was an important patron of the arts, but his patronage came at a price. And that price was his self-glorification.

In the 1550s Rangone offered to finance the building of a new façade for the church of San Zulian, but only on condition that it would display a bronze statue of the patron. The church agreed and for the last 450 or so years Rangone has sat above the entrance, a position normally accorded to a saint. He holds in his right hand the plant (the source of his wealth), which had been discovered in South America and was used to treat syphilis.

To reflect his familiarity with ancient languages, there are inscriptions in Greek, Latin and Hebrew. ​The Latin inscription gives biographical information about TR, the one in Greek describes his cultural merits, while the Hebrew inscription alludes to the chances of living to the ripe old age of 120.

The latter is a reference to a manual that Rangone wrote: Sul Come Condurre la Vita Fine a 120 Anni (On how to live to the age of 120). He fell somewhat short of that span in his own life, dying in 1577 at the age of eighty-four.

His funeral, which he himself had choreographed, was a splendidly extravagant affair. Rangone is buried in the church of San Zulian.​