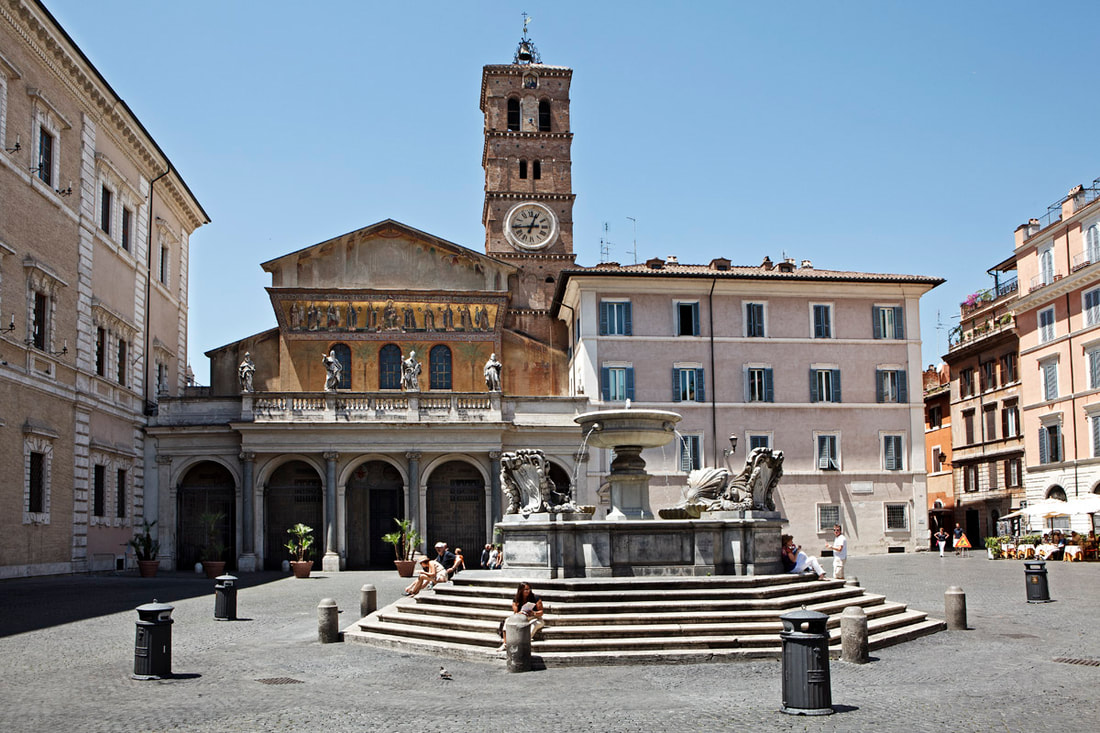 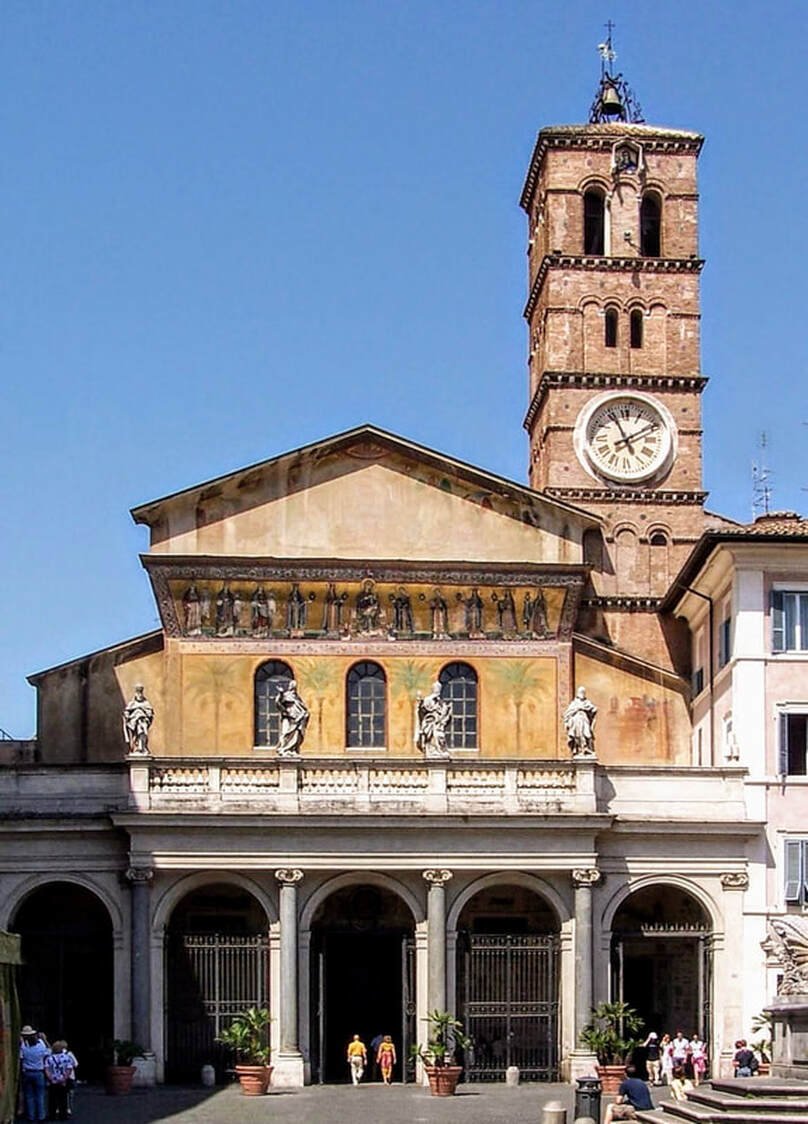 Santa Maria in Trastevere
The church is entered through a portico (1702), the work of Carlo Fontana. The walls of the portico are covered with fragments of antique and medieval inscriptions. There are also two very faded frescoes of the Annunciation, both of which, unusually, depict the Virgin on the left of the scene. If you look very carefully at the fresco on the south wall, you will see a rare example of the Incarnation of Christ taking the form of a small, naked figure holding a cross.

The main door to the church bears an inscription from Psalm 118: HAEC EST PORTA DOMINI IVSTI INTRABVNT IN EAM (This gate of the Lord, into which the righteous shall enter, KJV). It is surmounted by the Greek letters MHΘY (Meter Theou, Mother of God). Mary was declared to be the Mother of God at the Council of Ephesus (431) and Santa Maria in Trastevere claims to be the oldest Marian church in Rome. 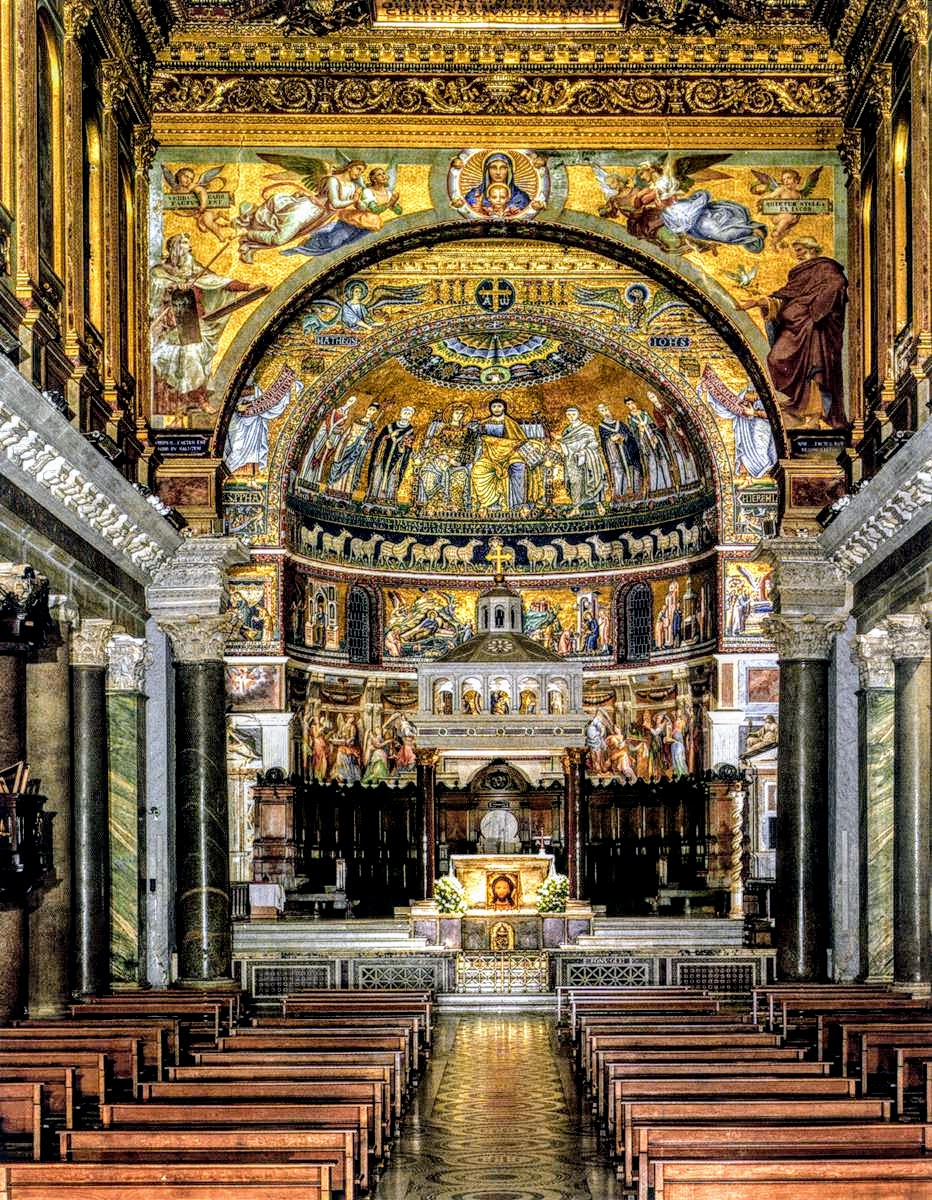 Nave
The nave is divided from the aisles by 21 antique granite columns of varying lengths and thicknesses, which were clearly salvaged from several different buildings. The columns sport both Ionic and Corinthian capitals, some of which are carved with the heads of pagan deities. The columns also support architraves rather than arches and this creates a powerful horizontal accent, which draws the eye to the apse. The triumphal arch sits on two great porphyry columns, which sport finely carved classical capitals. The frescoes on the triumphal arch are from the 19th century.

The Cosmatesque floor was re-laid in the 19th century.

The beautiful ambry (or aumbry/almery), which is on the right wall at the beginning of the nave, is thought to be the work of the Neapolitan sculptor, Mino del Reame, who was active in Rome between 1460 and 1480. An ambry is used for the storage of the oils used in the sacraments.

The medieval mosaics on the arch and half-dome of the apse are the glories of the church and date back to the time of Pope Innocent II (1130-43). The scenes of the Life of the Virgin on the lower register are the work (c. 1298) of Pietro Cavallini, a Roman painter and mosaicist. The mosaics are generally hailed as marking a major move away from the Byzantine style towards a more naturalistic form of representation. The mosaic above the episcopal throne is also by Cavallini and depicts the Madonna and Child flanked by St Paul, St Peter and the donor, Cardinal Bertoldo Stefaneschi.

In front of the altar, to the right, a spot marked FONS OLIE indicates the place where, according to one legend, a spring of oil suddenly began to flow in 38 or 37 BCE. This was later interpreted by the Christian community as a sign from God announcing the advent of his son. According to another legend, the oil actually sprang up on the year of Christ’s nativity. 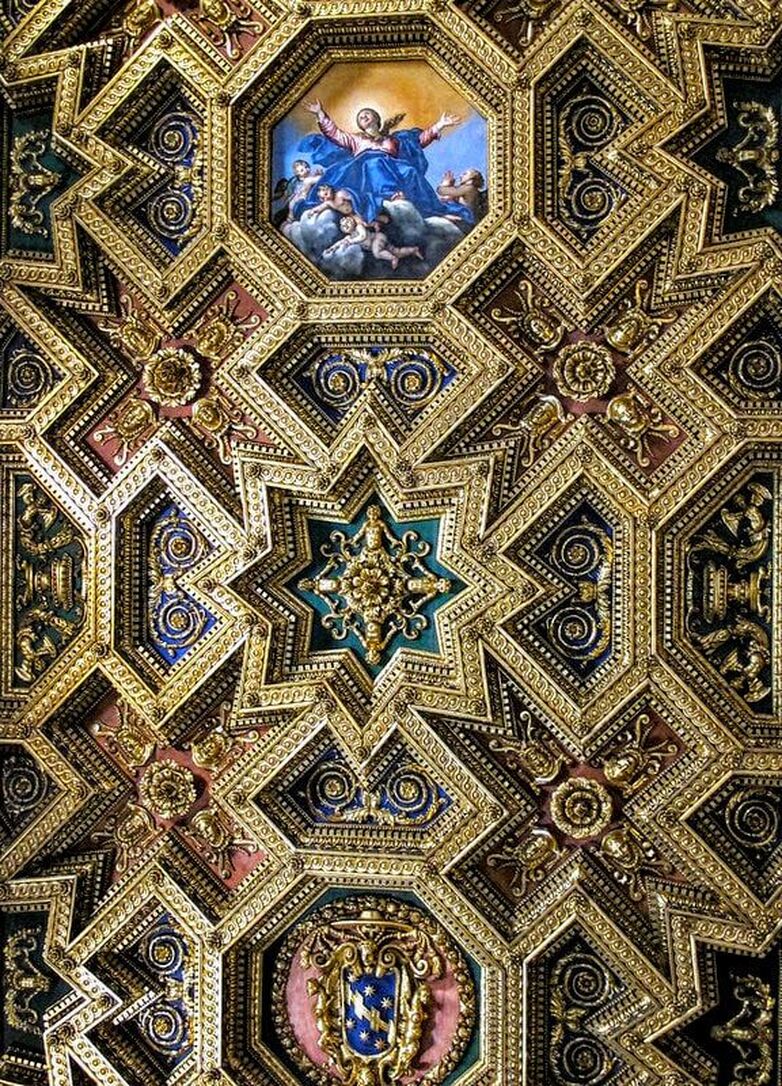 The fifth chapel in the left aisle is the Cappella Avila, which was designed by Antonio Gherardi at the end of the 17th century. The chapel’s dome is a gem of Baroque architecture. In the centre of the cupola, we see four angels holding up a small temple or tempietto, which pierces the oculus.
​
In the sacristy, which leads off the left aisle, can be found two treasures, which are often overlooked. They take the form of two tiny ancient Roman mosaics (1st century CE) from Palestrina; one depicts birds, while the other depicts a seaside scene with boats and dolphins.

Towards the end of the aisle is the tomb of Cardinal Philippe d’Alencon, who died in 1397, the work of the Florentine sculptor Giovanni d’Ambrogio (active 1382-1418). The tomb boasts a beautiful bas-relief of the Death of the Virgin Mary.

The left aisle leads into the Altemps Chapel.

The Cappella Bussi, the first chapel off the right aisle, is dedicated to Santa Francesca Roma, and served as the funerary chapel of the Bussi family, to which she belonged. On the left wall is a memorial to Cardinal Giovanni Battista Bussi (1726) and on the right one to Cardinal Pietro Francesco Bussi (1765). Both were designed by Francesco Ferrari. The Bussi family's rather creepy coat of arms comprises nothing more than a pair of eyes!

At the end of the right aisle is the Cappella del Coro d'Inverno (Chapel of the Winter Choir), so called because this is where the Divine Office was sung during the winter months when the main body of the church was too cold, especially in the early morning. In 1759 the chapel was restored by Henry Stuart, Duke of York, on the occasion of his being elected a cardinal. Upon the death of his brother, ‘Bonnie’ Prince Charlie, in 1788, the cardinal came to be known by the Jacobites as King Henry IX of England and Ireland and King Henry I of Scotland. This explains the presence of the royal coat of arms above the entrance. ​ 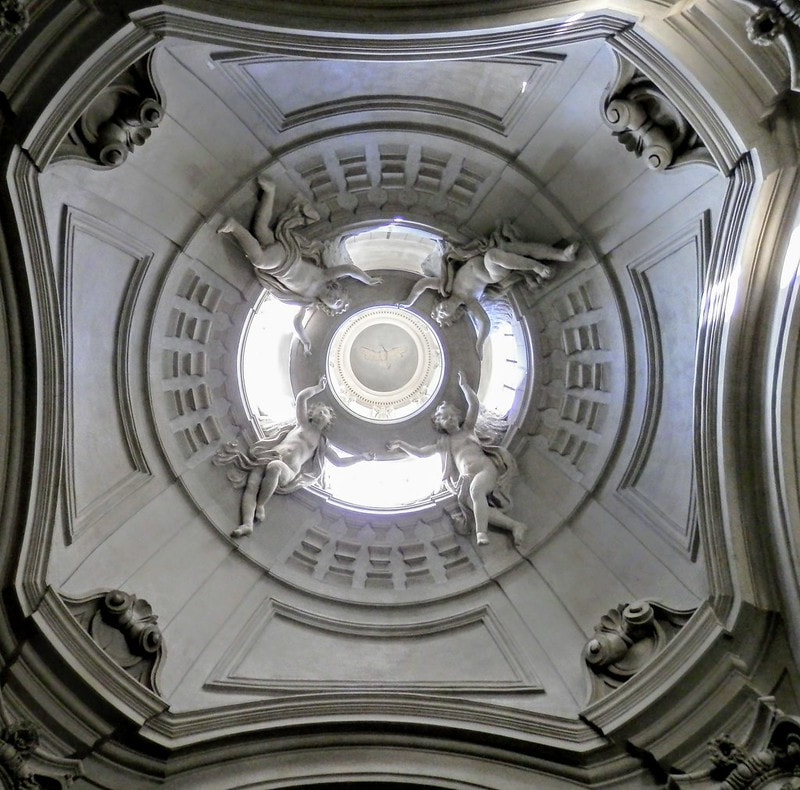 Vault of the Avila Chapel
Gallery 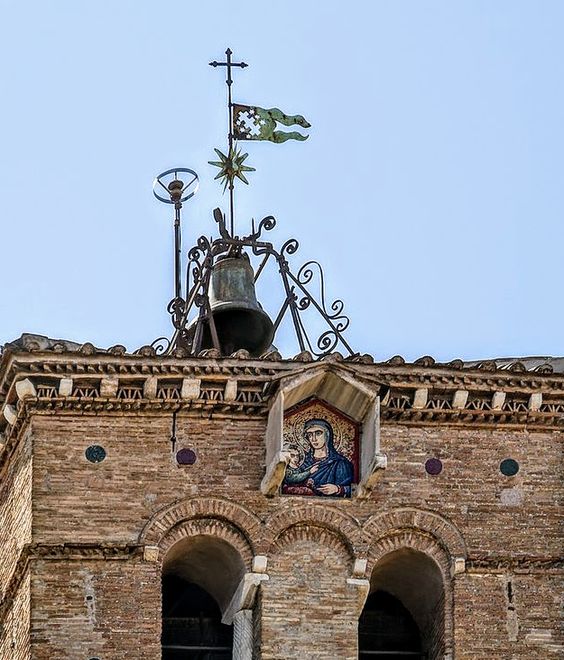 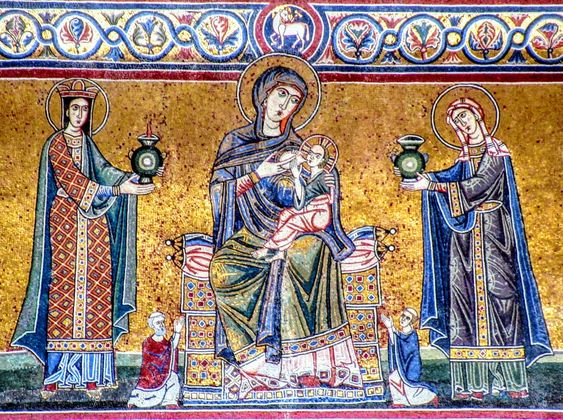 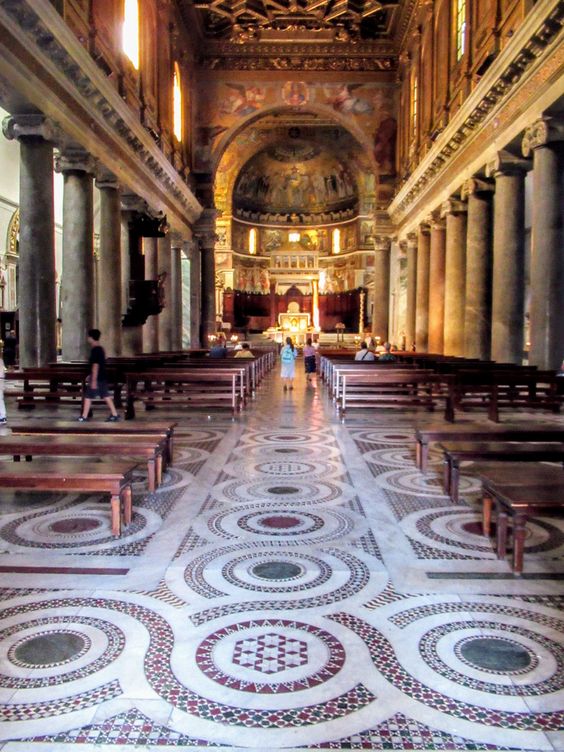 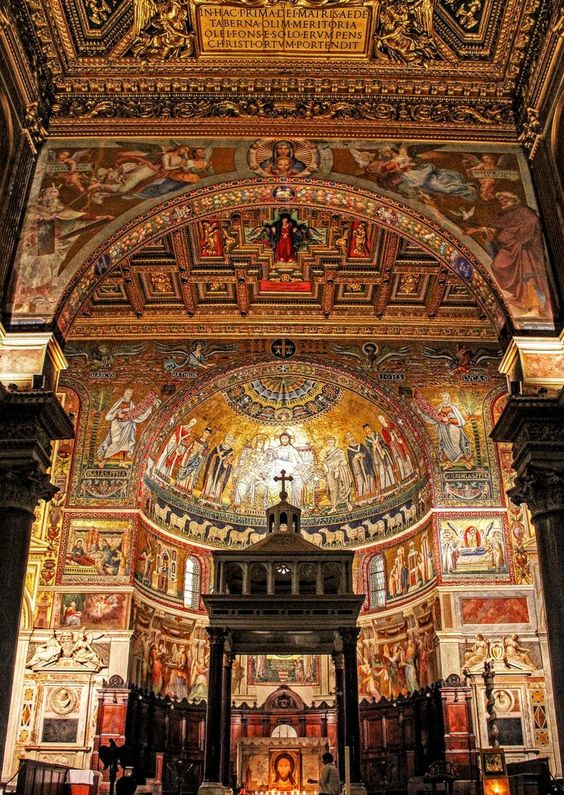 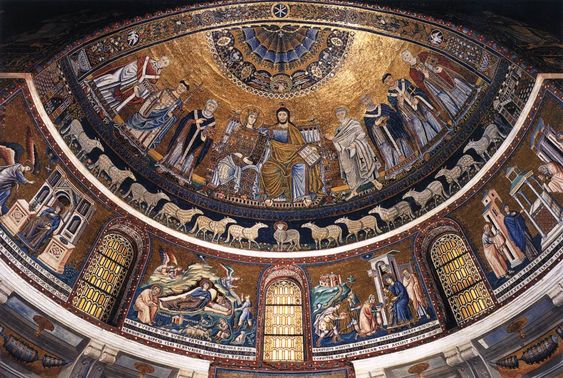 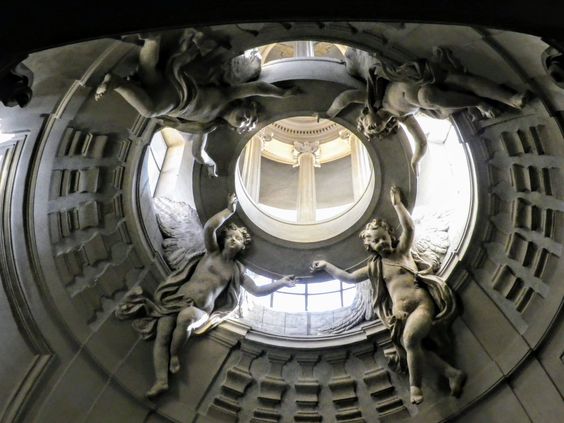 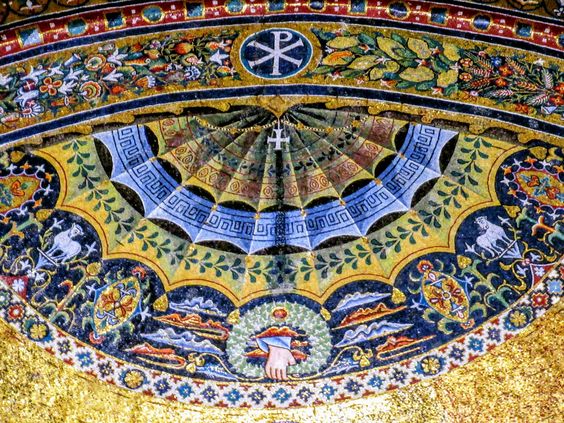 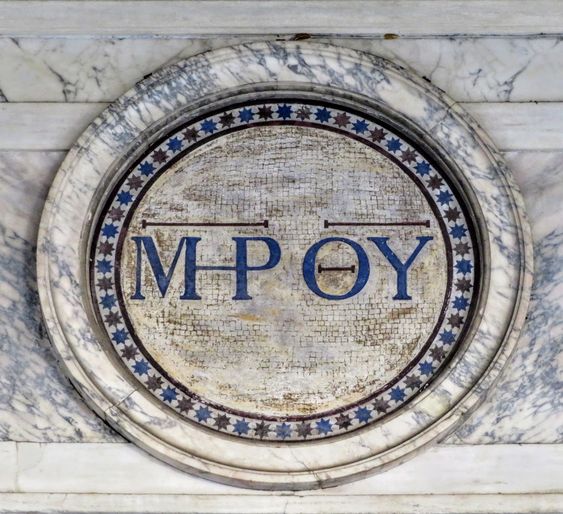 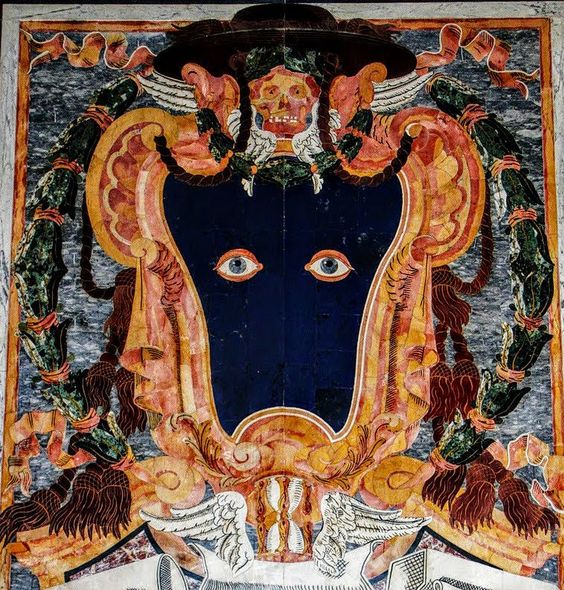 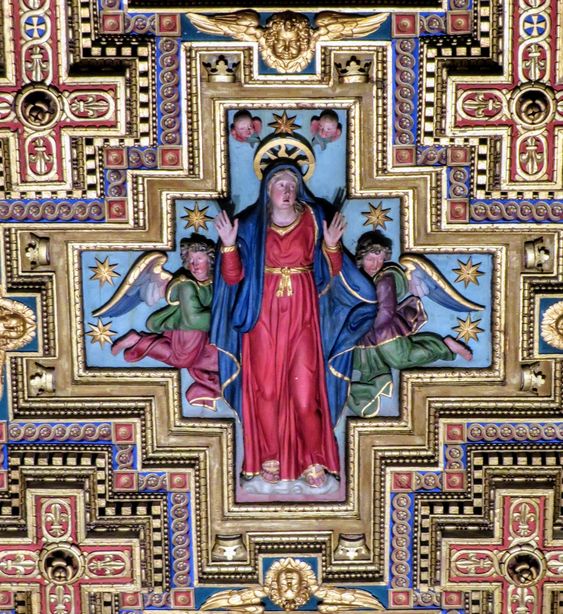 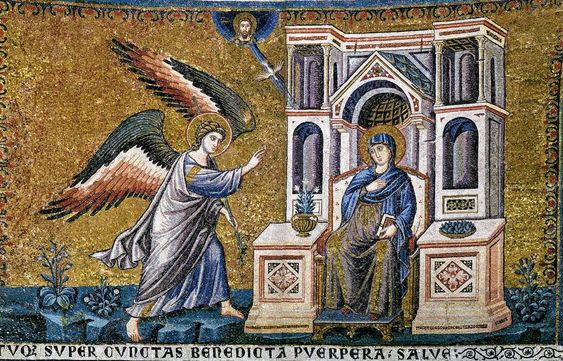 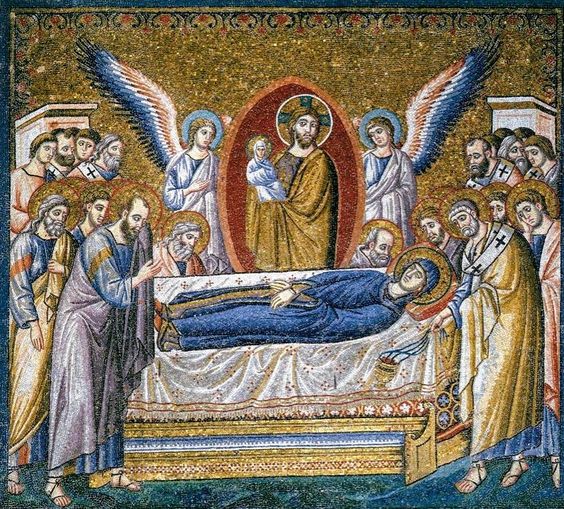 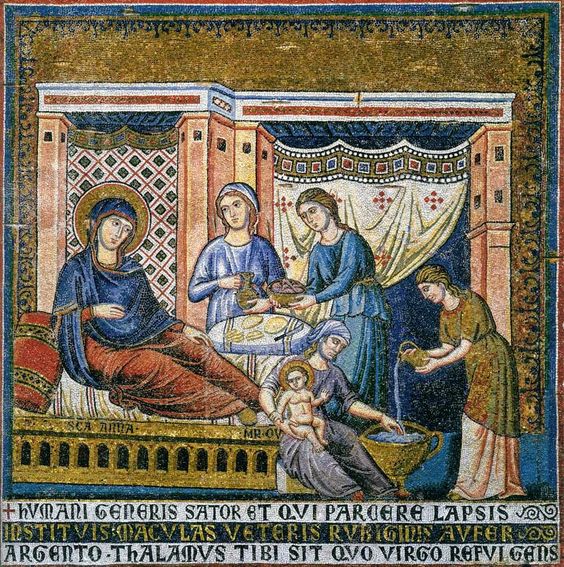 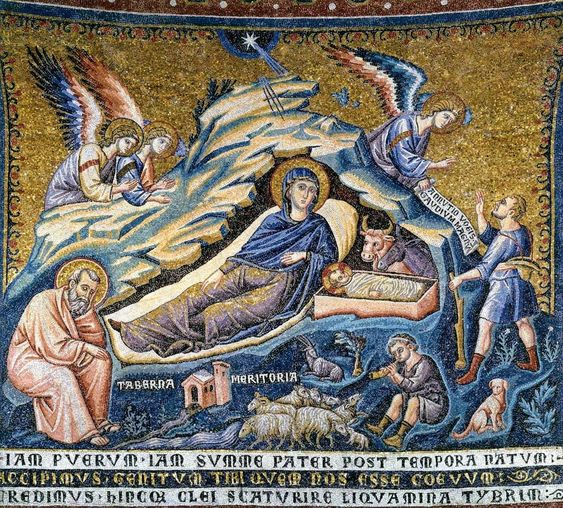 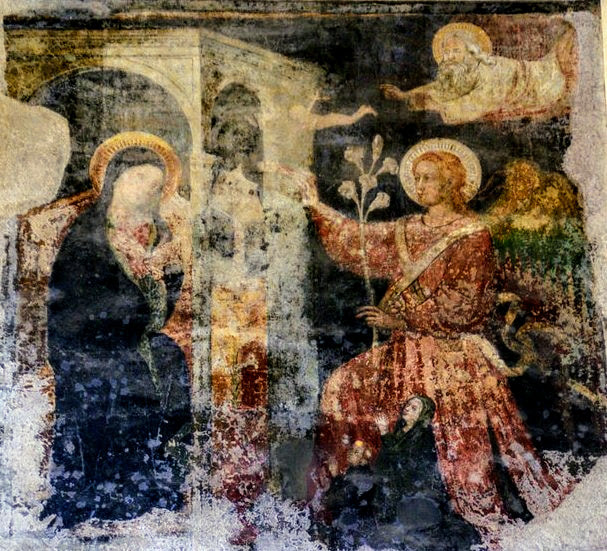 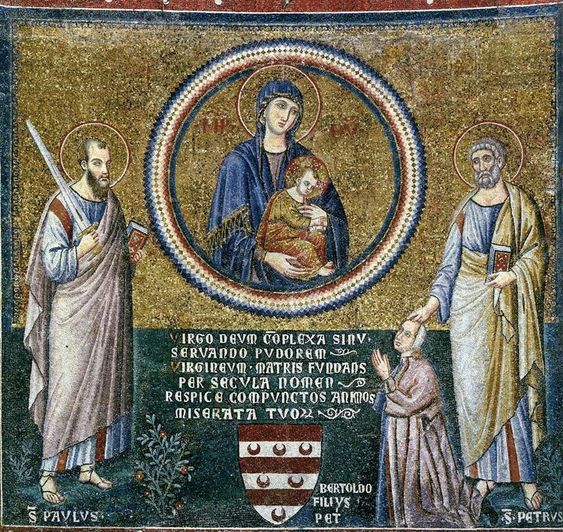 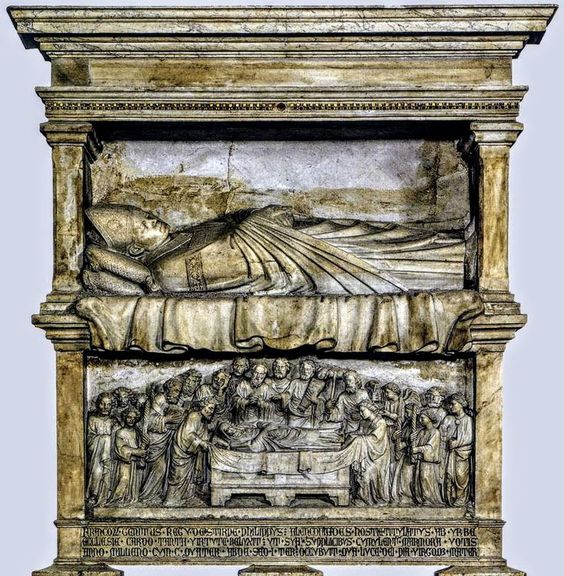 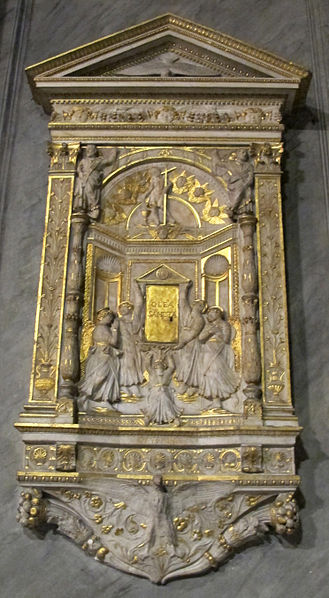