“Without having seen the Sistine Chapel one can form
no appreciable idea of what one man is capable of achieving." ​
Johann Wolfgang von Goethe 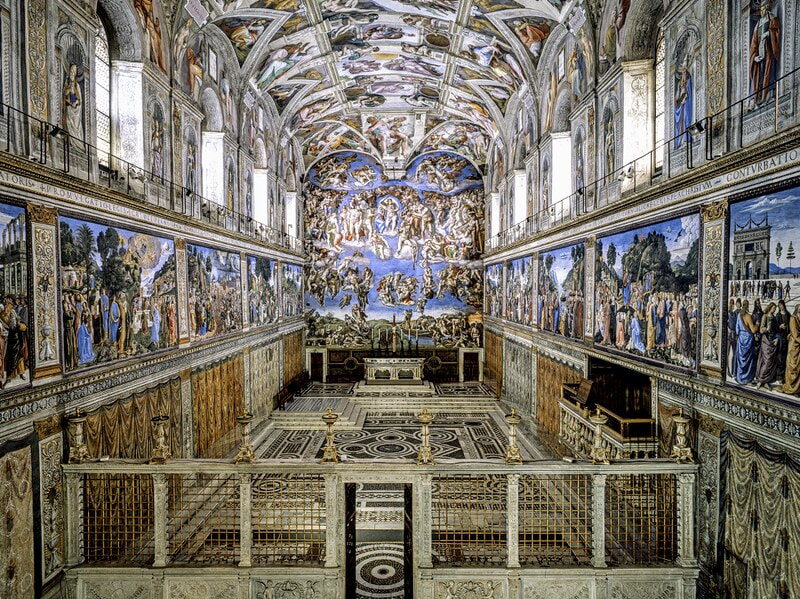 The Sistine Chapel
The Sistine Chapel (Cappella Sistina) was built at the end of the 1470s by Pope Sixtus IV (r. 1471-84) and served as a place of worship for the Cappella Papalis (Papal Chapel), a body which was made up of the pope and a large number of senior ecclesiastical and secular officials. The chapel, which is 40 meters (130 feet) long, 13 meters (42 feet) wide and 20 meters (65 feet) high, is thought to have been designed by the Florentine architect, Baccio Pontelli. It is a full-scale copy of the inner sanctum of the Temple of Jerusalem, which was completed by King Solomon in 930 B.C.E.

When it came to decorating the chapel Pope Sixtus IV turned again to Florence. Three (Sandro Botticelli, Domenico Ghirlandaio, Cosimo Rosselli) of the four artists who were selected, were Florentine by birth, while the fourth (Pietro Perugino) was Florentine by adoption. The group was commissioned to paint scenes illustrating the life of Moses on the south wall and scenes from the life of Christ on the north wall.

The artists began work in October, 1481. All four walls of the chapel were divided by fictive architectural elements into three horizontal tiers. At the lowest tier the walls were painted with fictive curtains, emblazoned with the coat of arms (an oak tree) of Pope Sixtus IV. The middle, and most important, tier was divided up into sixteen ‘panels’, each 20 feet long by 12 feet high, which corresponded to the bays beneath the windows. Here we find the two cycles of stories from the Old and New Testaments. The top tier contains depictions of the earliest popes, who stand in painted niches.

We do not know how the artists apportioned the work, but we do know that it was not divided equally. Ghirlandaio, for example, only painted two of the major scenes, while Perugino painted five. Whenever artists were involved in a collective project, one assumes that an overall artistic concept had been worked out in advance. Each artist would have to adjust his manner of working, technique and even style to the agreed standard. This was most certainly the case in the Sistine Chapel. Throughout the two cycles, the sizes of the principal figures are fairly consistent, landscape backgrounds fill roughly the same amount of space, the horizon is at the same height and architectural features are done roughly to the same scale. For instance, in all six frescoes on the north wall, Christ is recognisable through the clothes he wears, a red tunic and a blue cloak. In the case of Moses, who always wears a yellow tunic and an olive green cloak, the artists took equal care to create a definite and recognisable figure. Moses’ advancing age is also depicted, as we progress from one fresco to the next.

By the time the four artists started work in the chapel, the ceiling would already have been painted. The man responsible for this task was Piermatteo d’Amelia, who painted a vision of the heavens with gold stars glistening against a blue background.

The two cycles represent the history of salvation by placing episodes from the Old Testament opposite those from the New Testament and drawing complex analogies between them. Each fresco is thus the prefiguration or fulfilment of the one opposite. The Latin inscriptions, which surmount the frescoes, were composed by Andreas Trapezuntius, secretary to Pope Sixtus IV. The frescoes illustrating scenes from the life of Christ were expressly painted on the north wall so that they would receive the maximum amount of daylight. The fact that such scenes are better lit indicates their greater theological importance in the eyes of the Catholic Church. The pope’s throne also stood against the south wall, under the frescoes of the Old Testament and facing those of the New.

Both cycles would have begun on the altar wall with paintings depicting scenes from the early lives of Christ and Moses. However, these two frescoes, which were the work of Perugino, were destroyed in 1536 when Michelangelo came to paint the Last Judgement. All four painters made use of a technique known as continuous narration, in which two or more events (separated by time and/or space) are depicted within a single painting. Continuous narration had originally been developed by Ghiberti and Masaccio in the first quarter of the 15th century. By the time it came to be used in the Sistine Chapel, it was an old-fashioned technique. But it was the only way to depict the many events, which the complex programme required.