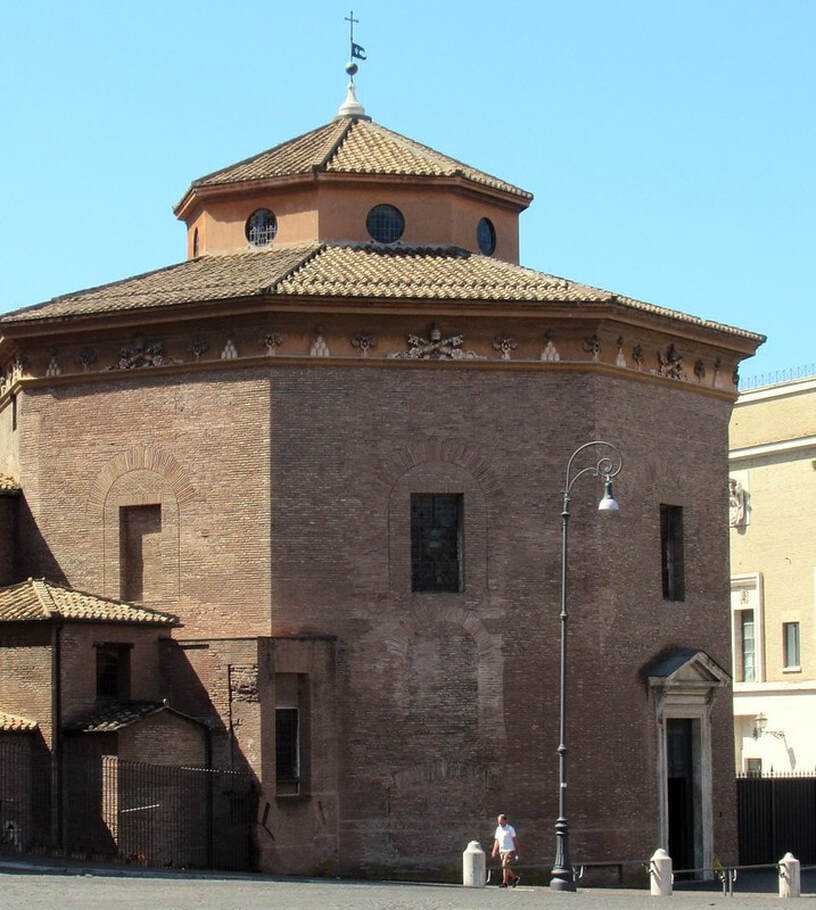 Lateran Baptistery
The Lateran Baptistery (San Giovanni in Fonte al Laterano) was built in the early 4th century. Its octagonal design was copied in numerous baptisteries throughout the world; in the Bible the number eight represents a new beginning 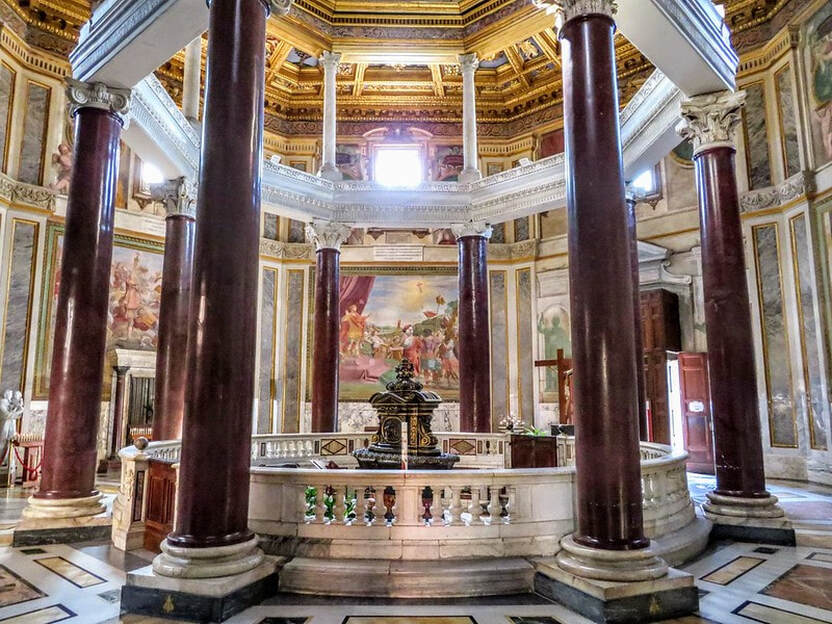 Lateran Baptistery
​The eight porphyry columns in the interior were erected by Pope Sixtus III (r. 432-40). They support an architrave, which, in turn, supports eight smaller marble columns. 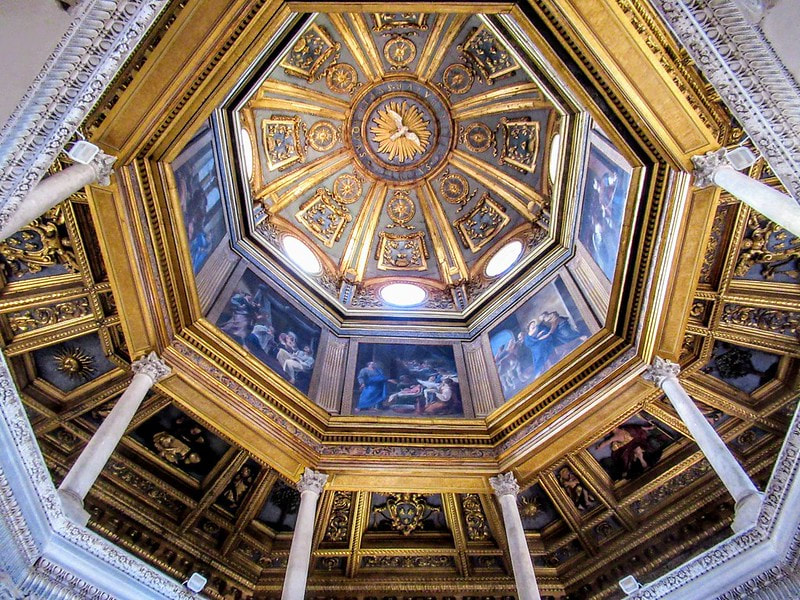 Vault
Four of the sections of the beautiful gilded and painted wooden ceiling sport the coat of arms of Pope Urban VIII (r. 1623-44). The other four sections depict St John the Evangelist, Christ in Majesty, St John the Baptist and the Assumption of the Virgin Mary. In the corners are images of the sun (Urban VIII's personal device) and an oak tree, above which hover the heraldic bees of the Barberini family, to which the pope belonged.

The drum of the dome has eight frescoes by Andrea Sacchi (1599-1661), which illustrate events in the life of St John the Baptist. In the centre of the vault is the Dove of the Holy Spirit in glory. It is surrounded by a quotation from the Book of Genesis (1:2): SPIRITVS DEI FEREBATVR SVPER AQVAS (The spirit of God moved upon the face of the waters). 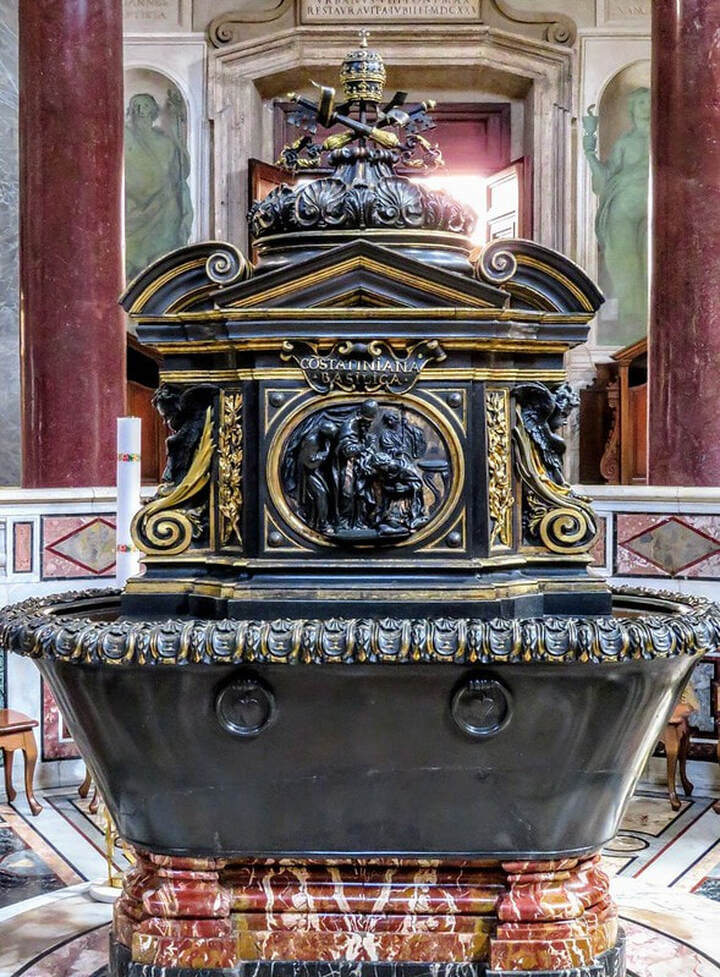 Font
In the centre is the font, an ancient basalt bath-tub. It stands in a circular depression, a reminder of the original baptismal plunge-pool.

​The eight wall frescoes date mostly from the 17th century. 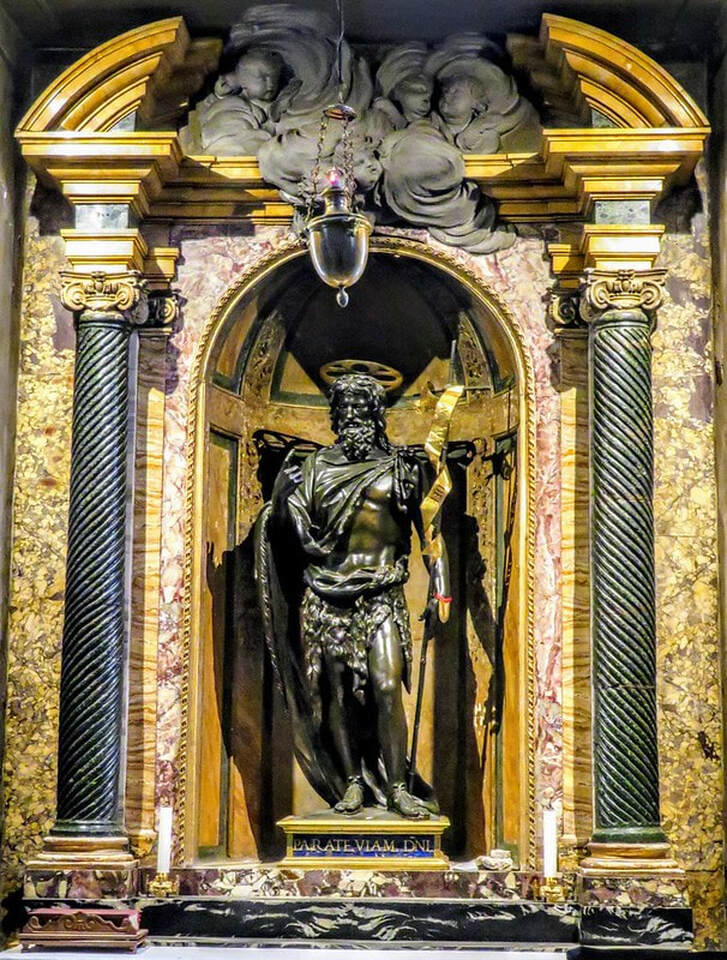 Statue of St John the Baptist by Luigi Valadier
The two little 5th century side chapels have very similar entrances. Each has a pair of porphyry Corinthian columns supporting a horizontal entablature in grey-veined marble.

The interior of the Chapel of St John the Baptist (right) was entirely remodelled by Giovanni Battista Ceccarelli in 1780. The bronze statue of St John the Baptist is by the Roman goldsmith Luigi Valadier (1726-85). Above the entrance are two inscriptions: ERVNT ASPERA IN VIAS PLANAS (The rough places will become level ways) and HILARVS EPISCOPVS PLEBEI DEI (Bishop Hilary to the people of God), Luke 3:5. The doors to the chapel, which date back to the 5th century, bear the inscription: IN HONOREM BEATI IOHANNIS BAPTISTAE HILARVS EPISCOPVS CHRIST FAMVLVS OFFERT (Bishop Hilary, the servant of Christ, offers in honour of John the Baptist). The doors were once famous for the musical sound they made when moved. Unfortunately, this stopped after the Mafia detonated a bomb outside the baptistery on July 27th, 1993.

The Chapel of St John the Evangelist (left) was built by Pope St Hilary (r. 461–468), and the dedicatory inscription can still be seen on the entablature above the door. It reads: LIBERATORI SVO BEATO IOHANNI EVANGELISTE HILARVS EPISCOPVS FAMVLVS CHRISTI (To his liberator, blessed John the Evangelist, Hilary the bishop, slave of Christ). Below this is a later inscription: DILIGITE ALTERVTRVM (Love one another). The bronze doors (1196) were made by Uberto and Pietro of Piacenza.
​
The Cappella di San Venanzio (Chapel of St Venantius), which is accessed by a short passage, was added by Pope John IV (r. 640-42) .