During the course of the 19th and well into the 20th century, a number of major European and American writers lived and worked (for longer or shorter periods) in Florence. Sometimes the buildings in which they resided are graced with a plaque, but more often than not the walls are silent.
Henry James
Henry James (1843-1916) first arrived in Florence 1869 and stayed at the Hotel de l’Europe in Piazza Santa Trinita. He spent three weeks ‘communicating with the immortals’. He returned to Florence in 1872 and rented an apartment in Piazza Santa Maria Novella, on the corner with Via della Scala, to which he returned in 1874. It was while he was living there that he wrote his first novel Roderick Hudson. Between 1886 and 1887, James lived mostly at the Villa Brichieri in Bellosguardo, where he wrote most of the novella The Aspern Papers. The apartment belonged to a compatriot and fellow writer, Constance Fenimore Woolson (1840-94).

E. M. Forster
In 1901, E. M. Forster (1879-1970) arrived in Florence with his indomitable mother. They first stayed at the Hotel Bonciani in Via de’ Panzani before moving to the Pensione Simi (Lungarno delle Grazie, 2), the model for Pension Bertolini in his novel A Room With a View. The Pensione Simi is now the Hotel Jennings-Riccioli.

D. H. Lawrence
D. H. Lawrence (1885-1930) first visited Florence in 1919, staying at the Pensione Balestra (Piazza Mentana, 5), which was described in his novel Aaron’s Rod as Pension Nardini. It is now the Hotel Balestra. In 1922 Lawrence stayed at via de’ Bardi, 32, the house in which, according to tradition, Eliot’s Romola lived. Between 1926 and 1927, Lawrence and his wife Frieda lived in Villa Merenda in Scandicci, a suburb of Florence. It was there that he penned his controversial novel Lady Chatterley's Lover.

George Eliot
George Eliot (1819-80) first visited Florence in 1860 with her consort, G.H. Lewes. They stayed at the Pensione Suisse (Via Tornabuoni, 13), which is today marked by a plaque. She wrote: ‘We are at the quietest hotel in Florence, having sought it out for the sake of getting clear of the stream of English and Americans, in which one finds oneself in all the main tracks of travel…..’ In May 1861, the couple returned and took up residence at the Hotel della Vittoria (Lungarno Amerigo Vespucci, 10), which had an English landlady, according to Baedeker.

Elizabeth Barrett Browning
In April 1847, Elizabeth Barrett-Browning (1806-61) and Robert Browning (1812-89) arrived in Florence from Pisa. The ‘wild poets, but wise people’ first settled in via delle Belle Donne before moving to Casa Guidi in via Maggio. It was in Casa Guidi that their only child Robert Wiedeman Barrett Browning, known as Pen, was born on March 9th 1849, and where Elizabeth died on June 29th 1861. E.B.B. is buried in the 'English' Cemetery in Florence.

Fyodor Dostoevsky
On his first visit to Florence, in 1861, Fyodor Dostoevsky (1821-81) stayed in the Pension Suisse, a year later than George Eliot. In 1868, he returned to the Pension, but soon moved across the river to Via Guicciardini, 22, which is marked by a plaque. It was there that he completed his novel The Idiot. Dostoevsky wrote of Florence: ‘When the sun shines it is almost Paradise. Impossible to imagine anything more beautiful than this sky, this air, this light.’

​Percy Bysshe Shelley
Percy Bysshe Shelley (1792-1822) and his wife Mary Wollstonecraft (1797-1851) arrived in Florence in September, 1819. They found lodgings at the boarding house of Mme. Merveilleux du Plantis in the Palazzo Marini on Via Valfonda. Two months later Mary Shelley gave birth to a boy, whom they named Percy Florence Shelley (1819-89). Shelley was surprised by the severity of the winter: ‘Tuscany is delightful eight months of the year. But nothing reconciles me to …such infernal cold as my nerves have been racked upon for the last ten days’. The poet went on to describe Italy as ‘the paradise of exiles, the retreat of pariahs’. Palazzo Marini has gone, but a plaque on the spot where it stood notes that it was while he was staying there that Shelley wrote the poem Ode to the West Wind.

Nathaniel Hawthorne
In the spring of 1858 Nathaniel Hawthorne (1800-60) and his family arrived in Florence from Rome. They found accommodation in the Casa del Bello (Via dei Serragli, 36). In the summer they moved up to Villa Montauto in Bellosguardo. The villa was the inspiration for Monti Beni in the novel The Marble Faun, which he began writing while staying there. Hawthorne rented the Villa Montauto for 28 dollars a month (those were the days!). He wrote that the place was 'big enough to quarter a regiment'.

Aldous Huxley
Aldous Huxley (1894-1963), his wife Maria Nys, and their young son Matthew, arrived in Florence in March 1921. They stayed in the wing of the Villa Minucci (Via Santa Margherita a Montici, 4). Huxley started writing his novel Antic Hay while living in the villa.

Henry Wadsworth Longfellow
In 1828, Henry Wadsworth Longfellow (1807-82), the poet and first American translator of Dante’s The Divine Comedy, lived for a period in Piazza Santa Maria Novella. The piazza was sometimes called Piazza degli Stranieri, on account of the number of foreigners (stranieri) who lived there. There is a plaque in memory of his stay on the Grand Hotel Minerva.

​Mark Twain
In 1892, the American writer Samuel Langhorne Clemens (1835-1910), better known by his pen name Mark Twain, and his family rented Villa Viviani in Settignano. While he was living there he wrote Pudd'nhead Wilson. In 1903 Clemens returned to Florence with his ailing wife Olivia, and their daughters Clara and Jean, and rented Villa di Quarto (a short distance to the north of the city). The owner of the villa was Countess Massiglia, whom the writer would later describe as the 'lowest-down woman on the planet. In June of the following year Olivia Clemens died at the villa and Clemens returned to the United States. He never returned to Italy.

Dylan Thomas
In the summer of 1947, the Welsh poet Dylan Thomas (1914-53) stayed at Villa del Becaro, in Scandicci. Thomas found Florence 'a gruelling museum'. He took relief from the suffocating summer heat by quaffing lots of bottles of cold beer, which he described as 'bottled God'. 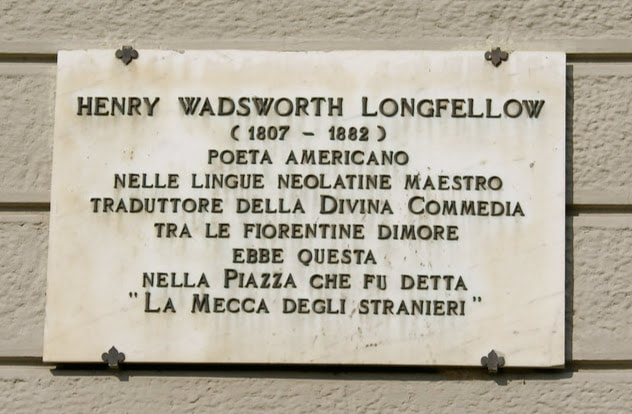