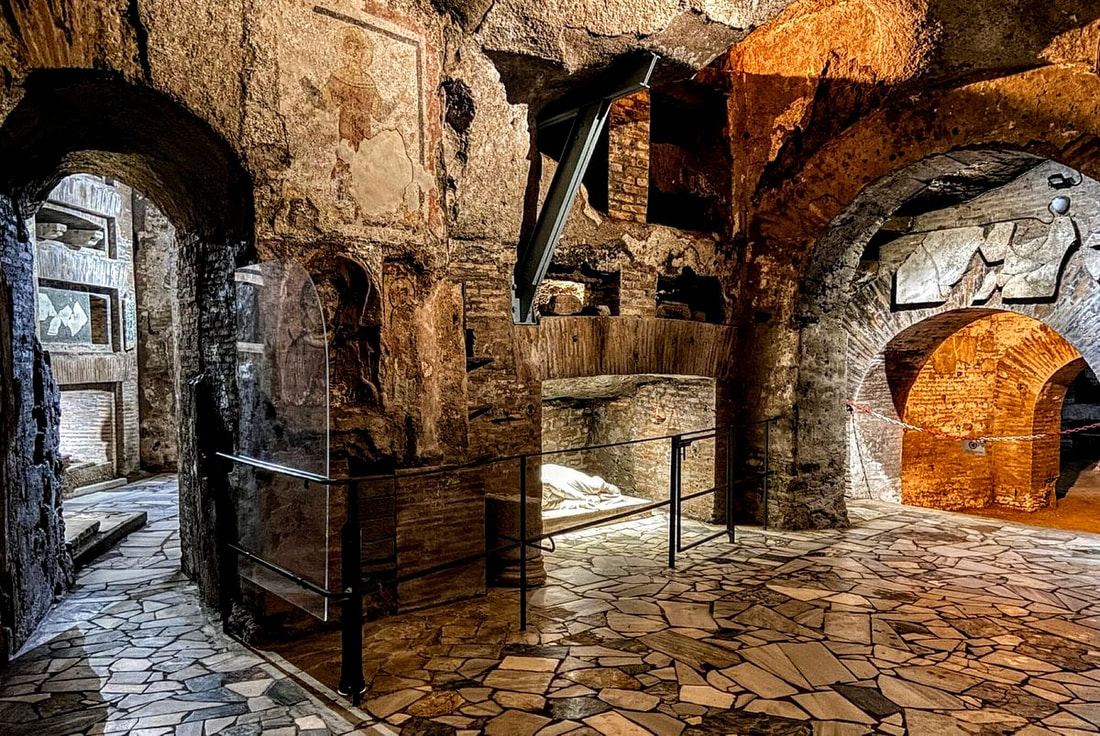 The catacombs of St Callixtus, which date back to the first half of the 2nd century, are some of the most famous in Rome.
​
Originally there were five separate places of burial, but in time they became one vast catacomb, extending over an area of almost 20 km on four different levels, ranging from 3 to 30 metres in depth and including approximately half a million tombs!

How did so many miles of galleries come to be executed, and thousands of Christians buried, during the age of persecutions, which lasted on and off from the reign of Nero until the advent of the emperor Constantine? The reason why the catacombs were not profaned or closed can be found at the heart of one of the oldest of Roman laws, which made any tomb or place of burial sacrosanct. The ancient Romans held everything to do with burial with the greatest of awe.

And why did the Christians choose to be buried in underground galleries? It is more than likely they did this so that they could accommodate many more graves. In addition, Rome’s demographic surge and a gradual change in funeral rites from cremation to inhumation, meant that land was becoming both scarce and expensive. When Constantine legalised Christianity, in 313, Christians continued to be buried in the catacombs out of devotion to the martyrs.

Individual bodies were placed into niches known as loculi, which were hollowed into the walls. The bodies were not placed in coffins, but merely wrapped between two shrouds, which were coated with lime, and laid in the loculi. The niche was then sealed with a slab of stone.
​
Family burial chambers, cubicoli, opened off the maze of tunnels. These have larger arched graves, arcosolia, for several members and are often decorated with frescoes or inscriptions. At several points there are ancient shafts, lucernari, which allow light and air into the tunnels. Tiles and marble slabs are plastered along the walls, some with simple names and dates. These originally covered the tombs, which were tightly sealed with cement and mortar. Small round slots between the graves were for oil lamps.

Over the centuries the catacombs, apart from those of St Sebastian, were completely forgotten about, apart from one or two isolated discoveries in the 15th and 16th centuries. In 1849 a young archaeologist named Giovanni Battista de Rossi tripped over a broken slab of marble in a vineyard on the Appian Way. There was a fragment of an inscription ‘NELIUS MARTYR’ and he concluded that it referred to Pope Cornelius, who was known to have been martyred and buried in a catacomb nearby.
​
In 1854, De Rossi found the tombs of some of the early popes, which gave the catacombs a greater importance than any other. In the Crypt of the Popes we can see the tombstones of 5 popes. Next to the crypt is the tomb of Saint Cecilia, which was found in the 9th century. Throughout time the cult of this saint has rivalled that of St Agnes. Her death probably took place during the reign of Diocletian in 303. Her relics were taken from the catacombs and placed under the high altar of her church in Trastevere. During Clement VIII’s reign, the sarcophagus was opened and she was found to have survived perfectly intact, her body swathed in golden robes. The sculptor, Stefano Maderno, then made the famous statue of the saint, a copy of which can be seen in the catacombs.

The catacombs also contain paintings from the 3rd century, which are of great interest. Until the 3rd century the inscriptions were often in Greek and Jesus is seldom mentioned by name, but usually by his monogram or by the acronym for the Greek word for fish, ichthus, or simply by an image of a fish. Nowhere is he shown on the cross. The most favoured representation is of him as a good shepherd, among his sheep, or bearing a lamb on his shoulders.​​