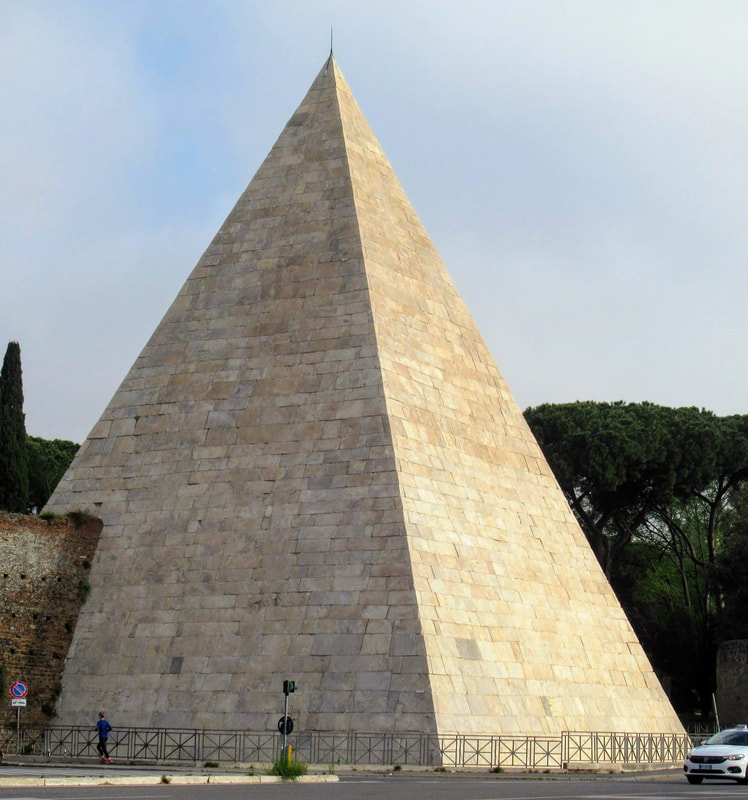 The pyramid, which is 37 metres (121 feet) high, is in an excellent state of preservation. It is made of concrete faced with slabs of marble and was erected at a fork of the Via Ostiensis and a road which ran to the river Tiber (roughly following the route of today's Via della Marmorata). An inscription was added to both the east and west faces so that it could be seen from either road. It reads: C · CESTIVS · L · F · POB · EPVLO · PR · TR · PL · VII · VIR · EPVLONVM (Gaius Cestius, son of Lucius, of the Pobilia, member of the College of Epulones, Praetor, Tribune of the Plebs, Septemvir of the Epulones).

On the east-facing side there is a second inscription, recording the circumstances of the tomb's construction. This reads: OPVS · APSOLVTVM · EX · TESTAMENTO · DIEBVS · CCCXXX ARBITRATV · PONTI · P · F · CLA · MELAE · HEREDIS · ET · POTHI · L (The work was completed, in accordance with the will, in 330 days, by the decision of the heirs Pontus Mela , son of Publius of the Claudia, and Pothus, Freedman).

Pyramids of a similar size had been built for private individuals in Upper Egypt, but in Cestius’ day they were particularly popular in Nubia (Sudan), which may suggest that he had served in the province. In the late-3rd century the pyramid was incorporated into the Aurelian walls.