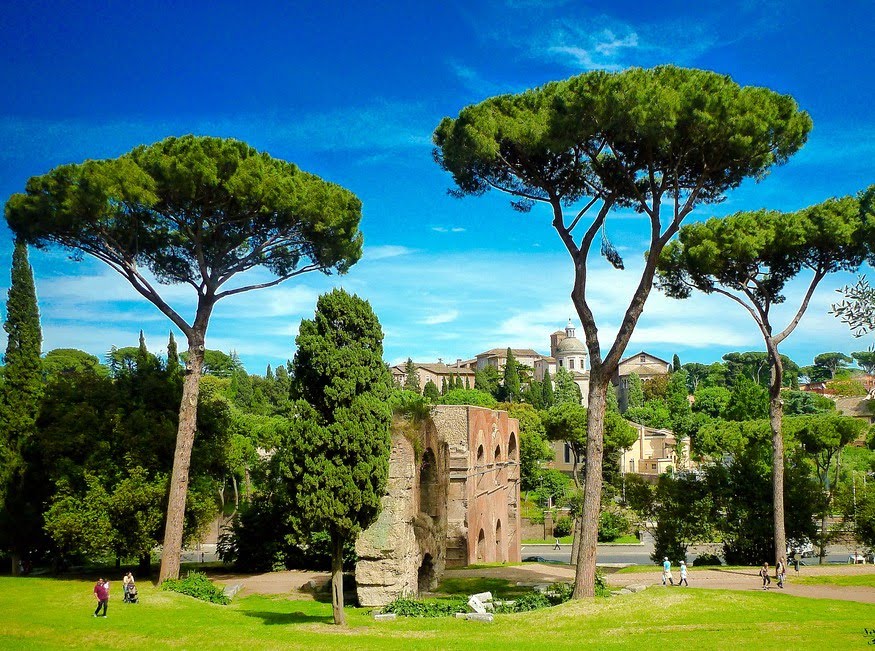 The Palatine Hill
Part garden, part archaeological site, the Palatine hill (Mons Palatinus), one of the famous seven hills of Rome, is a place charged with myth and legend. This is where, according to tradition, Romulus founded the city of Rome in 753 BCE It was the site of the Lupercal, the cave in which he and his twin brother Remus were suckled by a she-wolf, and also the hut of the shepherd Faustulus, who, with his wife Acca Larentia, brought the twins up.

During the Roman Republic, the Palatine Hill became one of the most desirable places to live and is where the English word, palace, comes from. In 36 BCE, Rome's first emperor Augustus (r. 27 BCE - 14 CE) bought a house here, albeit a modest one (part of it is open to the public). One hundred and fifty years later, the emperor Domitian (81-96), built a huge palace on the south-eastern corner, the ruins of which still stand.

The palace, which covers about six acres, was built between 81 and 92 and designed by Rabirius, one of the few Roman architects we know by name. Rabirius built to impress. The first court, for example, was once enclosed on all four sides by a portico, which comprised fluted columns of giallo antico, a marble from the Roman province of Numidia (modern-day Tunisia), fragments of which can still be seen. In the centre of the court was a huge pool, which had a large octagonal island in the middle where fountains played. Water and coloured marbles were just two of the elements that were used in great quantities in the palace; a third was the lavish use of gold. Grandeur was seen as the prerogative of the gods and in his palace Domitian was flaunting the concept of his own divinity (he frequently compared himself with Jupiter).

But when Rome went into decline so did the Palatine and by the middle of the 13th century it was made up mostly of vineyards and vegetable patches tended by small groups of monks and nuns, who had built amidst the ruins. This all changed in the 16th century when the land was parcelled up and sold to several of Rome's leading families, notably the Farnese, who transformed much of the hill into a series of terraced gardens, leading down into the Forum. It was the Farnese who built the two aviaries, which still dominate the north-eastern side of the hill.