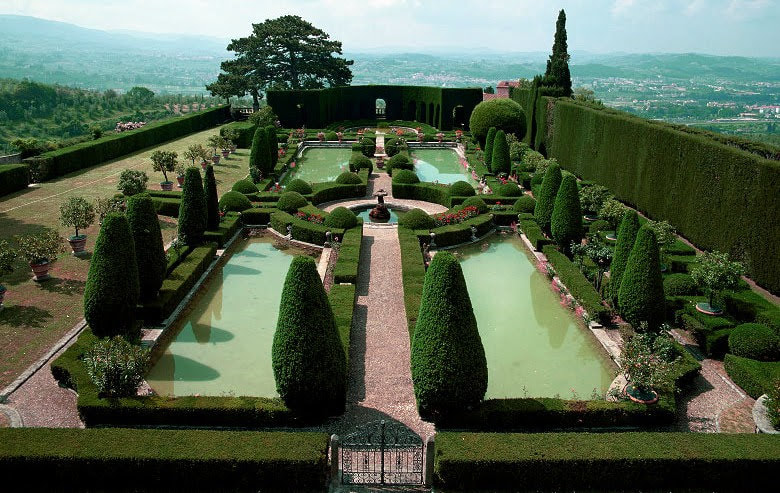 Villa Gamberaia
In the hills of Settignano, overlooking the city of Florence, stands the Villa Gamberaia, home to one of the most magical gardens in Italy.

Villa Gamberaia is first mentioned in documents of the late 14th century when a farmhouse on this site belonged to the convent of San Martino a Mensola. In the early 1400s it became the property of Matteo di Domenico, who adopted the name Gambarelli. Two of his sons were the sculptors, Bernardo and Antonio Rossellino. The name of the family and the villa probably derive from the crayfish (gamberi), which were farmed in freshwater pools in the surrounding area.

At the beginning of the 17th century, circa 1610, Zanobi di Andrea Lapi, a wealthy Florentine merchant, bought the villa and began building the main house, in part on pre-existing foundations. He and his two nephews laid out the main areas of the garden. In 1717 the villa was sold to Vincenzio Maria and Piero Capponi, who embellished the garden with new elements, including the long bowling green and the elaborate French-style parterre.

The Capponi family sold the villa in 1854 and it passed through several hands before becoming the property, in 1895, of Princess Catherine Jeanne Ghyka (1864-1954), née Kesko, sister of Queen Natalie of Serbia. Romanian born, the princess was the estranged wife of Prince Eugene Ghyka.

The princess's head gardener was Martino Porcinai, who, with the help of Luigi Messeri, created the celebrated parterre d'eau in place of the older parterre de broderie. The pools were originally animated with simple jets of water and embellished with flowers and shrubs. A later owner of the villa simplified the water parterre, largely replacing the colourful flowers and shrubs with evergreen box and yew hedges.

The princess, who was a famous beauty in her youth, is said to have shut herself away when her beauty began to fade. It was rumoured that she would emerge from her villa at dawn to bathe in the pools before disappearing inside for the rest of the day. At night, heavily veiled, she would return to the garden. She lived alone apart from her companion, the American Miss Florence Blood (1866-1925).

In 1925 the Villa Gamberaia was sold to Baroness Maud Ledyard von Ketteler, who gave the garden the predominantly evergreen and architectonic character, which we still see today.