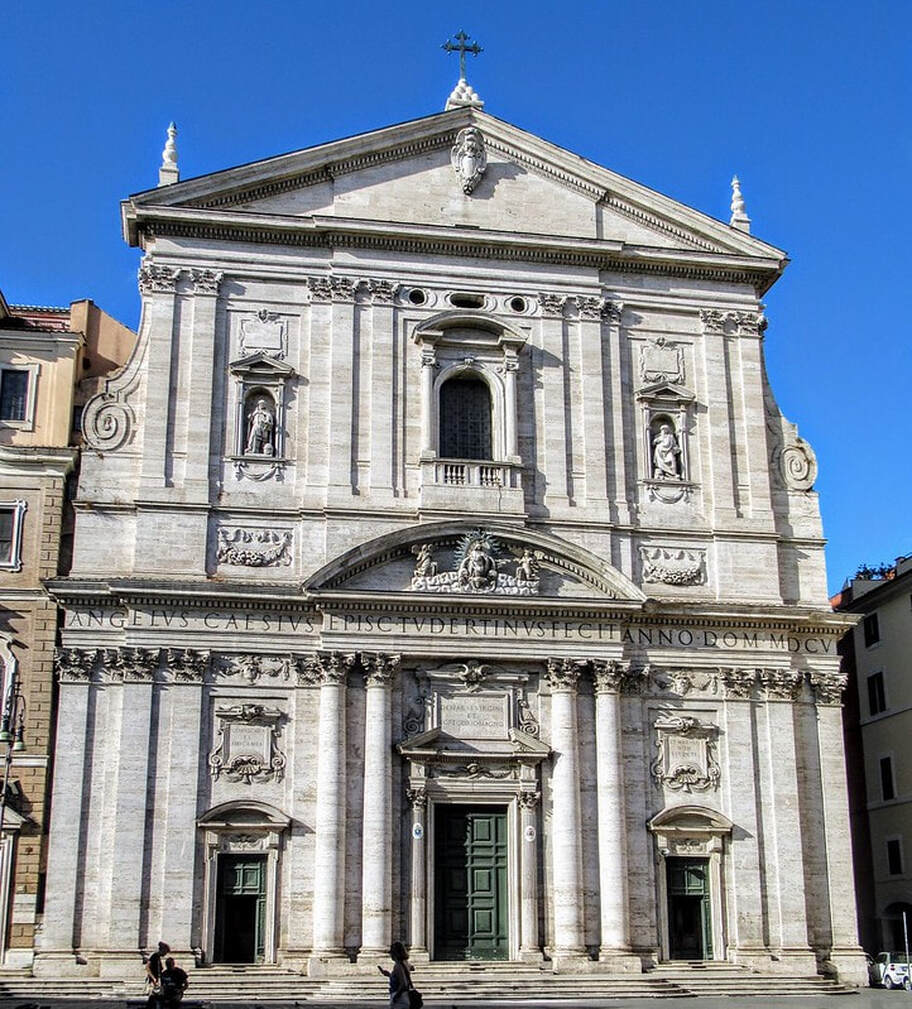 Chiesa Nuova
The 16th century church of Santa Maria in Vallicella is much better known as the Chiesa Nuova. It belongs to the Congregation of the Oratory, better known as the Oratorians, which was founded by St Philip Neri (1515-95). In 1575 Pope Gregory XIII (r. 1572-85) gave Neri the old church of Santa Maria in Vallicella, which he proceeded to rebuild.
​
The church was begun in 1575 and consecrated in 1599. Initially, the architect was Matteo di Città di Castello, but he was later replaced by Martino Longhi the Elder. The building of the Chiesa Nuova was financed by Cardinal Pier Donato Cesi. His brother Angelo paid for the facade, which was designed by Fausto Rughesi. The inscription proclaims: ANGELVS · CAESIVS · EPISC · TVDERTINVS · FECIT · ANNO · DOM · MDCV (Angelo Cesi, Bishop of Todi, made this in the year of our Lord 1605). The two statues in the upper section depict St Gregory the Great and St Jerome. They are the work of the sculptor Giovanni Antonio Paracca (1546-99), better known as il Valsoldo.

The side entrances are surmounted by ornate tablets. The two inscriptions praise the Virgin Mary with words from the Song of Songs (4:7): TOTA PVLCHRA ES AMICA MEA (Thou art all fair all fair, my love) and MACVLA NON EST IN TE (There is no stain in thee).

The handles of the inner side doors are decorated with flaming hearts, for the Cor Flammigerum is St Philip Neri's emblem. As a young man, Neri would often spend the night in prayer, in the catacombs of St Sebastian. In 1544 he was praying there on the eve of Pentecost when the Holy Spirit appeared to him in the form of a flaming globe, which descended and entered his heart. The Cor Flammigerum thus became one of the symbols of the Congregation of the Oratory. 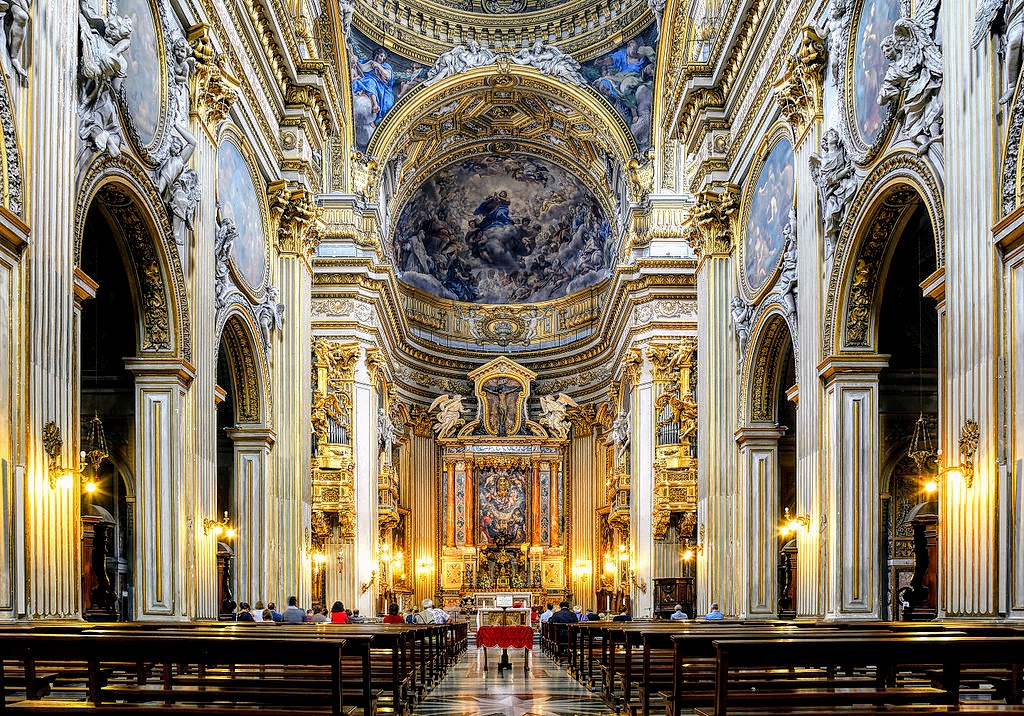 Nave vault
The fresco (1664-65) in the ceiling of the nave is by Pietro da Cortona (1596-1669). It depicts a dream in which St Philip Neri was warned by the Virgin Mary that the roof of his church was about collapse. On waking he found the roof miraculously  suspended in mid-air. Pietro da Cortona also painted the fresco of the Triumph of the Trinity in the dome and the Assumption of Mary in the apse. The striking stucco work on the nave walls was added by Tommaso Mattei between 1697 and 1701. 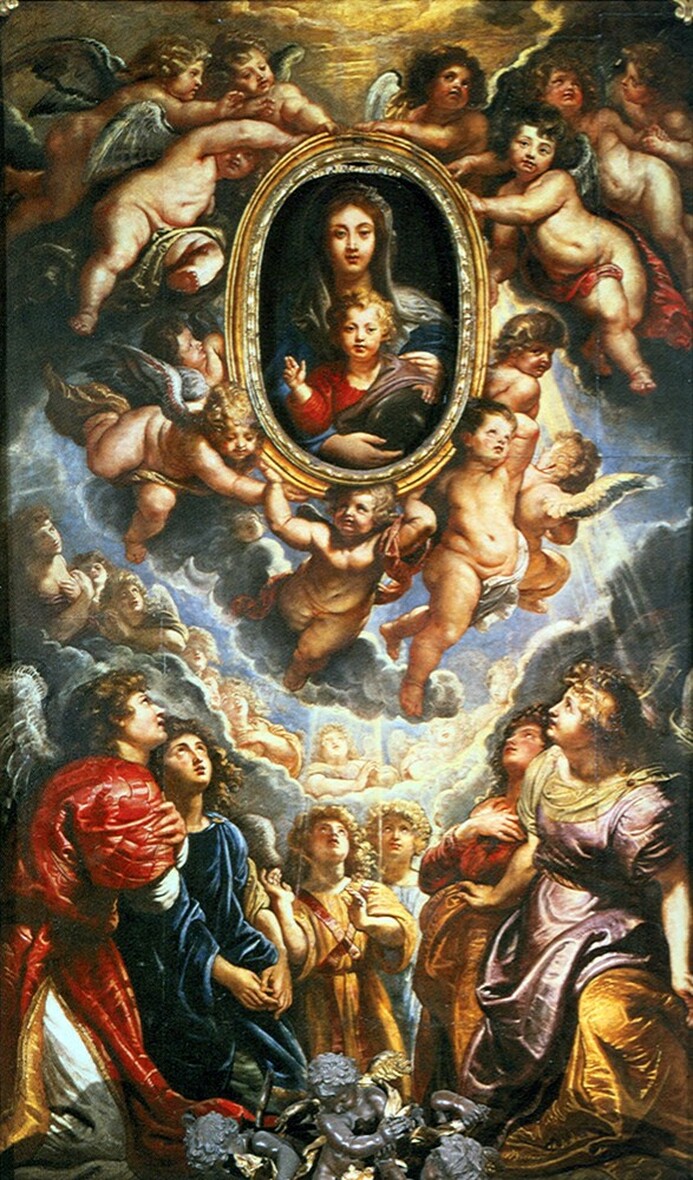 Madonna and Angels by Peter Paul Rubens
In the sanctuary are three paintings by the Flemish artist Peter Paul Rubens (1577-1640). In the painting of the Madonna and Angels (1608), which adorns the high altar, a small panel can be moved aside to reveal a much-venerated 13th century icon of Santa Maria in Vallicella. The two other paintings depict Saints Domitilla, Nereus & Achilleus and Saints Gregory, Maurus & Papianus.

The frescoes in the apse and dome are by Pietro da Cortona and depict the Glorification of the Trinity (apse) and the Assumption.

The two transept chapels have altars of similar design. In the Chapel of the Coronation (right) the statues (1594) of St John the Baptist and St John the Evangelist are by Flaminio Vacca (1538-1605); the altarpiece (1615) is by Giuseppe Cesari (1568-1640), better known as il Cavaliere d'Arpino. In the Chapel of the Presentation the statues (1592) of St Peter and St Paul are by Giovanni Antonio Paracca (1546-99), better known as il Vasoldo; the altarpiece (1603) is by Federico Barocci (1535-1612). The transepts also boast two spectacular Baroque organ cases. ​ 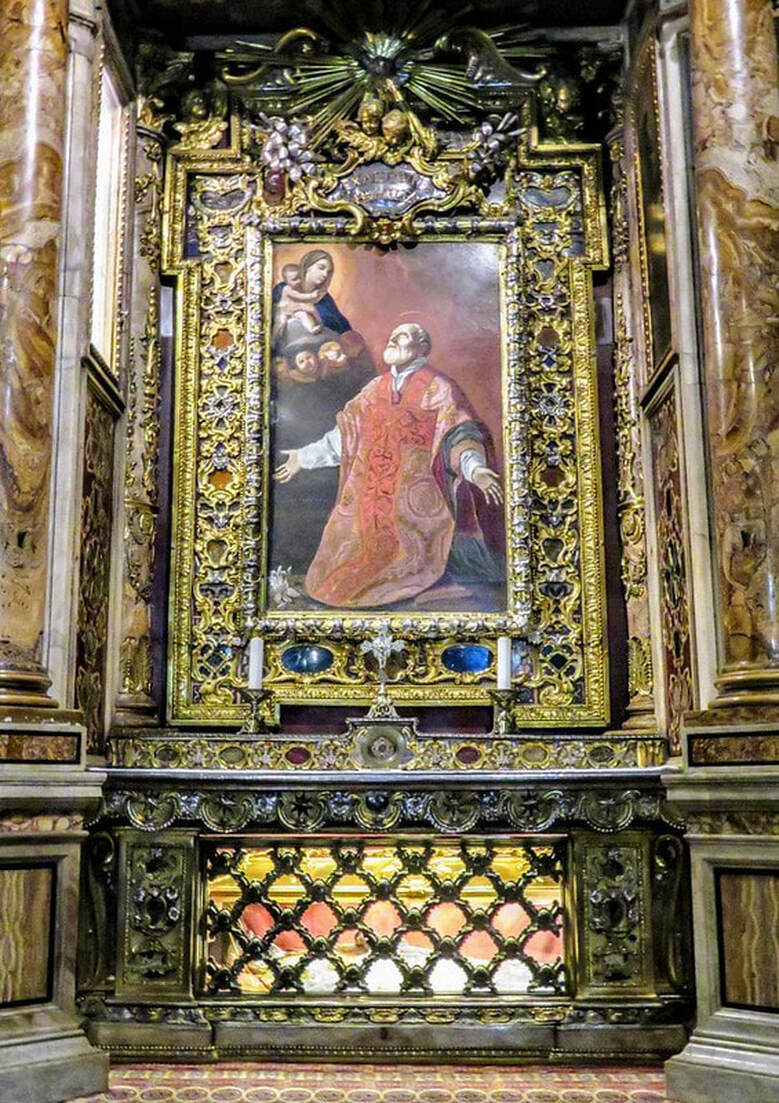 Chapel of St Philip Neri
Off the left transept stands the sumptuously decorated Chapel of St Philip Neri. Filippo Neri died, at the age of 79, on May 26th 1595. He was canonised by Pope Gregory XV (r. 1621-23) on March 12th 1622. The altarpiece is a copy in mosaic by Vincenzo Castellani of a famous painting by Guido Reni. The saint is interred beneath the altar

The Chiesa Nuova was once home to a painting of the Deposition (1604) by Caravaggio (1571-1610). However, at the end of the 18th century, the altarpiece was looted on the orders of Napoleon and sent to Paris. When the painting was returned to Rome in 1816 it was not put back where it belonged, but taken to the Vatican Museums, where it remains. The present altarpiece, second chapel to the right, is a copy of Caravaggio's Deposition by the Austrian painter Michael Köck (1760-1825).
Gallery 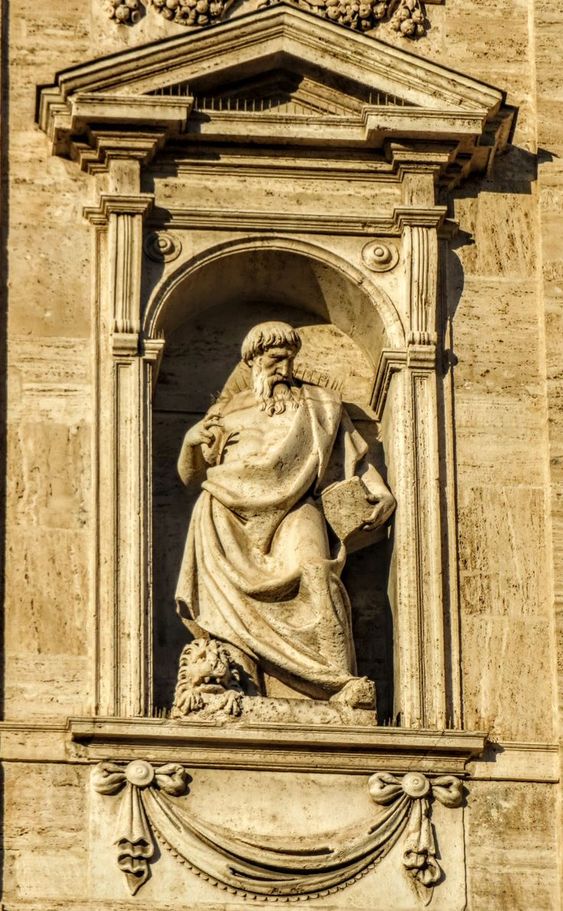 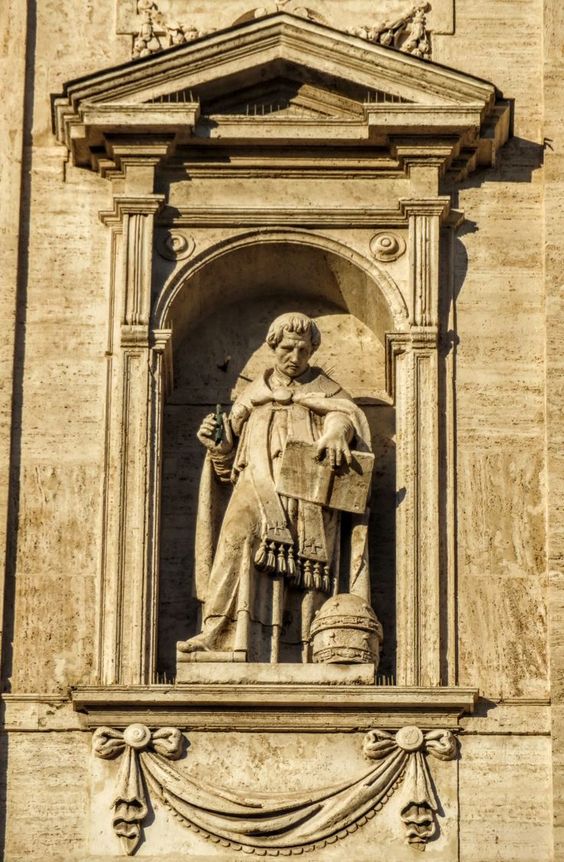 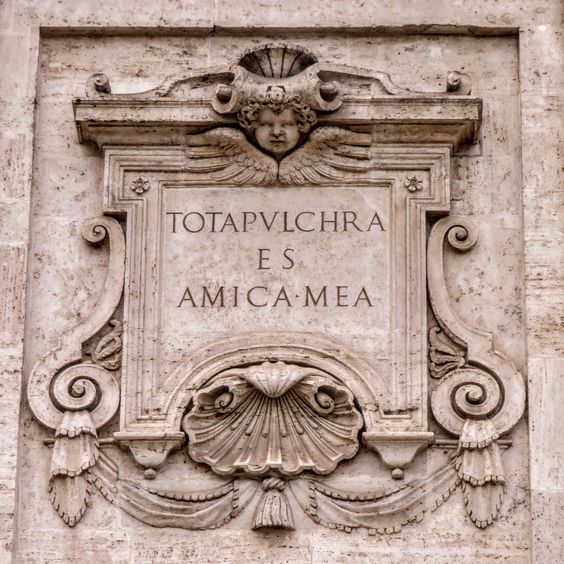 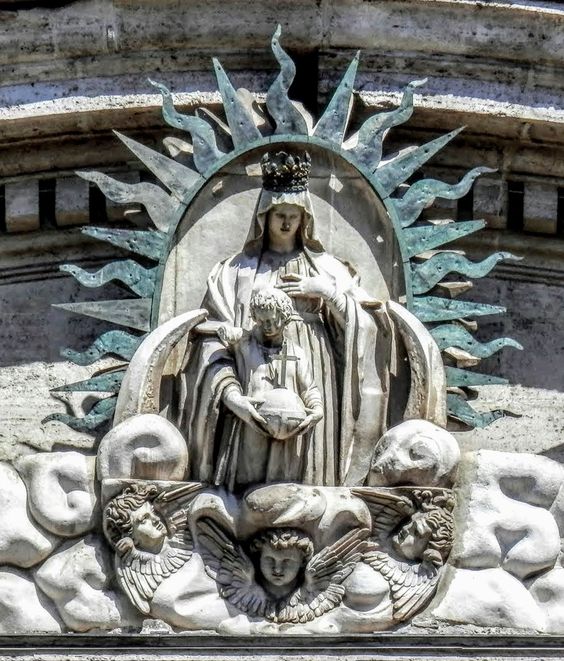 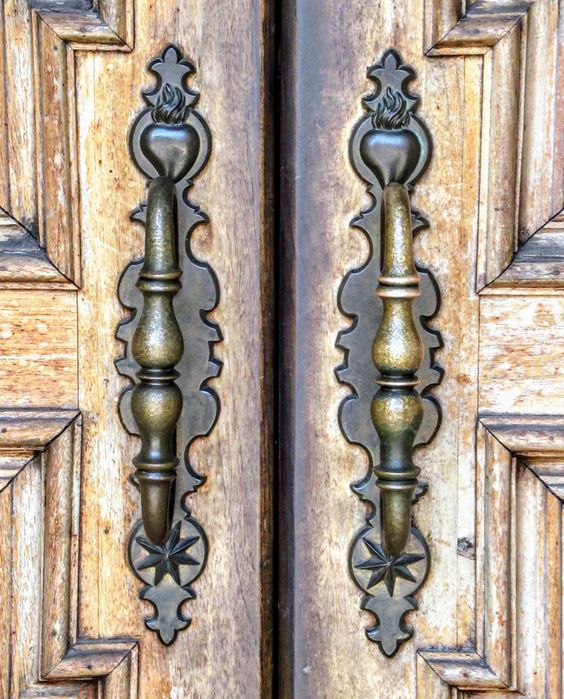 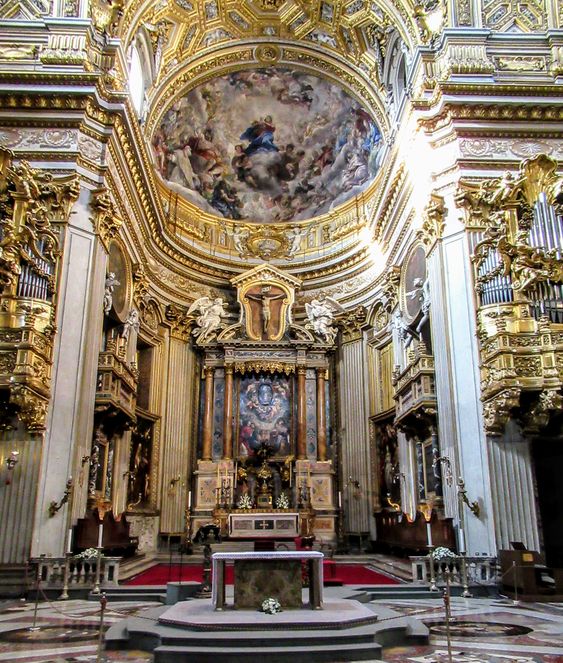 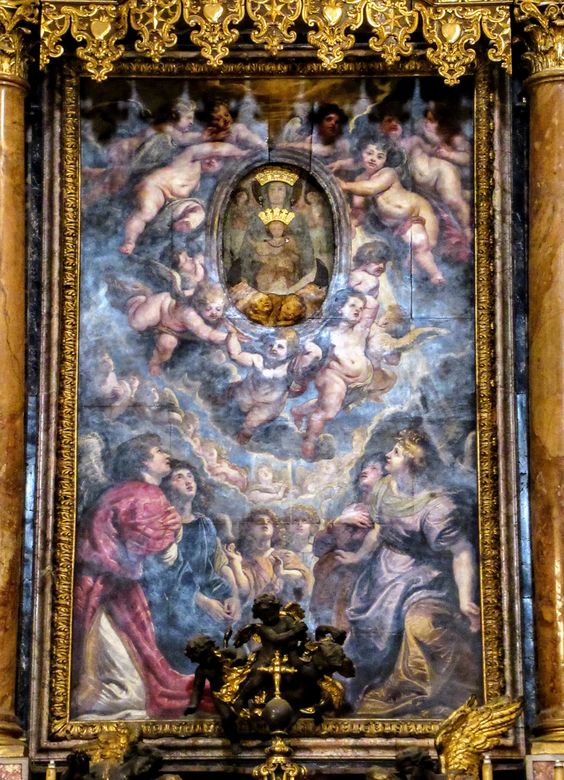 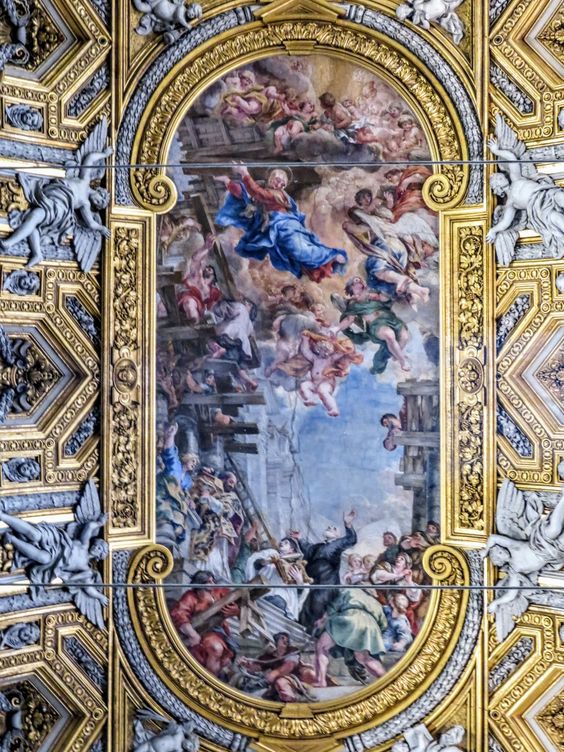 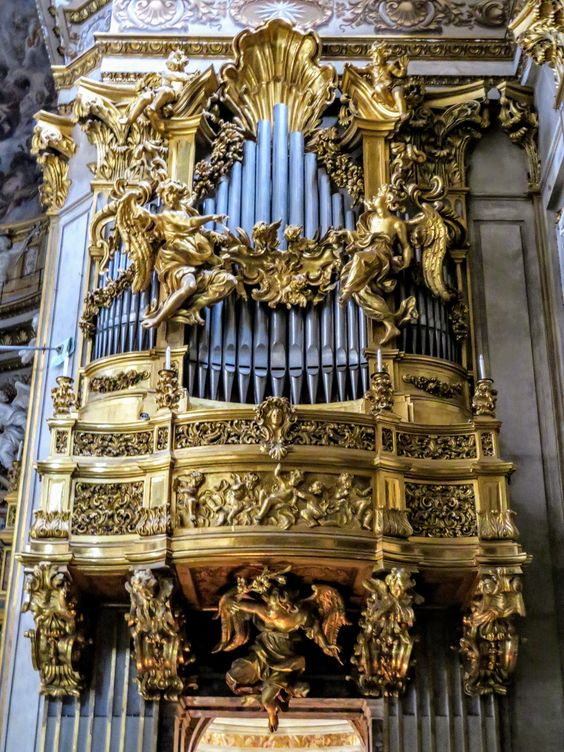 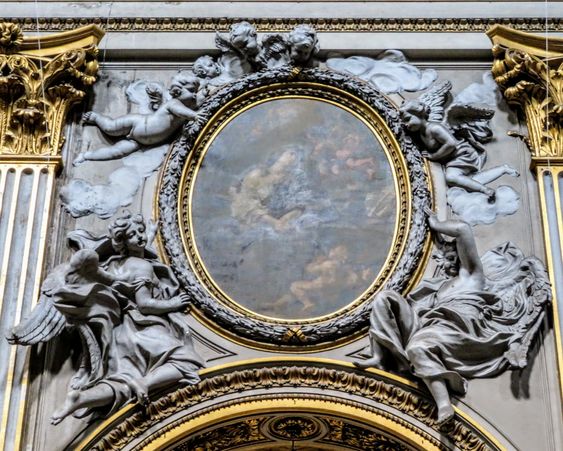