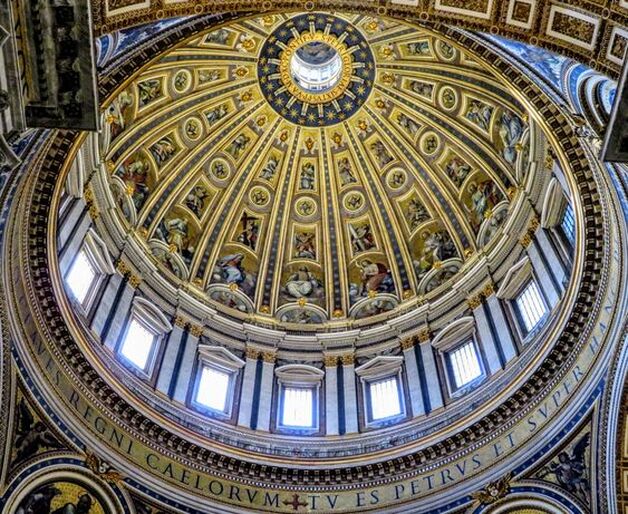 Interior of the dome
The Dome

The majestic dome, 42.34 m in diameter, was designed by Michelangelo, but mostly constructed after his death under the direction of Giacomo della Porta. It was completed in 1590.  Rising to a height of 136 m, it is the tallest dome in the world.

At the base of the lantern is a dedicatory inscription to Pope Sixtus V (r. 1585-90): S PETRI GLORIAE SIXTUS PP V A MDXC PONTIF V (For the glory of St Peter, Pope Sixtus V, 1590, fifth year of his pontficate).

The decoration of the interior of the cupola was undertaken by Giuseppe Cesari (1568-1640), better known as the Cavaliere d'Arpino and carried out with the help of a large team of assistants.

The cupola is made up of sixteen sections, each of which is divided into six parts. At the very top, and closest to God the Father (lantern ceiling), are the heads of the Seraphim. Coming down to earth, and growing in size, there is a circle of angels, the heads of the Cherubim, more angels, a series of images of Christ, the Virgin Mary, St John the Baptist, St Paul and the twelve Apostles, while in the lunettes at the base of the cupola are half-length images of bishops and patriarchs.
Ringing the base of the cupola, in letters almost 2 m high, is the Latin inscription: 'TV ES PETRVS ET SVPER HANC PETRAM AEDIFICABO ECCLESIAM MEAM ET TIBI DABO CLAVES REGNI CAELORUM' ('Thou art Peter, and upon this rock I will build my church. And I will give unto thee the keys of the kingdom of heaven' Matthew 16:18-19, KJV).

The four huge pendentives are decorated with images of the four Evangelists. Under the roundels runs the Latin inscription: 'HINC VNA FIDES MUNDO REFULGET HINC SACERDOTI UNITAS EXORITVR' ('Hence a single faith shines throughout the world. Hence arises the unity of the Priesthood').