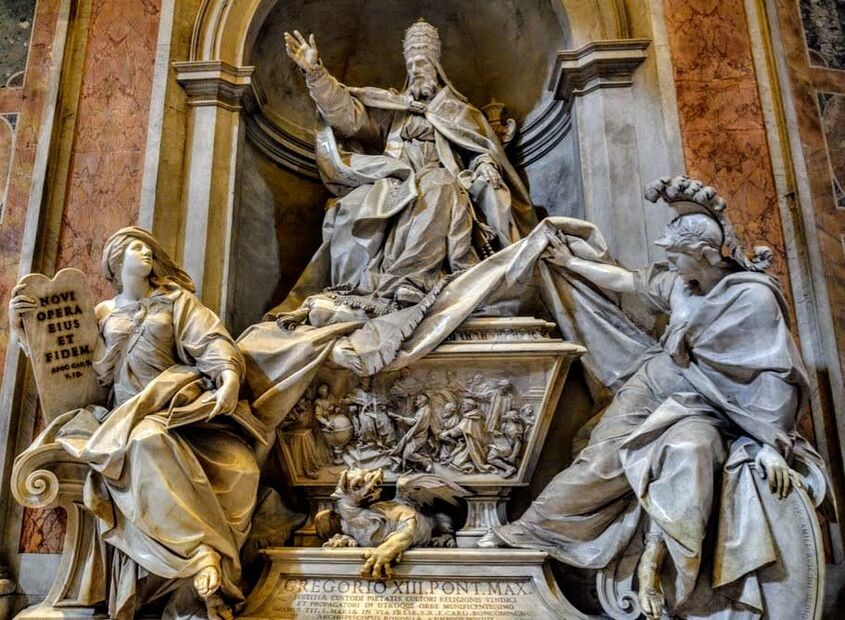 The monument to Pope Gregory XIII (r. 1572-85) was created between 1715 and 1723 by Camillo Rusconi (1658-1728). The statue on the left represents Religion, while the one on the right depicts Wisdom, in the guise of the Roman goddess Minerva. At the base of the monument crouches a splendid dragon, the heraldic device of the Boncompagni, the pope's family.

Pope Gregory XIII's greatest contribution to history was his reform of the Julian calendar, which was ever so slightly wrong. The error resulted in a drift of roughly three days in every four hundred years. By the time of Gregory XIII's papacy, the drift had reached ten days with the spring equinox falling on March 11th rather than March 21st.

As the spring equinox helps determine the date of Easter, the most important feast in the Christian year, reform of the calendar was long overdue. The Gregorian calendar differs from the Julian with respect to leap years, the definition of which was tweaked a little. Centurial years would no longer be counted as leap years, unless they were exactly divisible by four hundred. Thus 1900 was not a leap year, while 2000 was.

The relief depicts the promulgation of the new calendar in 1582, when it was declared that October 4th would be followed by October 15th. This provoked riots in the streets with people claiming the pope had stolen ten days from their lives.