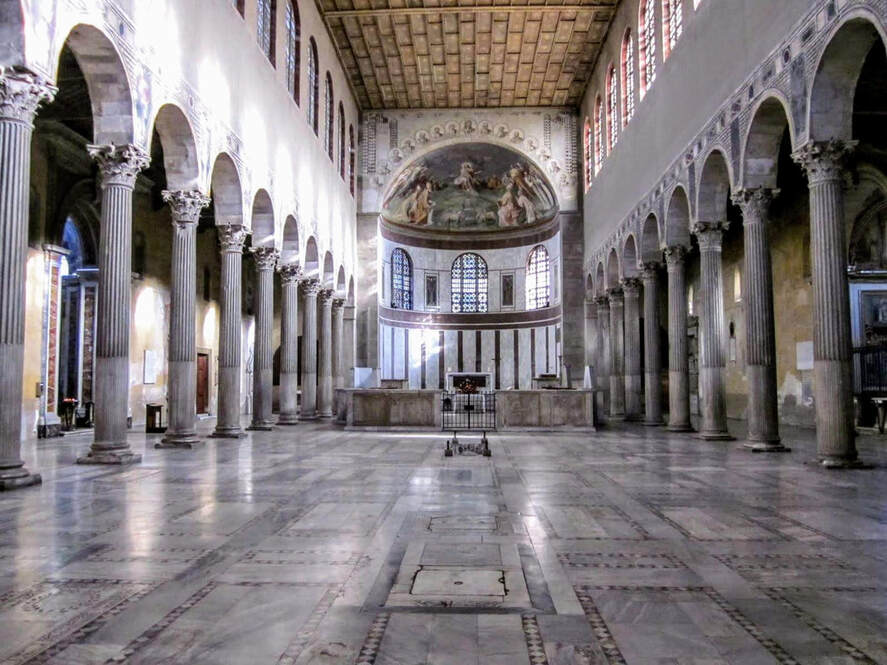 Santa Sabina
The ancient church of Santa Sabina was built by Peter of Illyria, a bishop from Dalmatia, during the reign of Pope Celestine I (r. 422-32). The church stands on the site of the Titulus Sabinae, the house-church of a Roman matron by the name of Sabina, who is believed to have been martyred during the reign of the emperor Hadrian (r. 117-138).

​In the early 13th century, Santa Sabina was granted by Pope Honorius III (r. 1216-27) to the newly-created Order of the Dominicans, to which it still belongs.

The wooden entrance door is probably the most famous aspect of Santa Sabina. The 18 cypress-wood panels date back to between 420 and 450. The panel of the Crucifixion is thought to be the oldest surviving representation of Christ crucified between two thieves in Western art.

The church of Santa Sabina was modelled on the basilicas of Ravenna and its nave was once adorned with mosaics. Sadly, only the mosaic on the counter-facade survives. The long inscription, which praises Bishop Peter of Illyria, and refers to Pope Celestine I, is flanked by two female figures, personifications of converted Jews (ex-circumcisione) and Gentiles (ex-gentibus).

The wide nave is separated from the aisles by twenty-four magnificent Corinthian columns, which have been recycled from a nearby building from the second century C. E.

The lost apse mosaic was replaced by a fresco (1560) by the Mannerist painter Taddeo Zuccari (1529-66), purportedly based on drawings of the original mosaic. This was repainted by Vincenzo Camuccini in 1836. It shows Christ enthroned in glory above the River of Life, from which sheep are drinking, and surrounded by apostles and saints.

The floor, relaid in the 20th century, has several medieval tomb-slabs. The most important is that in the middle of the nave, which depicts a Master General of the Dominicans, thought to be Muñoz de Zamora, who died in 1300. Very unusually, the effigy is in mosaic, the only one of its kind left in Rome.

Off the right-hand aisle is the Cappella di San Giacinto (Chapel of St Hyacinth), which was added in 1600 after the saint had been canonised. The frescoes are by Federico Zuccari (1539-1609) and depict scenes from the life of St Hyacinth (c.1185-1257), a polish Dominican priest, who was canonised in 1594. The altar has four alabaster columns and an altarpiece by Lavinia Fontana (1552-1614), which depicts the Virgin Mary with St Hyacinth.

The Cappella d' Elci is off the left aisle. It is a lavish and ornate Baroque creation, dedicated to St Catherine of Siena. The architect was Giovanni Battista Contini (1642-1723) and the patrons were a family of Tuscan nobles. Their coat-of-arms is splendidly rendered on the floor in opus sectile. The dome features a fresco by Giovanni Odazzi (1663-1731) of St Catherine being presented to Christ by the Virgin Mary. The altarpiece is a painting of Our Lady of the Rosary by Giovanni Battista Salvi da Sassoferrato (1609-85).
Gallery 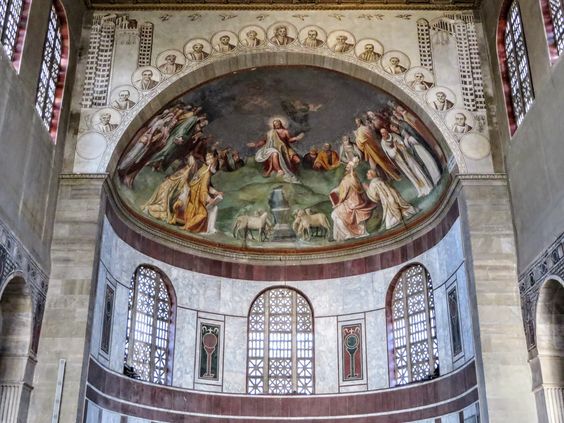