Temple of Venus and Rome 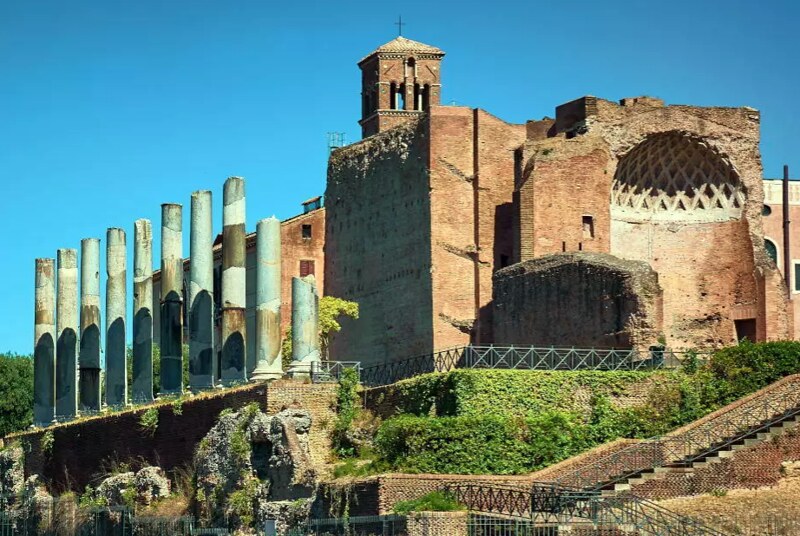 The Temple of Venus and Rome, which stands in the Forum Romanum, was the largest temple (145 metres by 100 metres) ever erected in Ancient Rome.

The temple, which was designed by the emperor Hadrian (r. 117-38), was begun circa 125 and inaugurated in 135. Roma Aeterna had not previously been worshipped as a goddess in her own right. She was coupled with Venus Felix, goddess of good fortune.

The temple stood on a high colonnaded platform. The peripteral temple measured 110 metres by 53 metres, with 10 marble columns at the front and back and 20 along each of the sides. It comprised two chambers (cellae), each housing a statue of a goddess. The cellae were arranged back-to-back, with Roma facing west and Venus facing east.

Venus was also the goddess of love (Amor in Latin), and 'Amor' is 'Roma' spelled backwards. Thus, by placing the two goddesses back-to-back in a single temple, Hadrian was also creating a clever play on their names.

The historian Cassius Dio (c. 155-c. 235) later set in train a story, which may or may not be true. Dio wrote that the most brilliant architect of Hadrian's day, Apollodorus of Damascus, was less than impressed by the emperor's design. Apollodorus commented scornfully about the size of the seated statues, saying that they would surely hurt their heads, if they tried to stand up from their thrones. The architect was banished and executed not long after he made this remark.