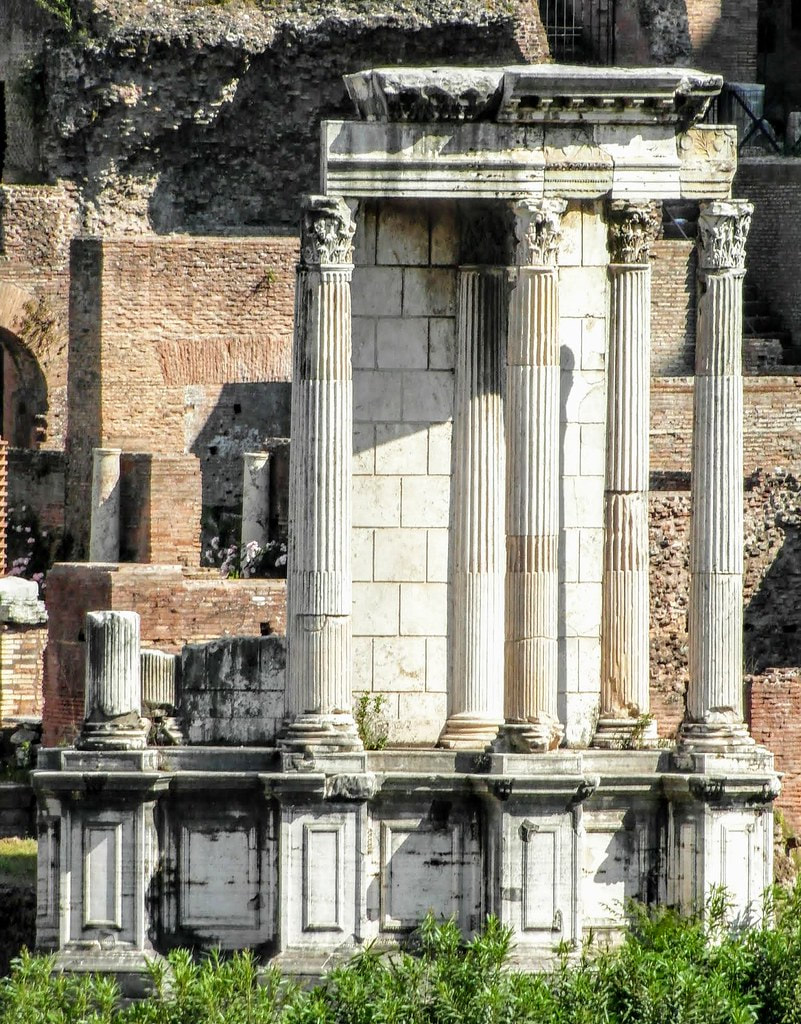 Temple of Vesta
The Temple of Vesta was a circular edifice, 15 metres in diameter, and made up of 20 Corinthian columns. All temples to Vesta were round, as the design was supposed to recall the primitive straw and wooden huts of the early Romans.

The Temple of Vesta was first built by Numa Pompilius, Rome's second king. The temple burned down many times, but was always immediately rebuilt, the last time by the emperor Septimius Severus (r. 193-211) and his wife Julia Domna. What we see today is a partial reconstruction from the 1930s.
​
Vesta was the goddess of the household hearth, a figure of great importance. Her temple, however, did not contain a statue of the goddess, only a sacred fire. The Romans believed that the sacred fire was closely tied to the fortunes of the city; its  extinction would lead to disaster falling on Rome.

The temple was looked after by a small group of priestesses known as the Vestal Virgins, handmaidens of Vesta. It was their solemn responsibility to guard the sacred fire and make sure it didn't go out.

Only girls between the ages of six and ten from patrician families were eligible to become vestals. When a position became vacant twenty candidates were chosen by the Pontifex Maximus (Rome's chief priest) and from these one was chosen by lot. The girl had to take an oath of chastity and serve for 30 years after which she was released from her vows and was free to marry. If a Vestal broke her vow of chastity, her punishment was severe: she was buried alive in a small underground chamber in the Campus Sceleratus (Evil Field) and left to die.

If a Vestal let the sacred fire go out, she was whipped by the Pontifex Maximus, who then had to rekindle the flame using two sticks of wood from a propitious tree (felix  arbor).

The Vestals enjoyed special privileges, such as being able to own and administer their own property. When they went out they were preceded by a lictor and had complete right of way on the streets. Any injury to them was punishable by death. At the games, they were allowed to share the front places with the senators and the ladies of the Imperial house. The vestals took precedence over every other woman save the wife of the emperor and shared with her alone the privilege of travelling through Rome in a carriage. If they chanced to meet a prisoner on his way to execution, they had the right to pardon him.

Inside the temple was a secret space known as an adytum, a sanctuary which contained the Palladium, a statue of Pallas Athena, which, it was believed, Aeneas had taken from Troy.  No one apart from the Vestals and the Pontifex Maximus was allowed inside the adytum.