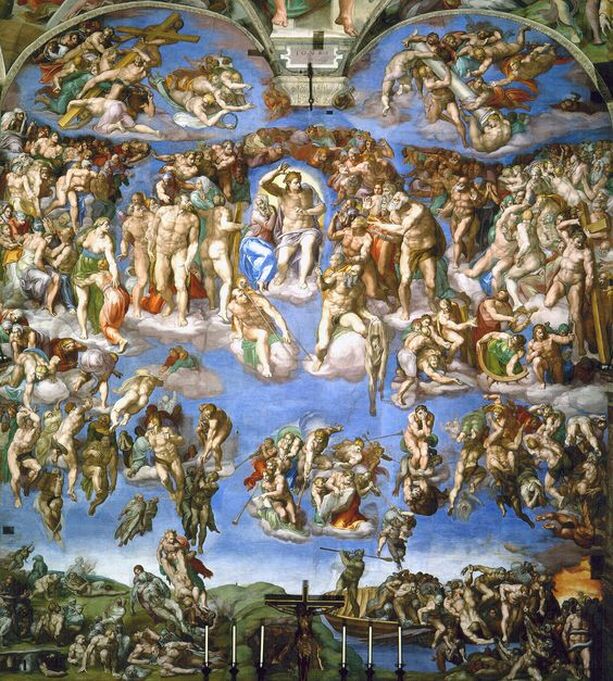 The Last Judgement
In 1534, more than twenty years after he had finished painting the ceiling, Michelangelo was persuaded by Pope Clement VII (r. 1523-34), a fellow citizen of Florence, to return to the Sistine Chapel to repaint its west wall with an image of the Resurrection. However, on September 25th of the same year the pope died. Clement’s successor, Pope Paul III (r. 1534-49), was just as keen to secure the services of the greatest artist in the world and repeated his predecessor’s offer of a commission. Michelangelo could hardly refuse a request from one pope, having accepted that of another. However, Paul III wanted the west wall of the chapel to be painted with an image of the Last Judgement rather than the Resurrection.

In order to prepare the wall for the fresco, Michelangelo had to destroy both his own work and that of fellow artist, Pietro Perugino. In addition, the two windows were filled in to create a surface 13.7 metres by 12.2 metres, for what would be, at the time, the largest single fresco in the world. In 1536, more than twenty years after he had finished painted the ceiling, he began work on the west wall. By this time, Michelangelo had turned sixty and the challenge facing him was one which would have proved daunting to a man half his age! Five years later, on October 31st, 1541, the Last Judgement was unveiled to the public.
“When the Son of Man shall come in His glory and all the holy angels with Him, then shall He sit upon the throne of His glory. And before Him shall be gathered all nations, and He shall separate them one from another as a shepherd divideth his sheep from the goats. And He shall set the sheep on His right hand, but the goats on the left.” (Matthew 26:31-33)

In his visualisation of the Last Judgement, Michelangelo broke away from the traditional format, which divided the pictorial space horizontally, with heaven above and hell below. Instead, he divided the fresco into two vertical zones, with the figure of Christ the Judge, his right arm raised rather imperiously, dominating the centre of the composition. The Virgin Mary, to his right, turns away from her son with a look of resignation. She can no longer intercede on behalf of mankind, but must await the result of the final judgement. In the centre of the lower section, the angels of the Apocalypse blow their trumpets to waken the dead and announce the end of time. Christ signals his judgement through the movement of his hands, raising his right hand to lift the blessed to heaven, while turning his left hand downwards to send the damned on their final journey to hell.
Surrounding Christ and the Madonna are a number of saints. The two most prominent are St Lawrence and St Bartholomew, whom we see below Christ’s feet. St Bartholomew holds a knife in his right hand and his flayed skin in his left. The face of the latter bears the features of Michelangelo. The two saints enjoy such a privileged position, because their feast-days were linked, respectively, to the coronation of Pope Sixtus IV and the anniversary of the chapel’s foundation.
At the edge of this central group, and to the left, are female saints, martyrs and heroines from the Old Testament, while to the right are the equivalent male figures.
In the upper section of the fresco we see groups of angels bearing the instruments of Christ’s Passion (the cross, the crown of thorns, the column), symbols of his sacrifice and the redemption of humanity.

At the bottom of the fresco we see Charon shipping the damned to Minos, the infernal judge, whose body is wrapped in the coils of a snake. This is a clear reference to Dante’s Divina Commedia.

Biagio da Cesena, who was the chapel’s Master of Ceremonies during the period Michelangelo was at work there, was very critical of the amount of naked flesh he observed in the fresco. Instead of keeping his opinions to himself, he expressed them very strongly in a letter to the pope: ‘It was most dishonest in such an honoured place to have painted so many nude figures who so dishonestly show their shame and that it was not a work for a Chapel of the Pope but for stewpots and taverns’. These views made their way to Michelangelo, who responded by giving Minos the features of the carping MC. To add insult to injury, Michelangelo depicted the serpent, which coils itself around the body of Minos/Biagio, in the act of biting a rather personal part of his anatomy!

But, perhaps, the Master of Ceremonies had the last laugh, for a few years after the fresco was painted the Catholic Church, in the wake of the reforming zeal of the Council of Trent (1545-63), decided to tighten up its control of images which it deemed inappropriate. The Mannerist painter, Daniele da Volterra, was duly brought in to ‘retouch’ the many nudes in Michelangelo’s fresco. Needless to say, such over-painting was carried out after Michelangelo’s death in 1564. Volterra’s addition of ‘drapery’ to the nude figures led to his being nicknamed Il Braghettone (the Breeches Man). Such censorship continued into the 18th and 19th centuries.

When the fresco of the Last Judgement was being restored (1980-94) a decision had to be made as to whether the over-painting should be removed. It was decided that the later additions should go, but Volterra’s initial retouching should remain, as witness to an important moment in the history of the Catholic Church.