The six frescoes depicting scenes from the life of Christ 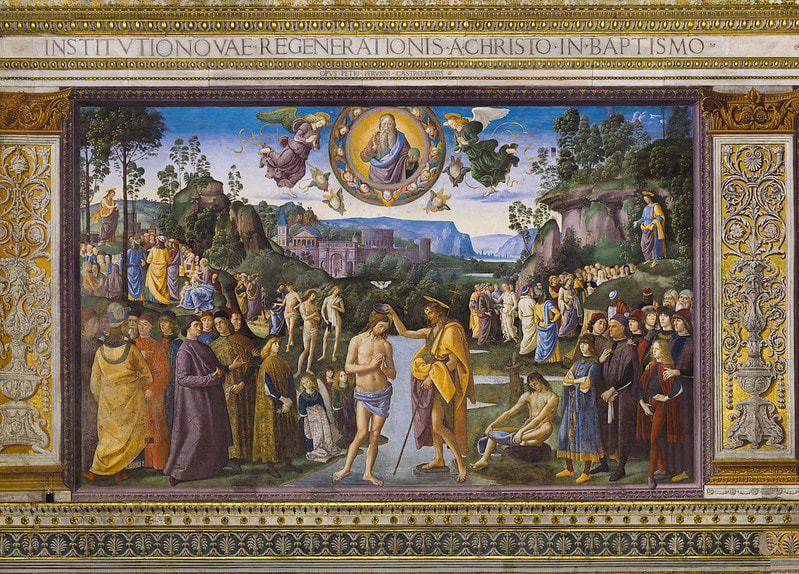 The Baptism of Christ by Botticelli
In addition to the central scene of the baptism of Christ, there are two subsidiary scenes. On the left we see John the Baptist giving a sermon, while on the right we see Christ preaching. This is the only painting in the entire chapel to carry the name of the artist. We see the inscription, OPUS PETRI PERUSINI CASTRO PLEBIS, at the top of the painting. However, this was not painted by Perugino, but added, by an unknown hand, at a later date. 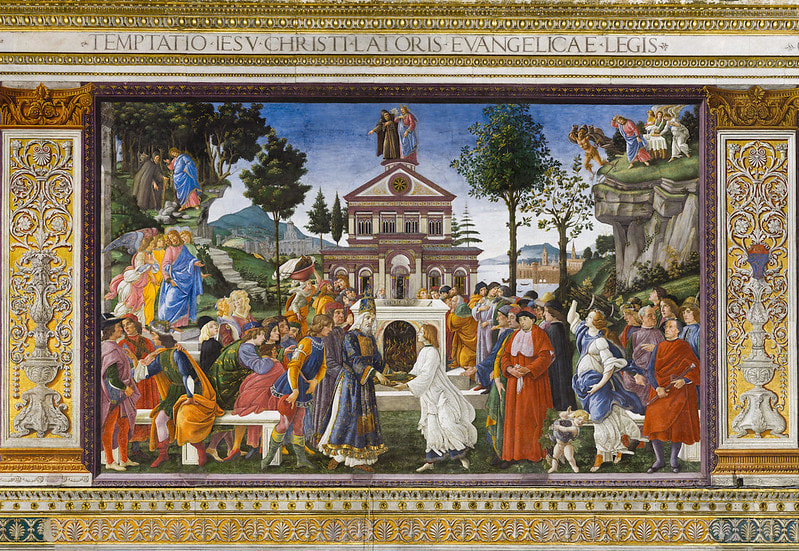 The Temptation of Christ by Botticelli
Christ's threefold temptation by the devil, as described in St Matthew’s Gospel, can be seen in the background of the picture, where the devil is disguised as a hermit. In the top left corner, the devil is challenging Christ to turn stones into bread. In the centre, at the top of the fresco, we see the two figures standing on a temple, with the devil attempting to persuade Christ to cast himself down. In the top right corner, the devil tempts Christ with command of the world’s riches. However, Christ drives away the hermit, who finally reveals his true identity.
​
Next to this scene we see that three angels have prepared a table for the celebration of the Eucharist, a scene which only becomes comprehensible when seen in conjunction with the event taking place in the foreground of the fresco. The prominent celebration of a Jewish sacrifice may be explained by seeing it as a reference to Christ’s sacrifice of himself through his crucifixion. This sacrifice is duly reconstructed in the celebration of the Eucharist, which is being prepared by the three angels. 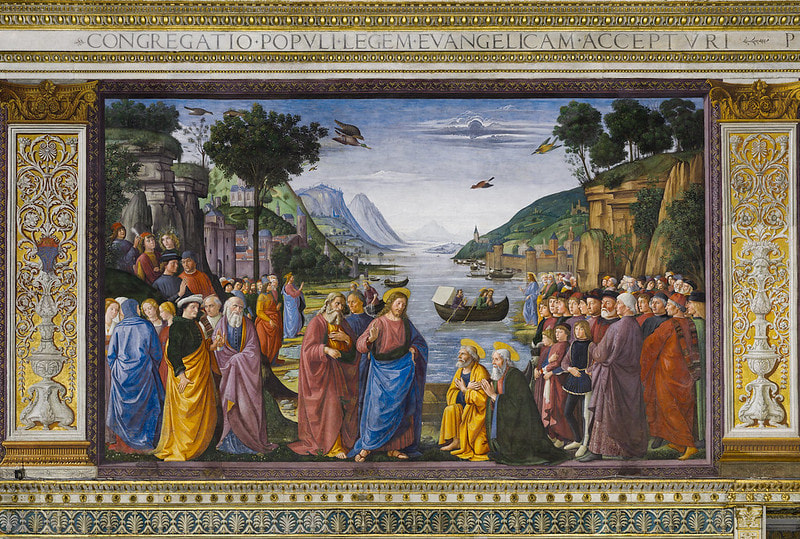 The Calling of the First Apostles by Domenico Ghirlandaio
In the centre of the fresco, Christ is blessing the brothers Simon Peter and Andrew, his first two disciples. They follow him and appear again in the background on the right. There they witness Christ calling James and John, who are sitting in a boat mending their nets with their father, Zebedee.
​
This is the only fresco by Ghirlandaio to have survived; his painting of the Resurrection of Christ, on the entrance wall, was destroyed in 1522. Ghirlandaio returned to Florence in 1482 to get married. Six years later, a thirteen-year old boy would enter his workshop as an apprentice. Exactly two decades later, the erstwhile apprentice would begin work in the same chapel where his master had once been employed. The apprentice’s name was, of course, Michelangelo di Lodovico Buonarroti Simoni. The master did not live to witness the phenomenal success of his pupil, having died in 1494. 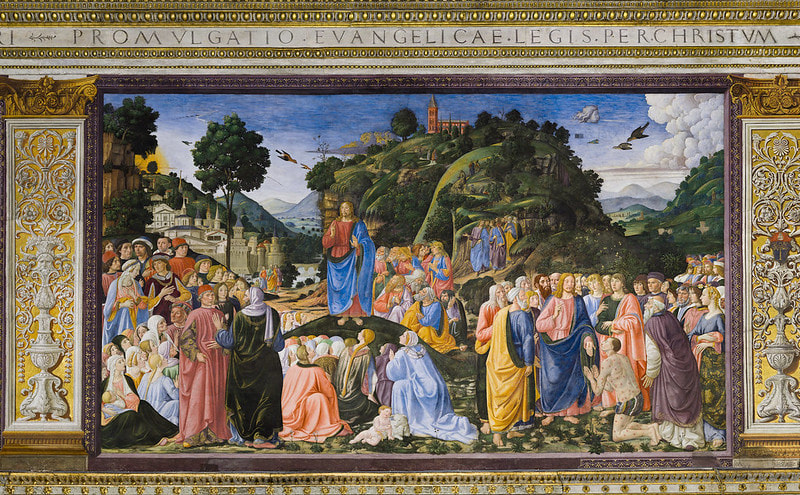 The Sermon on the Mount by Cosimo Rosselli
In the centre of the painting we see Christ delivering his sermon, while his disciples huddle close together behind him. Further back we see the disciples approaching with their master. On the right hand side of the painting Christ is seen healing a leper.

Christ Consigns the Keys to Peter by Perugino
In the centre of the fresco, Christ hands a pair of gold and silver keys to St Peter. To either side are the rest of the Apostles, who, in turn, are flanked by figures in 15th century costume. The man, on the right, who stares out of the painting, has always been identified as Perugino, while the men behind him, respectively dressed in blue and red, may be portraits of the architect (Baccio Pontelli) and the master mason (Giovannino de’ Dolci).
​
In the middle distance are two subsidiary scenes, the Tribute Money on the left and the Stoning of Christ on the right. The background is closed off by a beautiful Renaissance church or temple, flanked by two ancient Roman triumphal arches. The buildings represent the worlds of Judaism and classical antiquity, cultures which, it was thought, prepared the way for Christianity. 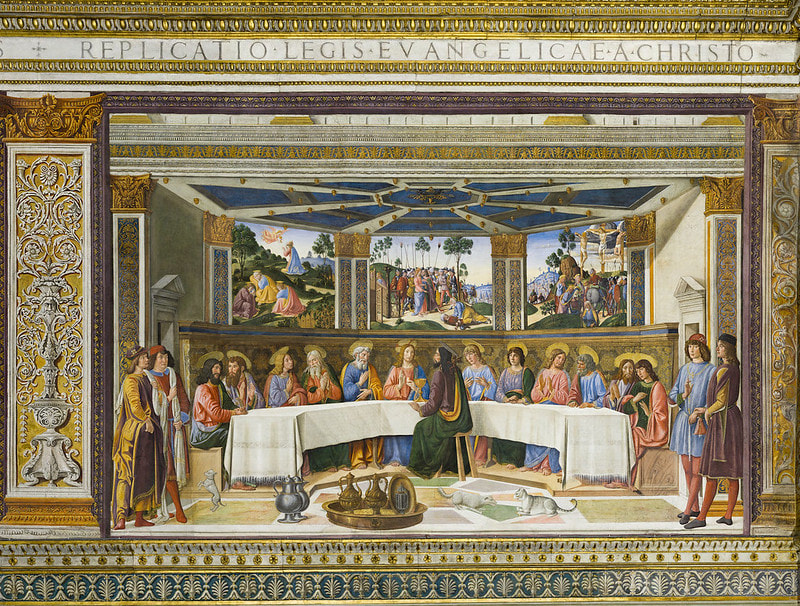 The Last Supper by Cosimo Rosselli
The chalice, which stands in the centre of an, otherwise, empty table, highlights the fact that we are seeing the institution of the Sacrament of the Eucharist, a symbol of the New Covenant between God and man. Judas sits isolated on one side of the table, with a devil perched on his right shoulder and his head capped by a dark halo.

There are three ‘window’ paintings in the background depicting Christ praying on the Mount of Olives, his Arrest and Crucifixion. In the centre of the octagonal, coffered ceiling we see the cleverly foreshortened coat of arms of Pope Sixtus IV.