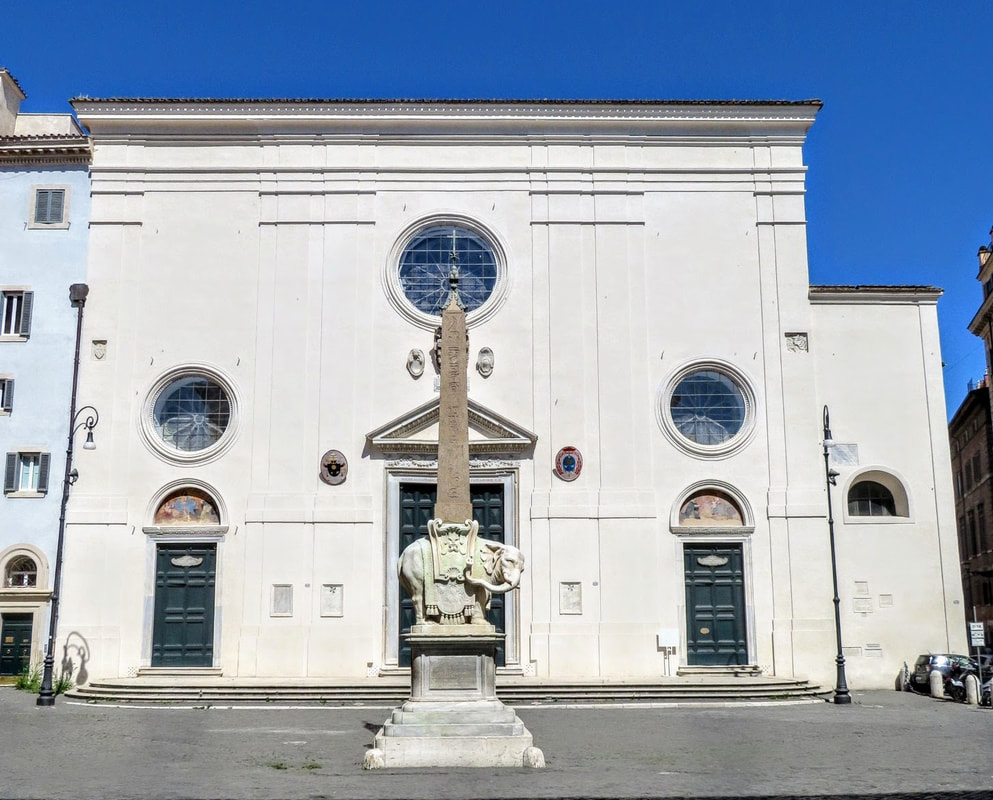 Santa Maria sopra Minerva, which belongs to the Dominican Order, is up of a nave, side aisles, transepts and a choir. The aisles are lined with private chapels. A chapel  of particular interest is the fifth off the right aisle, the Chapel of the Holy Annunciation, which was commissioned by Cardinal Juan de Torquemada (1388-1468), the uncle of the notorious Grand Inquisitor of Spain, Tomás de Torquemada. The cardinal set up the Confraternity of the Holy Annunciation, which provided dowries for girls whose parents were too poor to afford one. (Without a dowry, a girl would remain unwed). Each year (until 1870), on the feast day of St Anne, the girls who were chosen would walk in a solemn procession, their heads crowned with a garland of flowers, to receive their dowries from the pope. The painting is by Antoniazzo Romano (c.1430 - c.1510) and depicts three small girls, all dressed in white, receiving bags of money from the Virgin Mary, while Torquemada looks on.

On the left wall of the chapel is a monument to the pope who holds the record for the shortest reign in the history of the papacy. Cardinal Giovanni Battista Castagna was elected Pope Urban VII on September 15th, 1590; thirteen days later he was dead. The pope, who actually died before his coronation, left a colossal sum of money to the Confraternity of the Holy Annunciation, of which he had been a benefactor.

The sixth chapel off the right aisle is the Cappella Aldobrandini. When, in 1592, Cardinal Ippolito Aldobrandini became Pope Clement VIII he had the family chapel enlarged and redecorated. The altarpiece is by Federico Fiori, also known as Federico Barocci (1528-1612) or Il Baroccio, and depicts the Institution of the Holy Eucharist (1594). The painting is flanked by statues of St Peter and St Paul. The tombs of the pope’s mother and father line the side walls, while a rather modest statue of the pope, himself, stands in a niche to the back of the left wall.

The right transept is home to the Carafa Chapel with some of the most beautiful Renaissance frescoes to be found in Rome. The patron of the chapel was Cardinal Oliviero Carafa (1430-1511), who came from a very prominent Neapolitan family and was an influential member of the Roman Curia. When he took over the patronage of the chapel, which was already dedicated to the Virgin Mary and St Thomas Aquinas, he commissioned the Florentine artist, Filippino Lippi (1457-1504), to paint it. Lippi worked on the chapel from 1488 to 1493 and its rich and lavish decoration testifies to the wealth of his patron.

In the altarpiece, which is a fresco and not a panel painting, we see the Archangel Gabriel alighting on tiptoe to announce the Incarnation of Christ. The Virgin casts Gabriel a sidelong glance and raises her hand in a gesture that seems to bless the kneeling cardinal. The sadness on the Virgin’s face expresses, perhaps, her fore-knowledge of her son’s fate, whose death was once represented in relief at the bottom of the frame. St Thomas gazes at the Virgin as he presents the cardinal to her.
For the fresco of the Assumption of the Virgin Lippi imitated the real architecture of the entrance arch of the chapel. Although spatially unified, the scene is divided into two levels by the banner above the altarpiece. At the bottom, on either side of the altarpiece, we see the apostles. There are only eleven figures in attendance, as, according to tradition, St Thomas was not present at the event.

On the right wall there is a fresco of the Triumph of St. Thomas Aquinas over the Heretics. In the painting we can see (on the right) two boys, the future Medici popes, Leo X and Clement VII, whose funeral monuments lie close by, behind the high altar. The fresco in the lunette depicts the Miracle of the Cross of St. Thomas Aquinas. The vault is decorated with images of four sibyls rather than the customary four Evangelists.

On the left wall of the chapel is the tomb of Pope Paul IV (r. 1555-59), a member of the Carafa family and the Grand Inquisitor of Rome, who introduced the Index of Forbidden Books and ordered the enclosure of the city’s Jews in the Ghetto.

The right transept also houses the late-13th century Gothic tomb of Bishop Guillaume Durand (died 1296), the signed work of Giovanni di Cosma (died c. 1305). The partially destroyed mosaic depicts the Virgin and Child flanked by San Domenico and San Privato. All that remains of the poor bishop is his head.

Lying before the high altar we find the tomb of St Catherine of Siena, which is ascribed to the sculptor Isaia da Pisa (active 1447-64).

Catherine was born on March 25th 1347, to Giacomo di Benincasa, a cloth-dyer, and his forty-year old wife, Lapa Piagenti, in the city of Siena. One of twins, she was her mother’s twenty-third/fourth child. However, Catherine would prove to be quite different from her many siblings. She had her first vision of Christ when she was five or six years old. At the age of seven she vowed to dedicate the whole of her life to him and fourteen years later she had a vision in which she became his bride. However, instead of a gold ring, the groom placed his prepuce on her wedding finger. Catherine became a tertiary nun of the Dominican Order and was instrumental in restoring the papacy to Rome. In 1309, as a result of a conflict between the papacy and the French Crown, the pope and his court had moved to the city of Avignon, where it remained until 1377. On April 29th, 1380, little more than three years after Pope Gregory XI (r. 1370-78) had returned to Rome, Catherine died. Her body lies here in the church, but her head was removed, placed in a gilded, bronze reliquary and returned to Siena, the city of her birth. There, it was carried through the streets in procession to the church of San Domenico, where it remains to this day. Catherine’s own mother, who lived until she was almost ninety years of age, walked in the procession behind the venerated relic of her daughter.

Catherine Benincasa was canonised in 1461 by Pope Pius II (r. 1458-64), himself a citizen of the Republic of Siena. However, her effigy was carved before this event, which is why the edge of her pillow is inscribed Beata Katerina, a reference to her earlier beatification.

There are only three churches in Rome which can boast a sculpture by Michelangelo and Santa Maria sopra Minerva is one of them. Michelangelo’s statue of the Risen Christ (1519-21) stands to the left of the high altar. Christ, who is portrayed standing entirely naked, holds the cross and the instruments of his Passion. The gilded ‘loin cloth’ was a later addition. It should be added that this sculpture was Michelangelo’s second version and one with which he remained dissatisfied. He was assisted in its completion by a young assistant, Pietro Urbano. As the pupil’s work fell far short from the high standards demanded by the master, he was soon dismissed. Michelangelo had discarded the first version on discovering a black vein in the marble, which marred the face. This statue now stands in the sacristy of the church of San Vincenzo in the small town of Bassano Romano, which lies near Viterbo.

A short distance from Michelangelo’s statue lies the tomb of the Florentine painter, Fra Angelico, who died in Rome on February 18th, 1455. Fra Angelico was also a Dominican priest, which is why Santa Maria sopra Minerva became his final resting place.

In the chapel behind the tombstone, the Cappella Frangipane, there is an example of the work of Benozzo Gozzoli, Fra Angelico’s most famous pupil. It is a painting on silk of the Virgin and Child and would once have served as a processional banner. The chapel is also home to a Renaissance funeral monument, which uses a recycled ancient sarcophagus in its design. The sarcophagus is decorated with a beautiful image of Hercules fighting the Nemean lion and on top of it lies the effigy of Giovanni Arberini.

The great Baroque sculptor Gian Lorenzo Bernini (1598-1680) was to the 17th century what Michelangelo had been to the 16th. And Santa Maria sopra Minerva is fortunate enough to boast two documented works by the master. His polychrome monument to Suor Maria Raggi adorns the fifth pillar on the left side of the nave. It was created after 1647, the year Lorenzo Raggi, one of her descendants, became a cardinal. His name, and that of Ottaviano and Tommaso Raggi, are noted in the Latin inscription at the bottom of the memorial. Maria Raggi (1552-1600) was a nun, who lived in a palazzo near the church. Extremely pious, she spent much of her day in prayer and reportedly performed many miracles.

Bernini’s animated bust of Giovanni Vigevano is the highlight of his funeral monument, which stands between the third and fourth chapels off the left aisle. The whole monument was once thought to be his work, but most scholars now think that only the bust can be securely attributed to him. Bernini was still in his teens when he carved the bust.

When you leave the church look out for an image of a dog seated on a book with a torch in its mouth, which can be seen over the side doors. The Dominicans were often known as the ‘Dogs of the Lord’ (Domini canes) and the torch represents the flame of Christian truth, which the order worked to promote in its battle against heresy.

For millennia Rome was prone to heavy flooding and part of the façade of Santa Maria sopra Minerva is decorated with plaques, which record some of the heights the flood waters reached.
Gallery 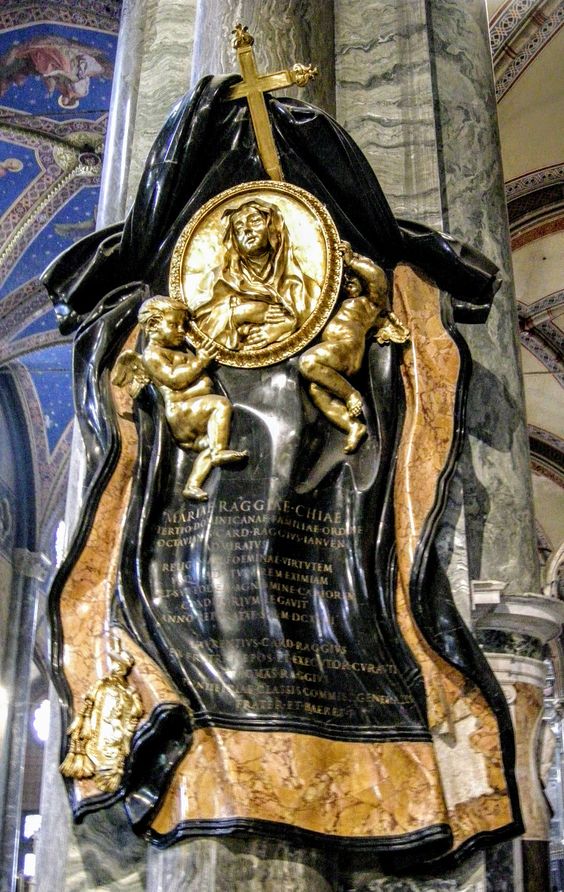 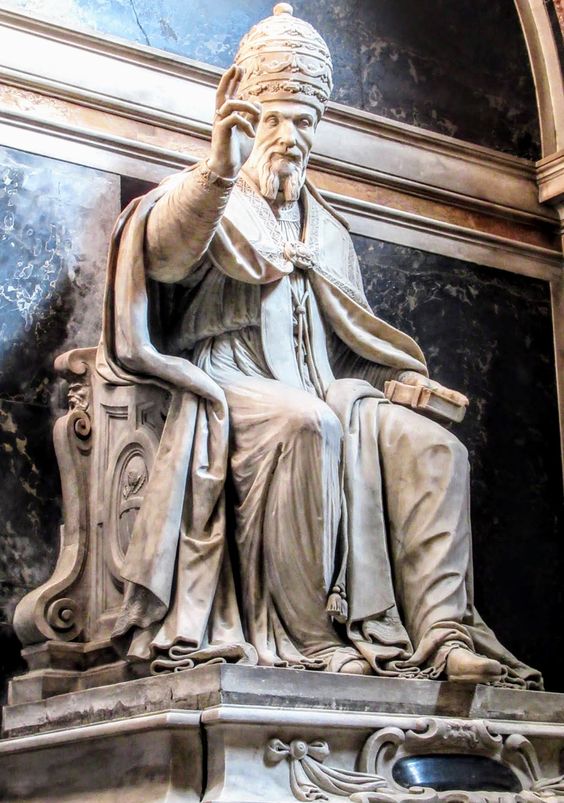 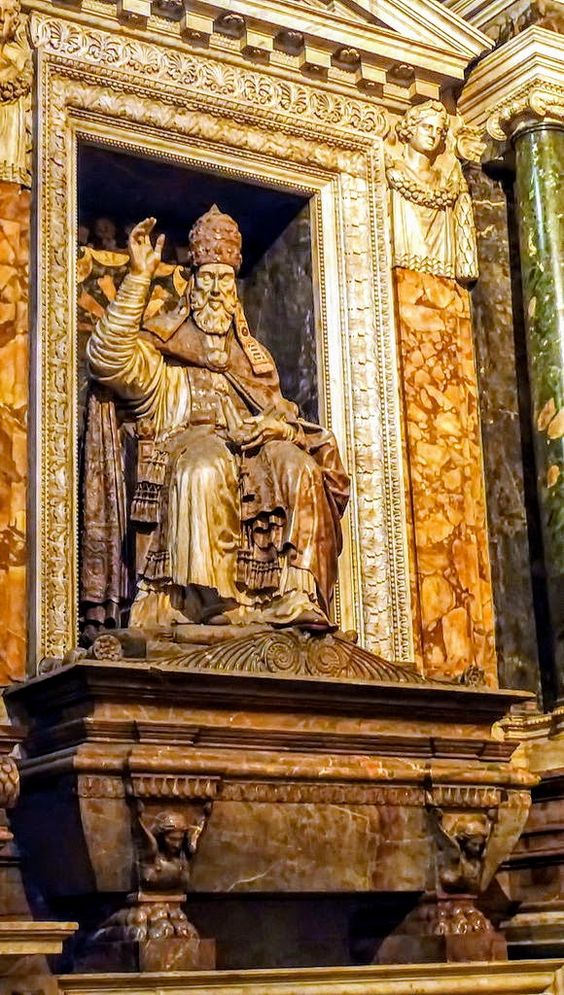 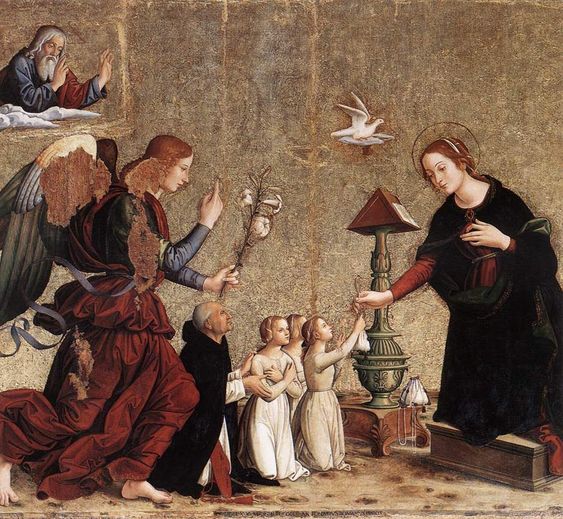 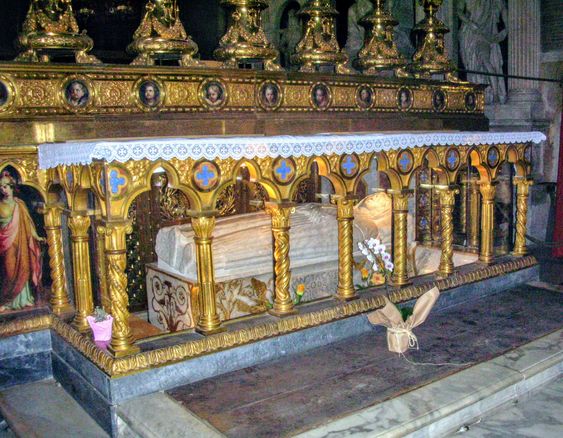 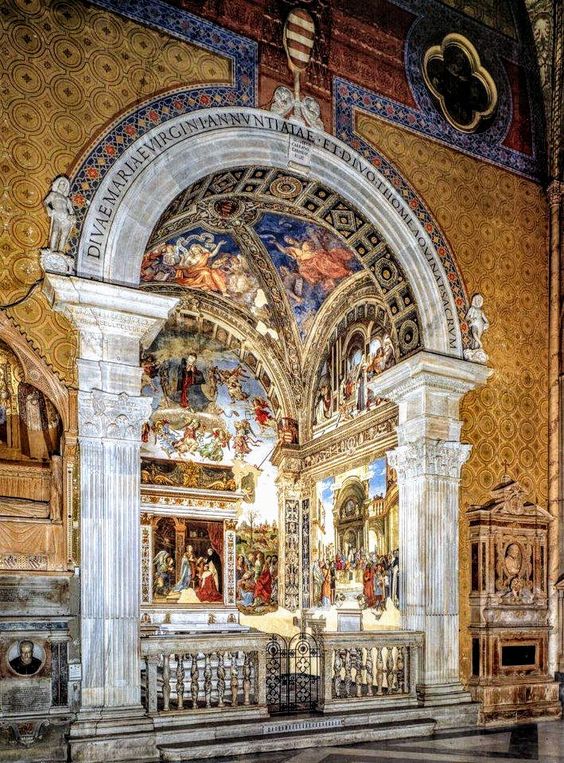 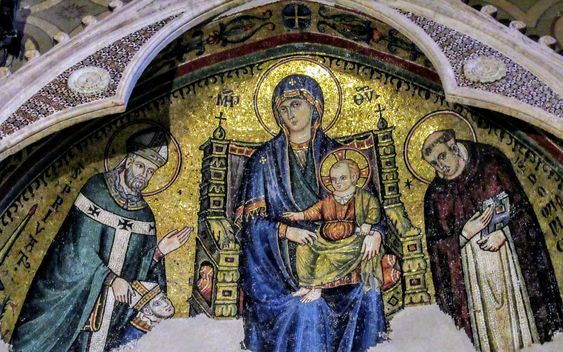 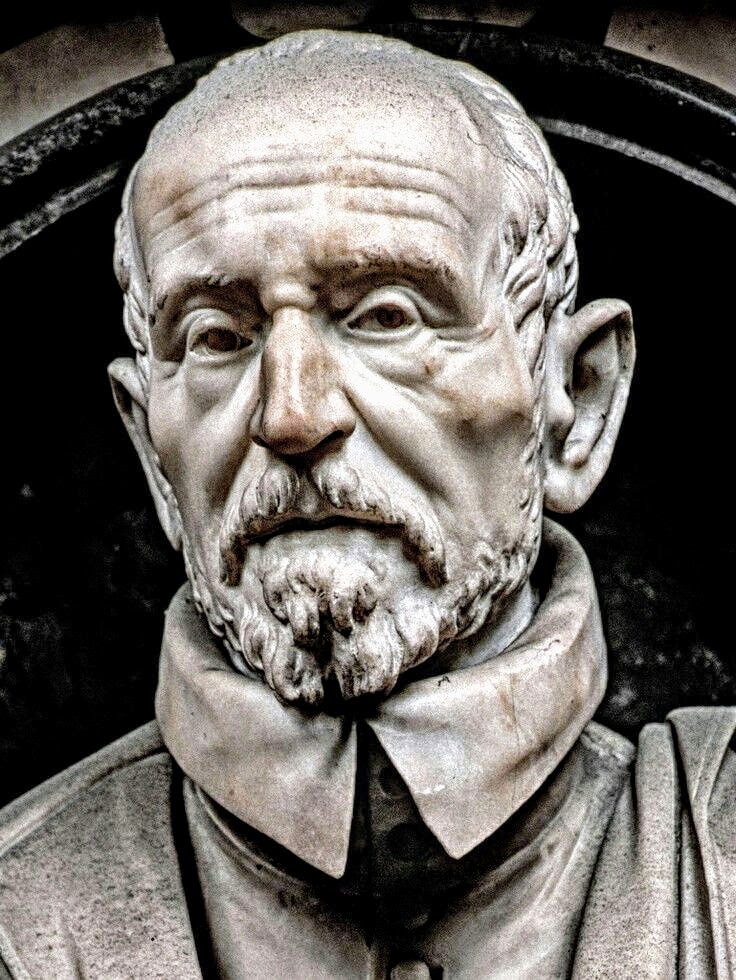 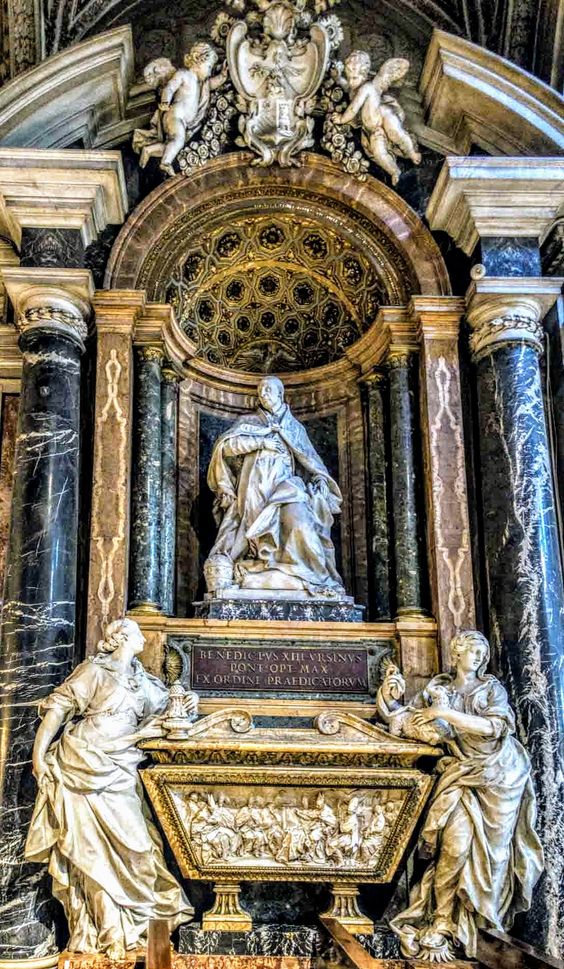