The six frescoes depicting scenes from the life of Moses 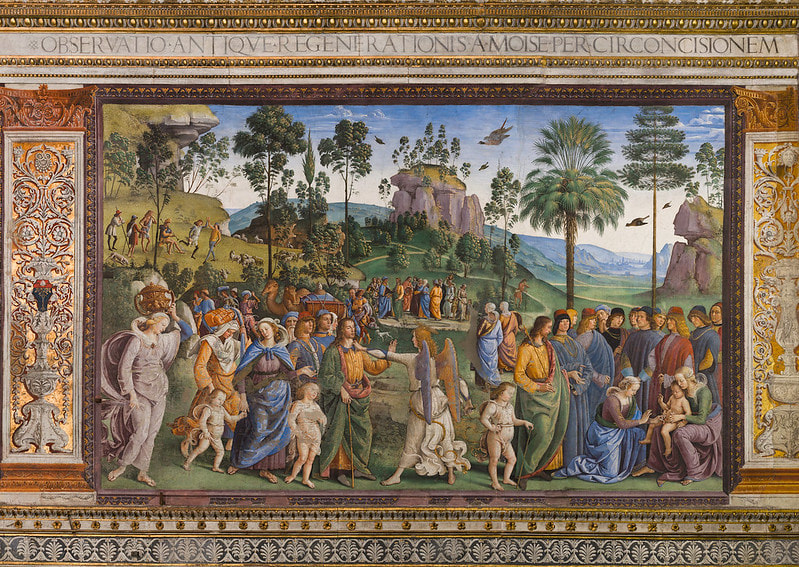 The Circumcision of Moses’ Son by Perugino
This fresco depicts the story of Moses' journey to Egypt, after exile in the land of Midian, when the angel tells him to circumcise his second son. It is paired with the Baptism of Christ on the north wall and is intended to show how Christian baptism, according to St Augustine, represents a "spiritual circumcision." 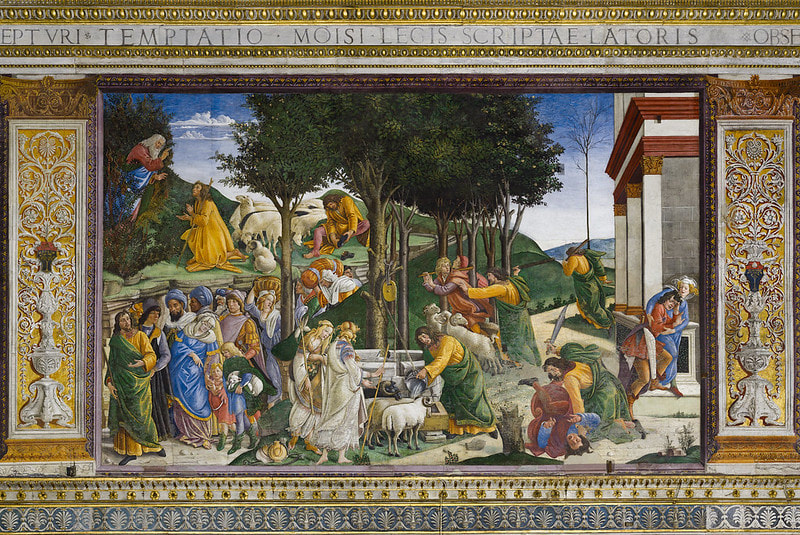 The Temptation of Moses by Botticelli
Botticelli integrated seven episodes from the life of the young Moses into the landscape with considerable skill. As the events, in the cycle of paintings on the south wall, move from right to left, so the scenes within each fresco should also be read in the same fashion. (1) Moses, dressed in yellow and green, angrily strikes an Egyptian overseer and then (2) flees to the Midianites. There (3) he disperses a group of shepherds who were preventing the daughters of Jethro from (4) drawing water at the well. After (5, 6) the divine revelation in the burning bush at the top left, Moses obeys God’s commandment and (7) leads the people of Israel in a triumphant procession from slavery in Egypt. 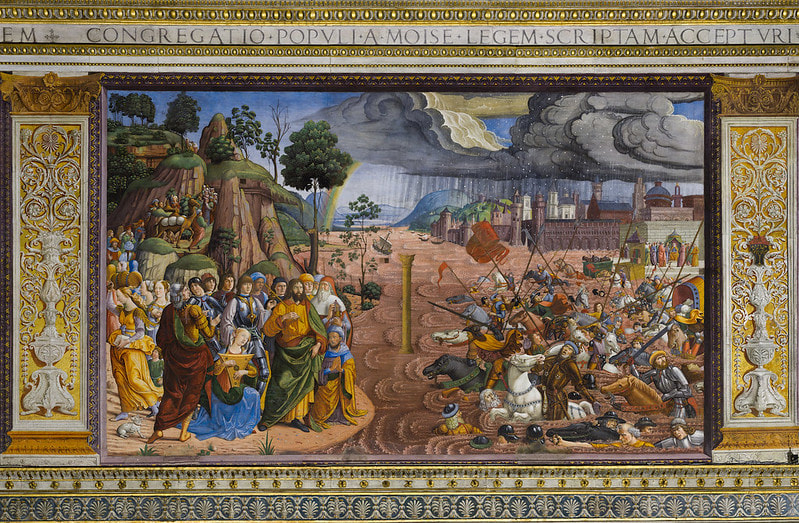 The Crossing of the Red Sea by Biagio di Antonio
The story begins in the background, to the right, where Moses and Aaron are pleading with Pharaoh to release the people of Israel. After God sends plagues on Egypt, Pharaoh finally relents, but then pursues the departing foreigners with his army. Moses parts the waters of the sea with his staff so that the Israelites can pass through them. When he raises the staff a second time the waters close up behind them, and their pursuers, Pharaoh in the lead, are drowned. Rising above the flood is the pillar of fire, with which God struck fear into the army of the Egyptians. On the left-hand side Moses stands, staff in hand, with the people of Israel. The kneeling woman in the foreground is the prophetess Miriam, who thanks the Lord for their rescue.
​
This painting used to be ascribed to Cosimo Rosselli, but it is now thought to be the work of his pupil, Biagio di Antonio. Rosselli owned a small dog, which he brought with him to work. It seems that the dog was taken up as a mascot by his fellow artists and makes an appearance in several of the frescoes. We see it here in the bottom left corner. 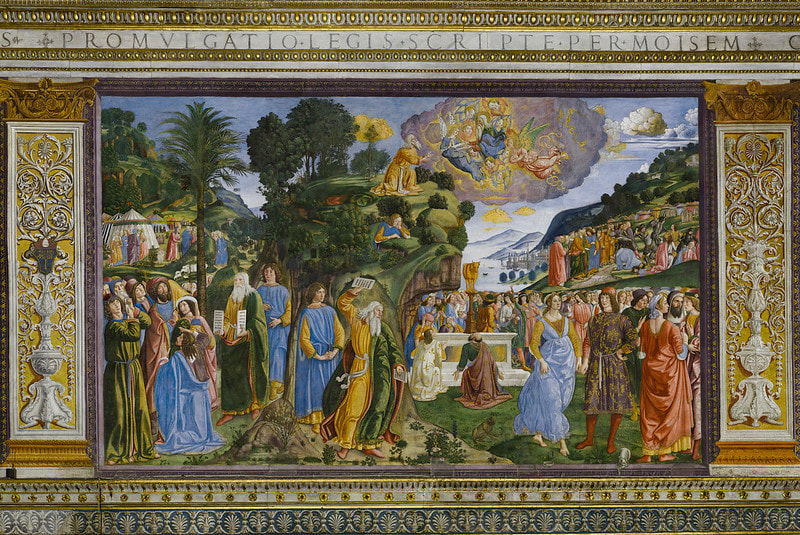 The Adoration of the Golden Calf by Cosimo Rosselli
At the top of the fresco we see Moses on Mount Sinai, where God is handing him the Tablets of the Law. The sleeping youth is Joshua, who had accompanied Moses on his climb up the mountain. On the left, Moses and Joshua have returned and the latter is showing the Tablets to the people. In the adjacent scene, he smashes them to the ground, for he has discovered that, in his absence, the Israelites, spurred on by Aaron, have been worshipping an idol, the golden calf, which is depicted in the centre. The idolaters are being put to death in the background on the right. 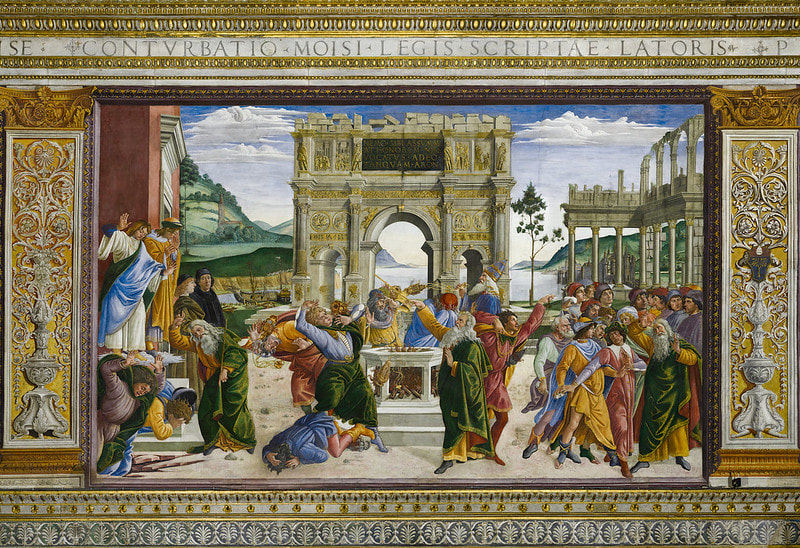 The Punishment of Korah, Dathan and Abiram by Botticelli
The fresco depicts rebellions by the Israelites against God's appointed leaders, Moses and Aaron, along with the ensuing divine punishment of the agitators. On the right-hand side, we see the people berating Moses, who is portrayed as an old man with a long, white beard. Irritated by the various trials through which their emigration from Egypt was subjecting them, the people demanded that Moses be dismissed. They wanted a new leader, one who would take them back to Egypt, and they threatened to stone Moses. However, Joshua placed himself protectively between them and their would-be victim.

The centre of the fresco shows the rebellion, under the leadership of Korah, of the sons of Aaron and some Levites, who, setting themselves up in defiance of Aaron's authority as high priest, also offered up incense. In the background we see Aaron in a blue robe, swinging his incense censer, while his rivals stagger and fall to the ground at God's behest.

Their punishment takes place on the left-hand side of the picture, where the rebels are swallowed up by the earth, which is breaking open under them. The two innocent sons of Korah, the ringleader of the rebels, appear floating on a cloud, exempted from the divine punishment.

The principal message of these scenes is made clear by the inscription in the triumphal arch: "Let no man take the honour to himself except he that is called by God, as Aaron was."

The fresco warns that God's punishment will fall upon those who oppose his appointed leaders. It was also a warning to those who questioned the ultimate authority of the pope over the church. The papal claims to leadership were God-given, their origin lay in Christ giving Peter the keys to the kingdom of heaven and thereby granting him supreme command over the new church. Perugino depicted this crucial element of the doctrine of papal supremacy, on the north wall, directly opposite Botticelli's fresco. 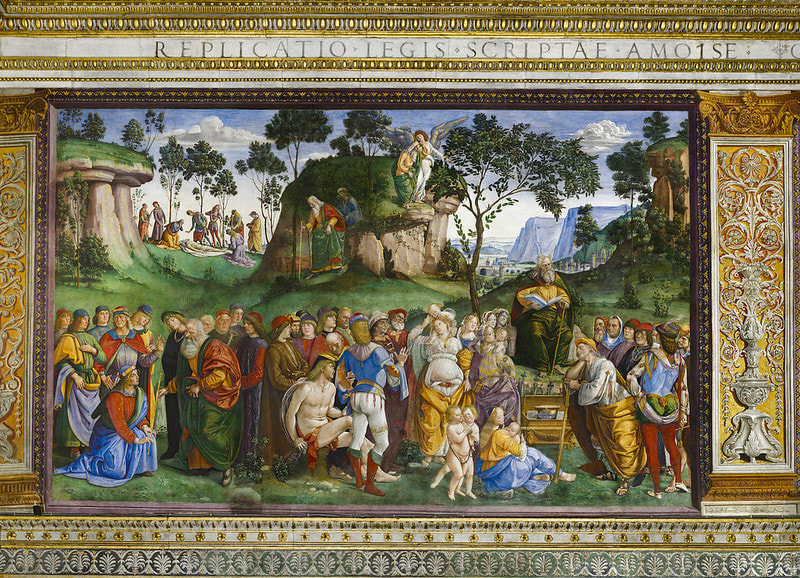 The Last Acts and Death of Moses by Signorelli
The fresco depicts the last episodes in the life of Moses. Moses sits on a mound to the right, staff in hand and with golden rays circling his head. At his feet stands the Ark of the Covenant, opened to reveal the Tablets of the Law. In the left half of the picture Joshua is appointed Moses' successor. He kneels before Moses, who gives him his staff. At the top of the picture, in the centre, we see Moses being led by the angel of the Lord to look across at the Promised Land, which, by the will of God, he will never enter. Moses’ death is depicted in the top left corner.