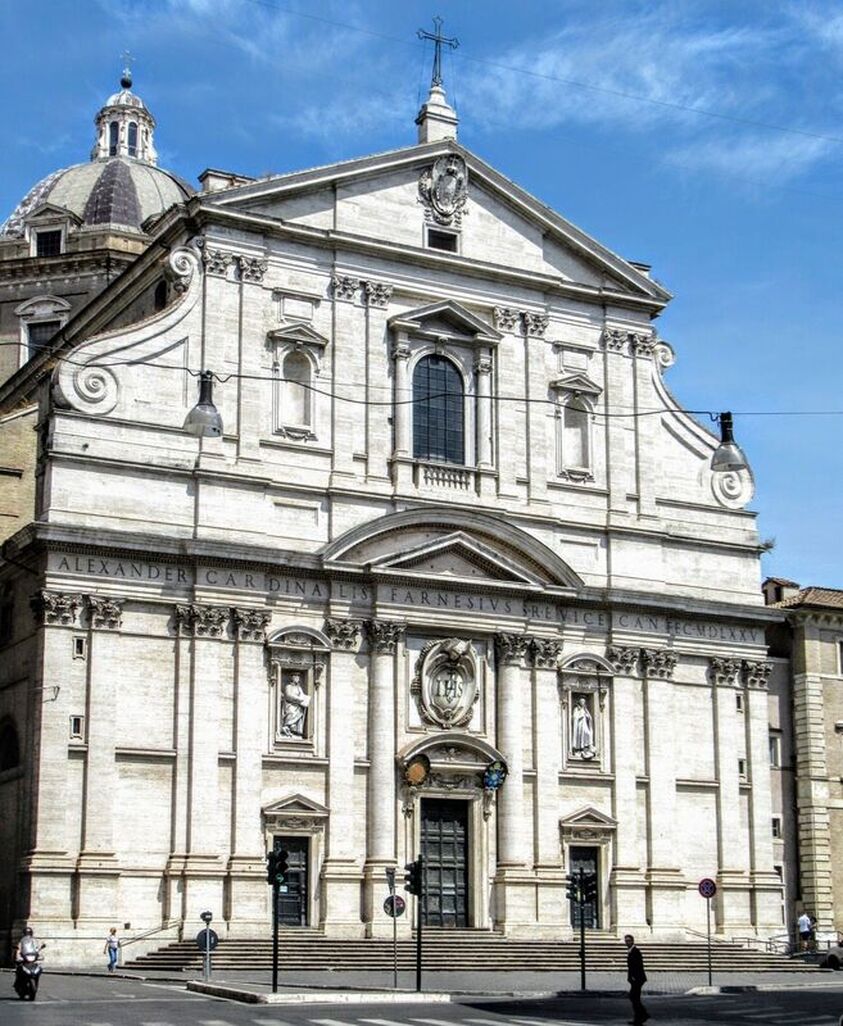 Chiesa del Gesu
From 1527 to 1590 over 50 new churches were built in Rome. One of these was Il Santissimo Nome del Gesù (The Most Sacred Name of Jesus), the mother church of the Society of Jesus, which was founded in 1534 by the Spanish soldier-turned-priest, Ignacio de Loyola. Six years later the Jesuit Order was formally approved by Pope Paul III (r. 1534-49).

Il Gesù, as the church is much better known, was begun in 1568. It was built by Giacomo Barozzi da Vignola (1507-73), often simply called il Vignola, for Cardinal Alessandro Farnese, Pope Paul III’s grandson. Following Vignola’s death in 1573, the church was completed by Giacomo della Porta (1533-1602), who designed its extremely influential façade. Il Gesù, with its single broad nave, was expressly built to hold a large congregation, all of whom should be able to see the high altar and hear the sermons, which were a central feature of Jesuit teaching. In 16th century Rome, sermons were usually only given during Lent and Advent, but the Jesuits made year-round preaching one of their principal activities.

The church was originally decorated in a simple and rather austere style, but in the second half of the 17th century all this changed. The Jesuits pulled out all the stops and simplicity was replaced by opulence, as the Society of Jesus sought to attract worshippers through grand spectacle. The fresco (1672-85) which adorns the ceiling of the nave is a splendid example of this. Painted by Giovanni Battista Gaulli (1639-1709), better known as Il Baciccia, the fresco is an absolute masterpiece of trompe l’oeil painting, depicts the Triumph of the Name of Jesus. We are reminded of the words of St Paul: ‘That at the name of Jesus every knee should bow, of things in heaven, and things in earth, and things under the earth; and that every tongue should confess that Jesus Christ is Lord to the Glory of God the Father.’ The Jesuits’ monogram, IHS, shines in a blaze of divine light. Il Baciccia goes one step further than his contemporaries in his mesmerising illusionistic effects, when his figures spill over from the picture frame into the gilded vault.

The fresco is surrounded by flying stucco angels, the work of Antonio Raggi and Leonardo Retti. The windows of the nave are also flanked by pairs of stucco statues, also by Raggi and Retti.

Extravagance is also the keynote in the design of the chapel dedicated to the founder of the Jesuits, St Ignatius Loyola (1491-1556). The chapel, which occupies the left transept, was designed by the artist and fellow Jesuit, Fra’ Andrea Pozzo (1642-1709). Pozzo, who is one of the unsung heroes of the Baroque, was joined by more than 100 artists and artisans, who worked together on the sumptuously ornate chapel from 1695 to 1699. The result is a frenetic concoction of coloured marbles, bronze, porphyry, lapis lazuli, gilt, fresco, silver and stucco. One is left wondering whether St Ignatius would have approved?

The tomb of the saint is surmounted by, what is believed to be, the largest piece of lapis lazuli in the world. A monumental statue of St Ignatius Loyola stands hidden behind the painting. Pozzo both painted the altarpiece and designed the mechanism by which it can be lowered to reveal the statue. This little piece of Baroque theatre still takes place in the church. Il Baciccia was at work again in the vault of the chapel with his fresco of the Apotheosis of St Ignatius (1685).

The chapel is railed off by one of the most beautiful creations in bronze of the late Baroque, the work of Pozzo and Pierre Le Gros the Younger (1666-1719). A multitude of putti (all, bar one, with their modesty subtly preserved) frolic between the ornate lamps. One putto holds a reference to the ‘Spiritual Exercises’ of St Ignatius Loyola, a highly popular series of meditations and prayers, which he composed between 1522 and 1524.

The dynamic sculptural group, to the right of the tomb, is the masterpiece of the French artist, Pierre Le Gros the Younger, and depicts Faith Triumphing over Heresy and Hatred. 'Religion' (or rather Catholicism) hurls down thunderbolts at 'Hatred', who is personified by an old woman, while 'Heresy', in the guise of a male figure, sprawls vanquished under her foot. A little cherub cheerfully tears his heretical tracts to pieces. If you look closely at the spines of the books on the right, you will see the names of Martin Luther and John Calvin, two of the great Protestant reformers. This was not a time of inter-faith dialogue!

The frescoes in the dome are the work of Il Baciccia, who was only twenty-two years old when he received this prestigious commission. The fresco in the cupola depicts Paradise Singing the Praise of Jesus, while those in the pendentives depict the Four Evangelists, the Four Doctors of the Church, Four Prophets and Moses and the Law. (The latter two pendentives are the ones visible from the nave). The inscription proclaims: DONAVIT ILLI QVOD EST SUPER OMNE NOMEN VT IN NOMINE JESV OMNE GENV FLECTATVR CAELESTIVM TERRESTRIVM ET INFERNORVM (He was given a name which is above every other name, so that in the name of Jesus every knee should bend, heavenly, earthly or hellish).

​The chapel in the right transept is dedicated to St Francis Xavier (1506-52), a friend and follower of St Ignatius, who worked as a missionary in the Far East, where he died. Sixty or so years later, an arm was removed from the saint’s body to be displayed in this chapel. The chapel was designed by Pietro da Cortona (1596-1669) and the altarpiece was painted by Carlo Maratta (1625-1713).

The sanctuary was remodelled between 1834 and 1843 by the architect Antonio Sarti (1791-1880). A new high altar was installed in the Neo-Classical style, a far cry from the Baroque extravagance of the rest of the church. The altarpiece depicts The Circumcision of Christ (1840) and is by Alessandro Capalti. The rather fine half-length statue (1621-24) of St Robert Bellarmine, which stands on the left, is by Gian Lorenzo Bernini (1598-1680). Cardinal Bellarmine (1542-1621) was a Jesuit theologian and one of the most important figures of the Counter-Reformation.
Gallery 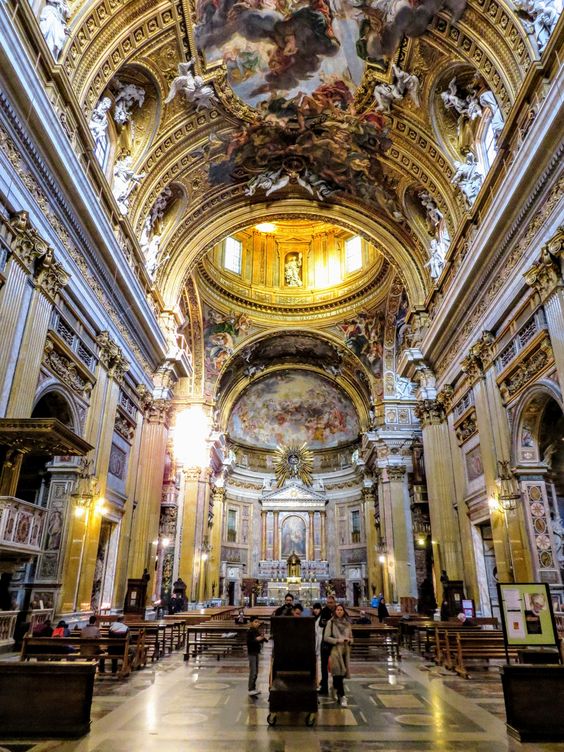 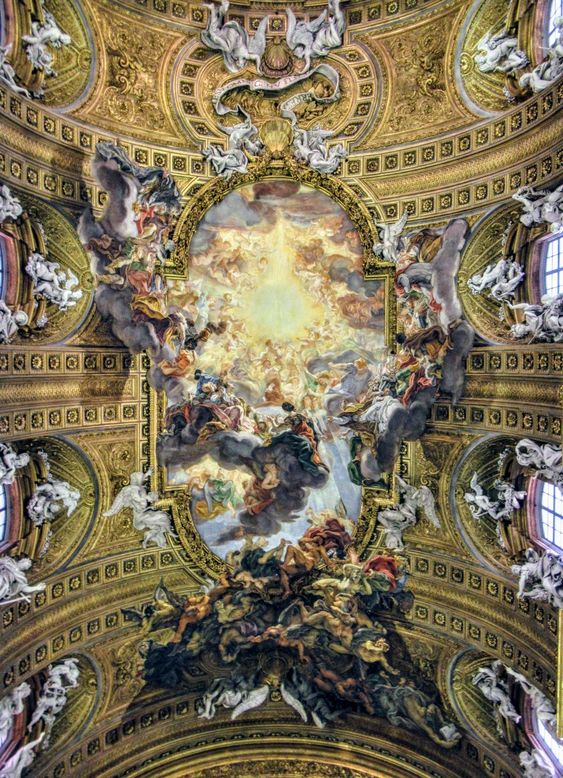 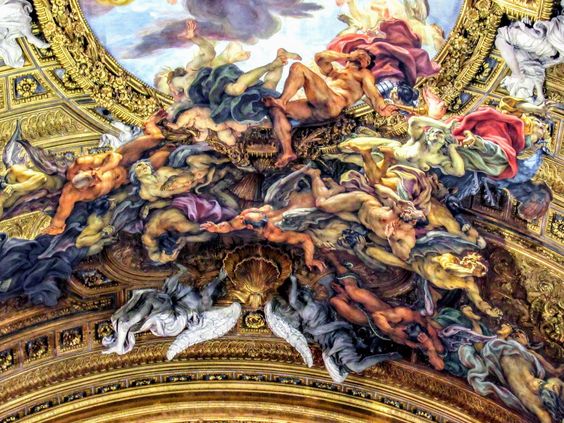 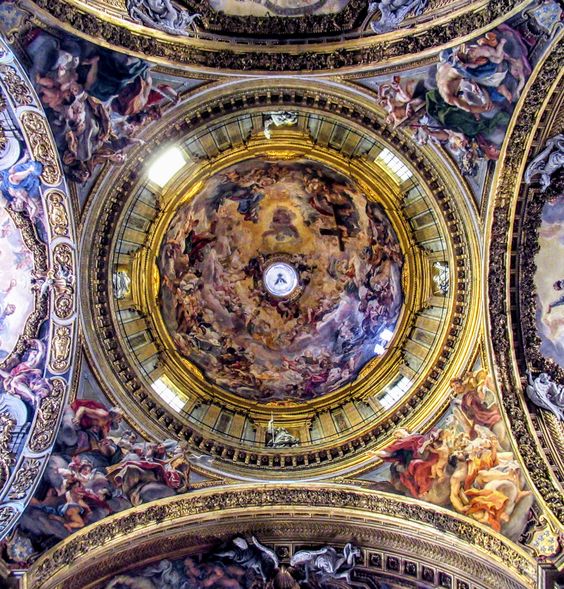 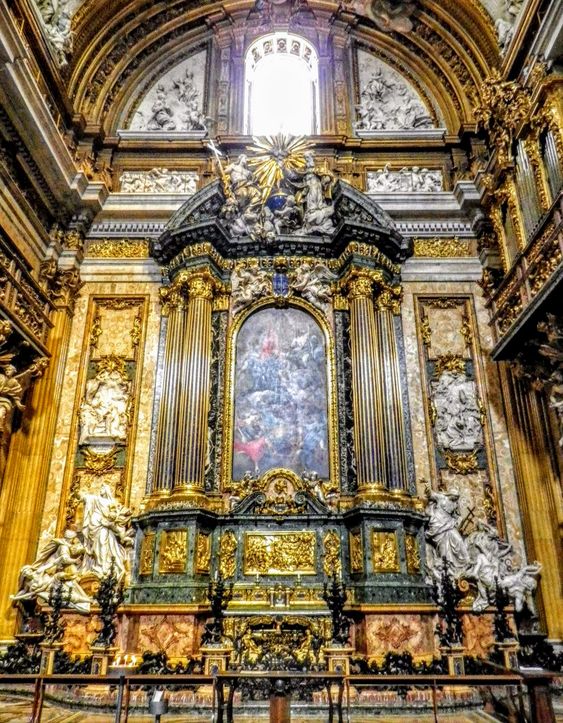 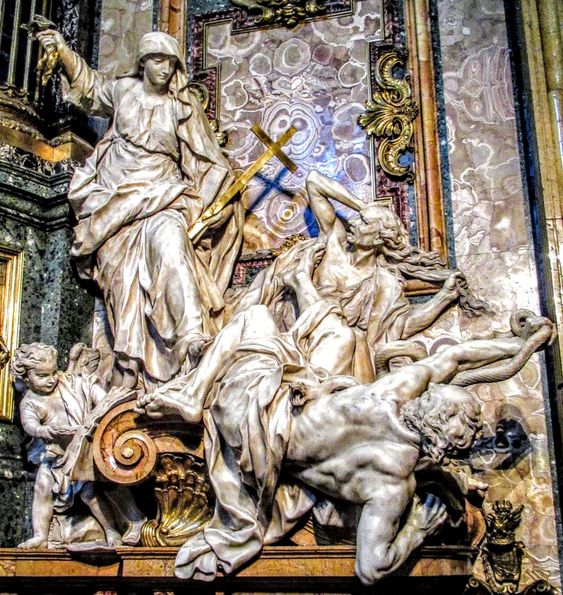 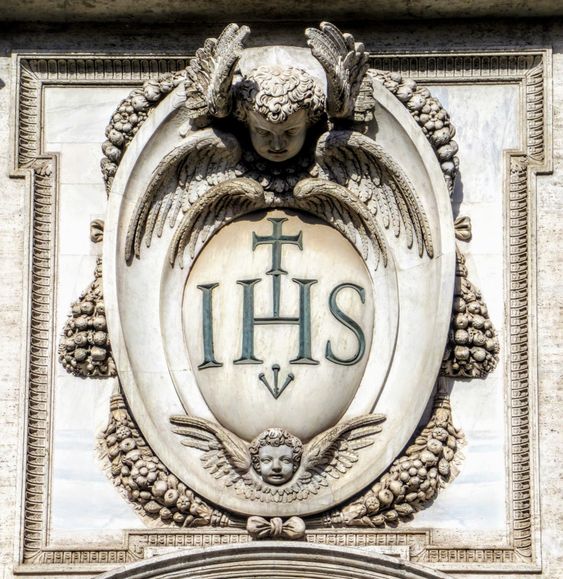 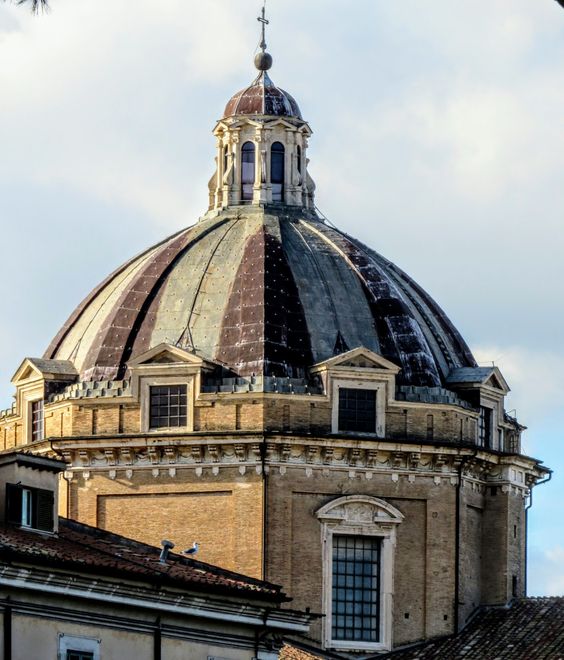 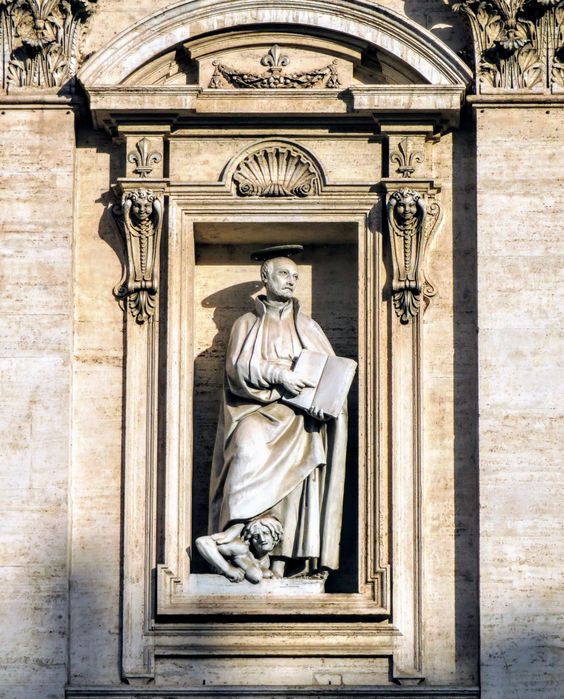 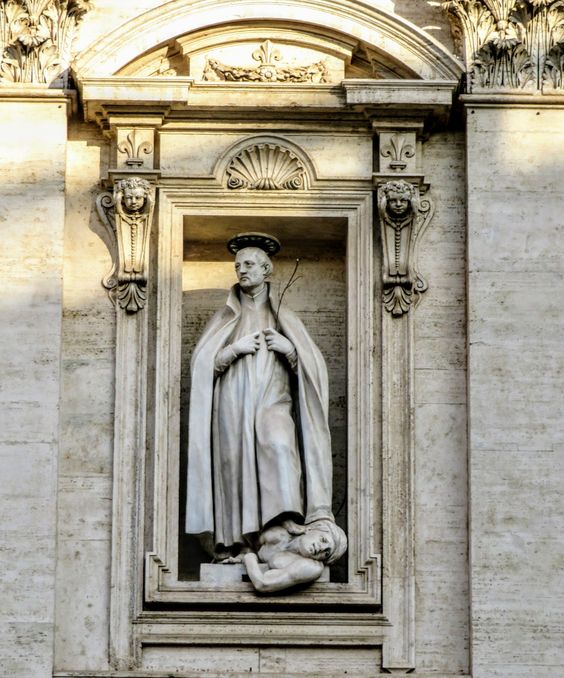 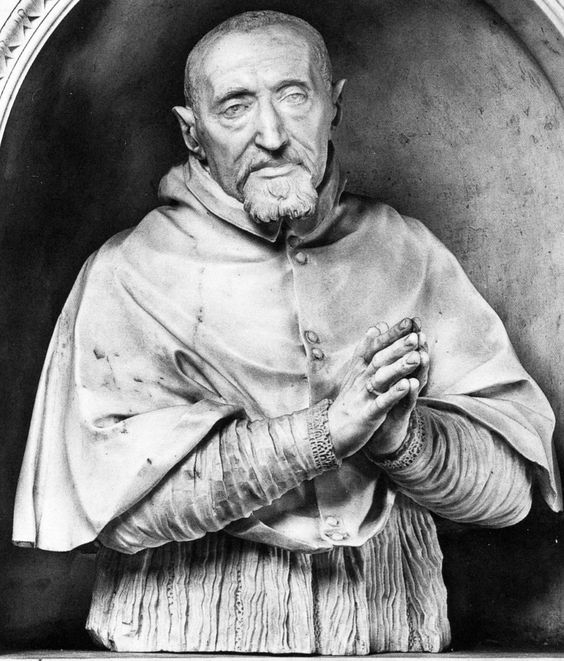 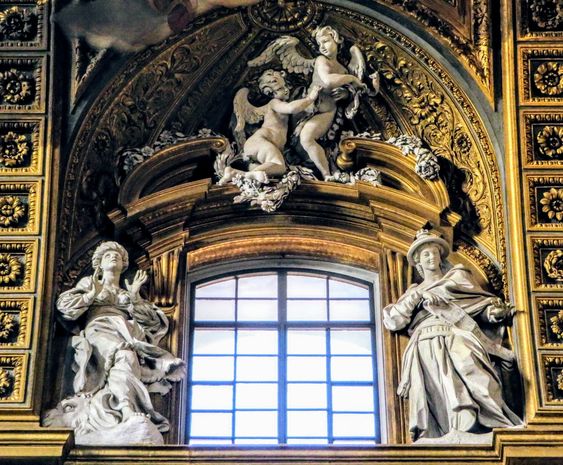 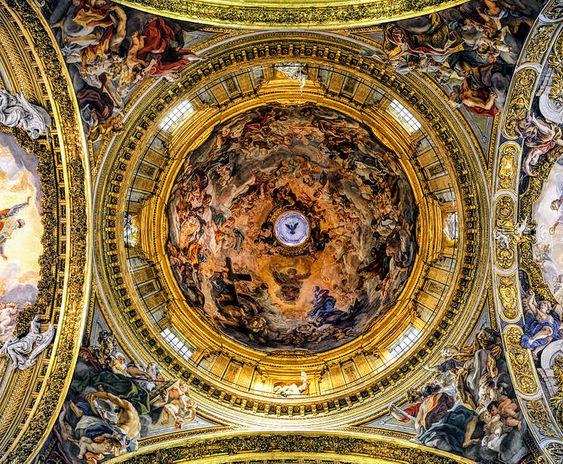