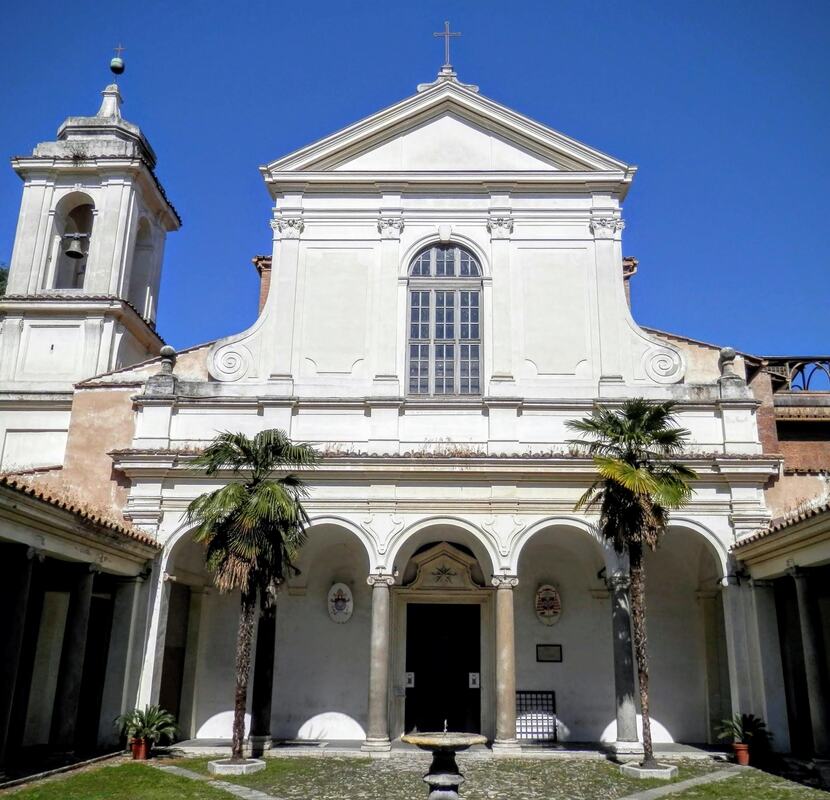 San Clemente was built during the reign of Pope Paschal II (r. 1099-1118), but, for centuries, it was thought to be the church to which St Jerome referred in 392. The existence of a second church, buried under the first, went completely unsuspected until 1857 when a priest and amateur archaeologist, Father Joseph Mullooly O.P., made the discovery of his life. Father Mullooly dug through more than twenty feet of rubble to reach an earlier church, sitting almost directly beneath the present one.  This was not an end to his discoveries, for below the newly excavated church, he later came across part of an insula (an ancient Roman apartment block) from the Republican era. Subsequent excavations by other archaeologists revealed a house and a mithraeum, both from the Imperial era.

San Clemente is one of the few medieval churches in Rome to have retained its atrium or courtyard, which is entered through a 12th century portal, known as a prothyrum. On entering the church one’s eye is drawn immediately to the stunning mosaics which decorate the apse, the most beautiful to be seen anywhere in Rome.

The nave is divided from the side aisles by a collection of ancient granite and marble columns. The pavement is laid out in a style known as Cosmatesque, after the Cosmati family, workers of marble, who flourished during the 12th and 13th centuries. The style, also known as opus alexandrinum, was used most extensively for church floors, but also for pulpits, columns and Episcopal thrones. The Cosmati used marble salvaged from the ruins of ancient Roman buildings to create their geometric designs.

Discs of porphyry and granite lead to the schola cantorum, the 6th century choir enclosure, which was rescued from the older church. It is decorated with the monogram of Pope John II (r. 533-55). The ambo on the left side and the Paschal candlestick were later additions. A marble screen separates the main body of the church from the high altar, where we find the tombs of St Clement, to whom the church is dedicated, and St Ignatius of Antioch. There is an image of an anchor (the attribute of St Clement) entwined with a cross on the canopy over the altar. At the back of the apse is an ancient throne.

However, it is the mosaics which are the glory of the church and, as such, they deserve special attention. The mosaic in the apse tells the story of salvation through the Incarnation of the son of God and His redeeming sacrifice on the Cross.
The words of Christ from the Gospel of St John, ‘I am the vine, you are the branches’, are recalled in the inscription at the base of the apse: ECCLESIAM CHRISTI VITI……VIRENTEM (We have likened the church to this vine; the Law made it wither but the Cross causes it to bloom…). The vine is, in fact, a huge acanthus, which is watered by the blood of Christ as it flows from the wound in his body. The vine spreads across the apse and we see all manner of people sheltering between its branches. The Church thus becomes the vineyard of the Lord. According to an ancient legend, the cross on which Christ was crucified was made from the wood of the Tree of Life in the Garden of Eden. Therefore, Christ through his death redeems the sin of Adam. The Virgin Mary and St John the Evangelist stand on either side of the Cross, which is festooned with twelve white doves, a reference to the apostles or, perhaps, to the souls of the redeemed.

The cross is surmounted by the hand of God holding a wreath, a symbol of victory, while at the base we see the four rivers of Paradise. The rivers are fed by ‘the river of the water of life, bright as crystal, flowing from the Throne of God and of the Lamb’ (Book of Revelations, 22:1), in other words from the Cross. Two deer drink from the rivers of salvation, recalling the words of the psalmist, ‘As a hart longs for the flowing streams, so longs my soul for thee, O God.’ At the bottom of the bush a tiny deer sniffs at a serpent, the symbol of sin. The deer are flanked by two peacocks, symbols of immortality. Beyond the peacocks are a series of scenes depicting everyday life in the middle-ages. A woman feeds her hens; serfs tend their flocks and herds.

In line with the foot of the cross are the four Doctors of the Church, St Ambrose and St Gregory on the right, St Augustine and St Jerome on the left. On the same level as the Doctors are two groups of people, which may represent the family of the artist’s patron. Lower down, against a blue background, is Christ as the Agnus Dei. He is joined by twelve lambs (representing the twelve apostles), which emerge from the cities of Bethlehem and Jerusalem. Who is the small figure that stands above the gate of Bethlehem? Does he represent the infant Jesus?

At the top of the apsidal arch, we see Christ as Pantokrator (Ruler of all), no longer a martyr on the Cross, but as the judge of all mankind. He holds a book in one hand and raises the other in blessing. He is flanked by symbolic representations of the four evangelists set amongst colourful clouds. At a lower level, and on the left, St Lawrence is learning from St Paul to follow the cross. St Lawrence holds a cross in his left hand and rests his feet on a gridiron, under which a fire is burning. This refers to the manner of his martyrdom, for legend has it that he was roasted alive in 253 C.E. Below this group stands the prophet Isaiah holding a scroll inscribed with the words: VIDI DOMINVM SEDENTEM SVP SOLIVM (I saw the Lord sitting upon a throne).

On the right, St Peter instructs St Clement: RESPICE PROMISSVM CLEMENS A ME TIBI SVM (Clement behold Christ promised to you by me). St Clement is depicted with his feet on a boat, around which fish are swimming. The saint is said to have been martyred by being tied to an anchor and thrown into the Black Sea. He holds an anchor in his left hand, but it has been partly obscured by the 18th century ceiling. Below this group is the prophet Jeremiah, who holds a scroll on which is written: HIC EST DSNR ET NESTIMABIT ALIVS ABSQ ILLO (This is our Lord and no other can compare with Him).
At the apex of the vault is the Chi Rho, the monogram of Christ, from which hang the letters alpha and omega, the first and last letters of the Greek alphabet. We recall the words in the Book of Revelation: ‘I am the alpha and omega.’ Framing the whole apse, in gold letters on a blue background, are the words, GLORIA IN EXCELSIS DEO SEDENTI SVP THRONVM ET IN TERRA PAX HOMINIBVS BONAE VOLVNTATIS (Glory to God on high sitting on the throne, and on earth peace to all men of good will).

The bottom of the apse wall is decorated with large 14th century frescoes of Christ, the Virgin Mary and eleven of the apostles (St Matthias is missing).

The second great attraction of San Clemente is the Cappella Castiglione, which can be found at the beginning of the left aisle. This was the first chapel in Rome to be frescoed following the election, in 1417, of Oddone Colonna as Pope Martin V (r. 1417-31), an election which brought to an end almost fifty years of schism, when the church had more than one claimant to the throne of the Holy See.

The chapel’s patron was Branda Castiglione, a distinguished member of a Milanese family, who was the titular cardinal of San Clemente. The choice of subject-matter reflects the personal history and interests of the patron. Both St Ambrose, patron saint of Milan, scholar and fighter against schism and heresy, and St Catherine, defender of the faith and church orthodoxy, were appropriate models for Castiglione, a leading humanist and a staunch opponent of doctrinal divisions and heresy. The frescoes were painted by Masolino da Panicale (1383-1447) between 1428 and 1432. On the entrance wall of the chapel are images of the Annunciation and St Christopher.

By the advent of 18th century, San Clemente was in a very poor state of repair. It was restored at the behest of Pope Clement XI (r. 1700–1721). The splendid wooden ceiling, which sports the pope's coat of arms, was one of the products of this restoration. The central fresco depicts the Apotheosis of St Clement, the work of Giuseppe Chiari (1654-1727). The frescoes on the upper walls of the nave  depict scenes from the lives of St Clement (left wall) and St Ignatius of Antioch (right wall).

The original 4th century basilica, and the ancient Roman remains, can all be visited. The earlier basilica was slightly larger than the later one, which basically replicated its design. A few frescoes from as early as the 9th century have survived.

The painting of St Clement celebrating Mass and the Legend of Sisinnius is, perhaps, more interesting for its text than its images. In the lower right corner we can read one of the oldest surviving examples of the Italian vernacular in the words, Fili dele pute (Son of a whore). The story goes that Sisinnius, the husband of a Christian woman, was disrespectful in church and was accordingly struck blind. Although St Clement interceded on his behalf and restored his sight, Sisinnius, rather ungraciously, ordered his soldiers to arrest him. The forces of law and order immediately started hallucinating and grabbed a column instead of St Clement. Fili dele pute was Sisinnius’s choice comment on this turn of events!

Underneath the 4th century basilica, and two floors below the present street level, are the remains of two buildings, which are separated from each other by a narrow passageway. On one side of the passage is a brick insula (an ancient Roman apartment block), while on the other side are the ground-floor rooms of a mansion from the 1st century CE. The latter may have belonged to Titus Flavius Clemens, who is thought to have been executed in 95. His house might have been the venue for gatherings of Christians until the church was built in the 4th century. Clemens is not to be confused with his contemporary Pope St Clement I, to whom the church is dedicated.

Across the passageway are the remains of a small Mithraic temple (late 2nd or early 3rd century). It consists of an ante-chamber with stone seating, a triclinium (dining-room) with a marble altar and a third chamber, which may have functioned as a room for the instruction of neophytes. The seven niches in the chamber might represent the seven stages of the initiation into Mithraism. Mithraism was a mystery religion, which was practised across the Roman Empire from the 1st to the 4th century CE. Membership was restricted to men and the religion was particularly popular with soldiers.
Gallery 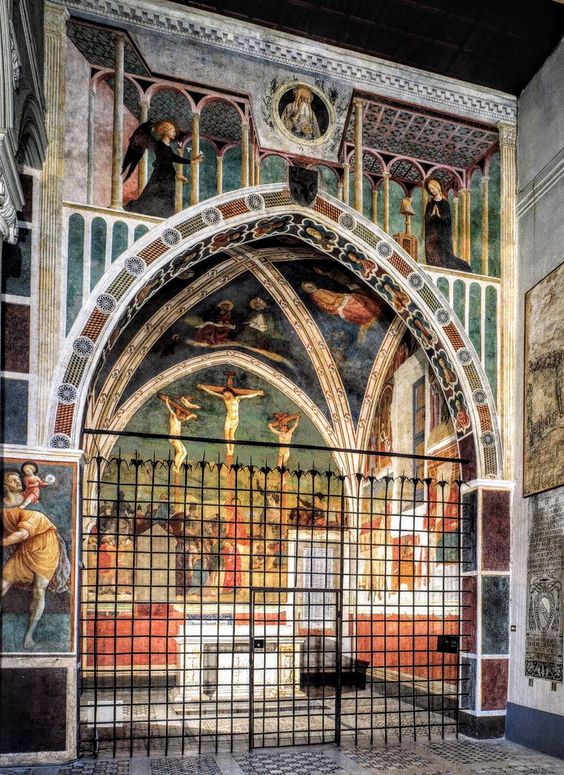 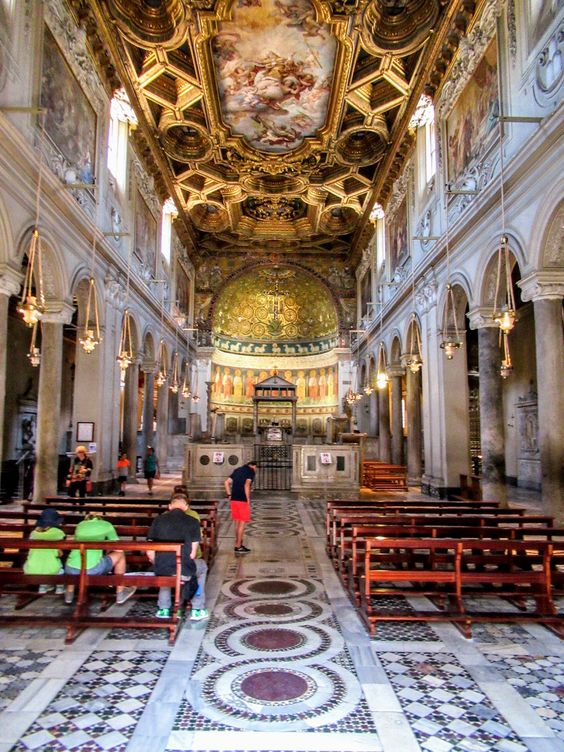 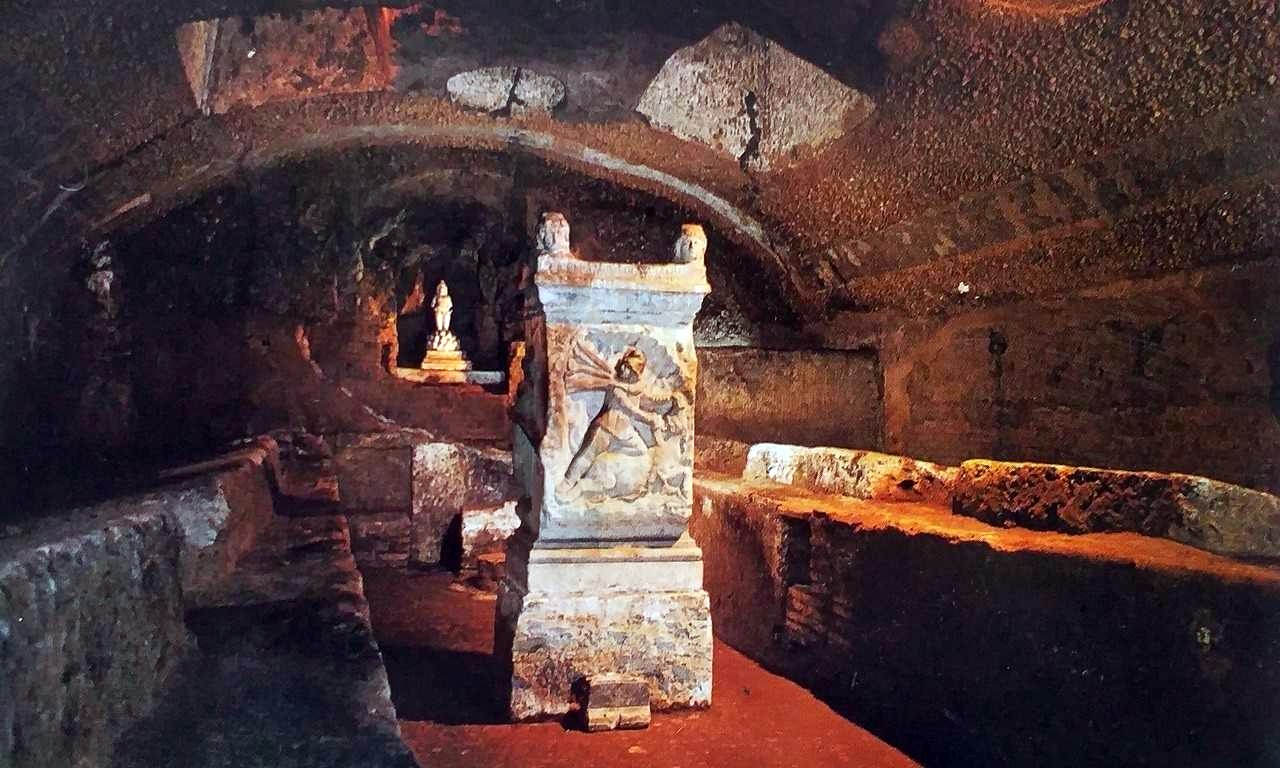 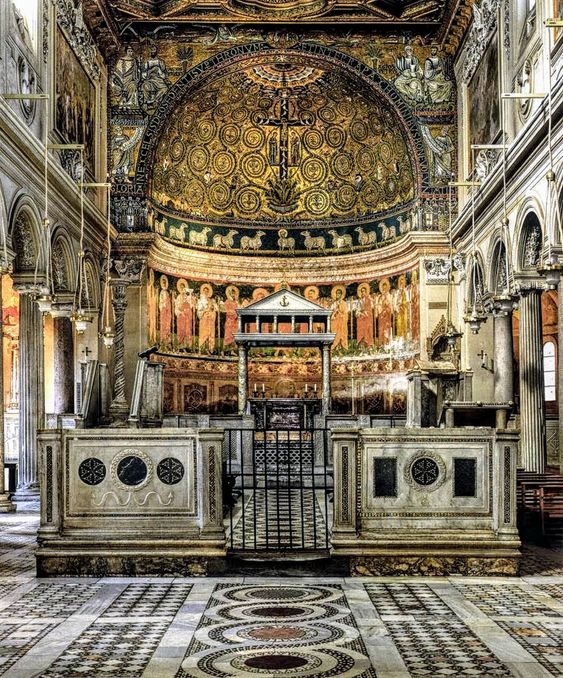 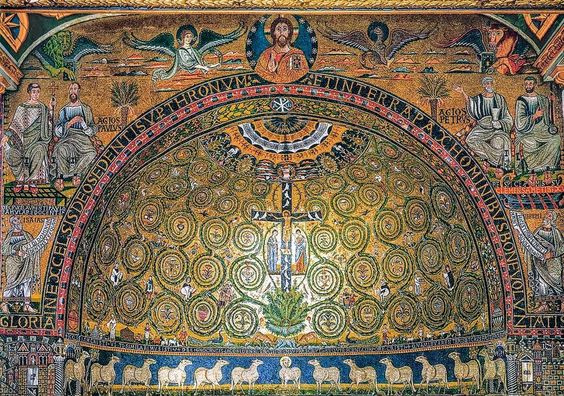 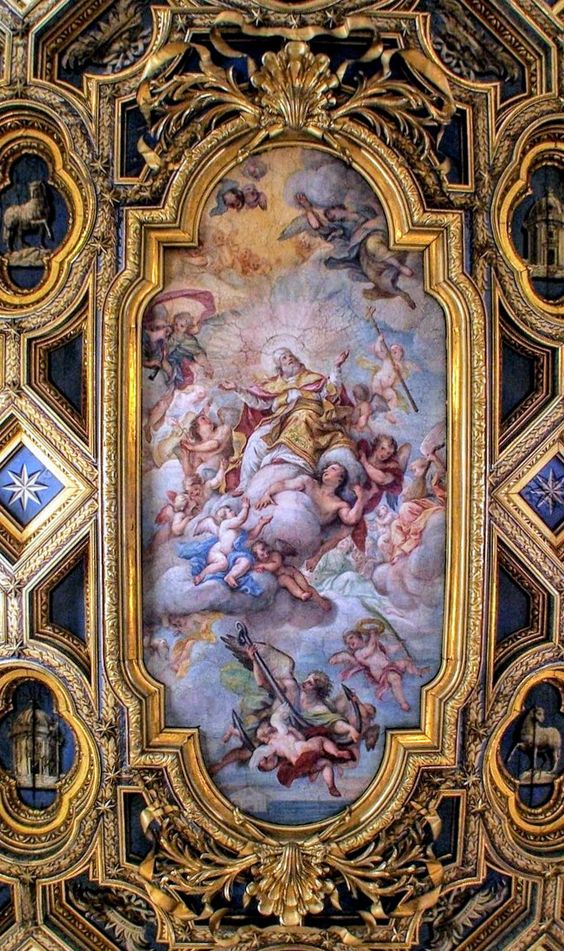 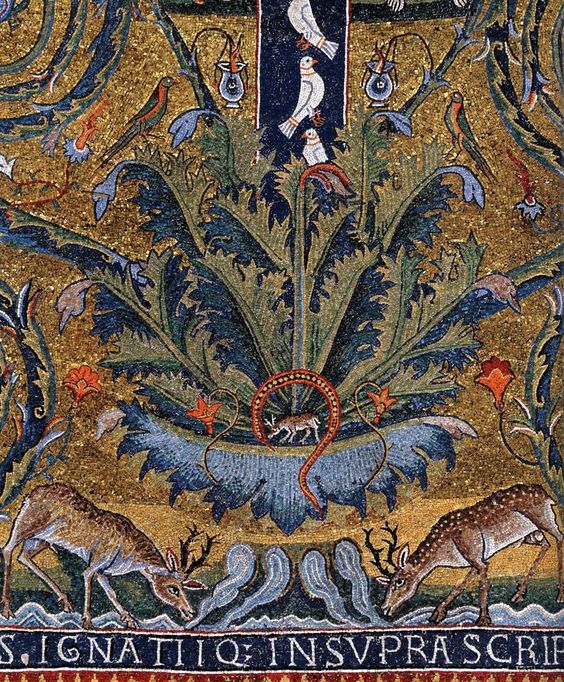 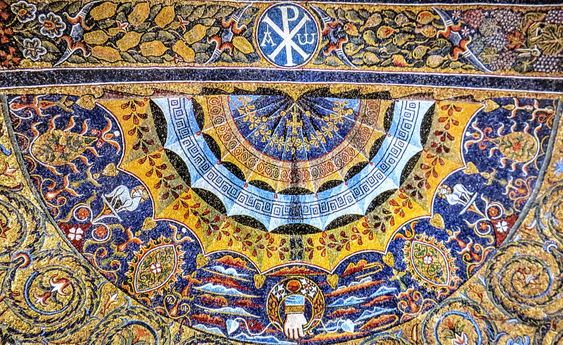 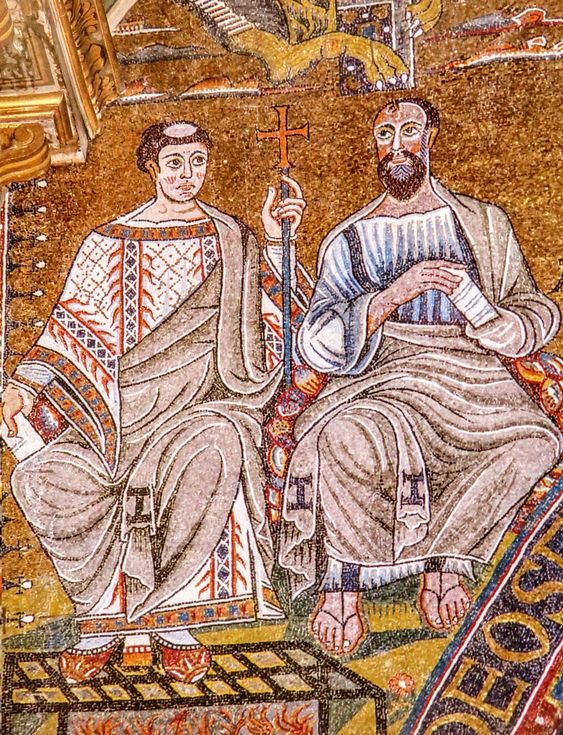 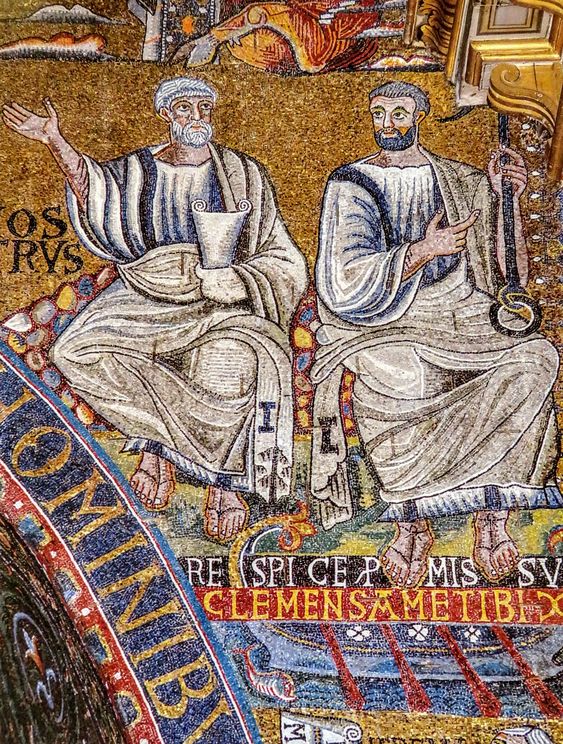