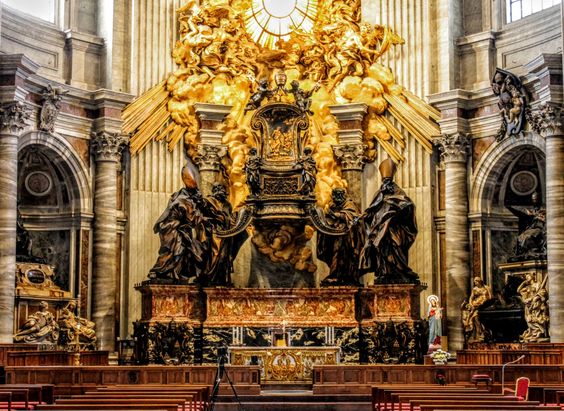 The apse is dominated by Bernini's Cathedra Petri (Chair of St Peter), a gloriously ornate reliquary, which holds a wooden throne once believed to be the one on which St Peter himself sat as bishop of Rome. This was still the prevailing belief in the middle of the 17th century when Pope Alexander VII (r. 1655-67) commissioned Bernini to create the reliquary.

Although it is now known that the chair only dates back to the 9th century, the Feast of the Cathedra Petri is still celebrated each year on February 22nd to commemorate St Peter's teaching in Rome.

The four gigantic bronze statues depict doctors of the Latin and Greek Churches. The two outer (and slightly larger) figures are St Ambrose and St Augustine, while the two inner figures are St Athanasius and St John Chrysostom.

The Latin inscription on the frieze, ‘O PASTOR ECCLESIAE TV OMNES CHRISTI PASCIS AGNOS ET OVES’ (‘O shepherd of the Church, thou feedest all the lambs and sheep of Christ’), is an adaptation from the Gospel of St John (21:15-17). The Greek inscription has the same meaning. 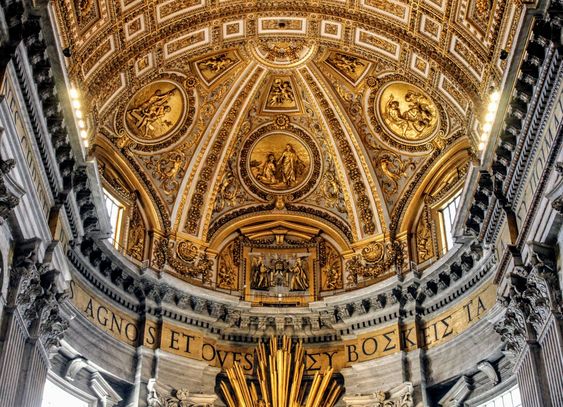 Vault of the apse